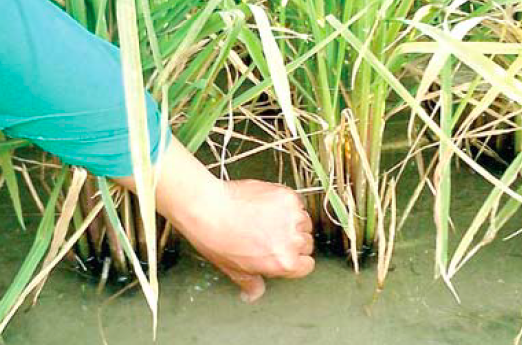 Batac, Ilocos Norte—Rice farmers should maintain a 2-inch deep water level for their crop just after transplanting until the time when the panicles are almost ready for harvesting. This irrigation technique provides more advantages to them and to their plants.

This is the advice of Jovino L. De Dios, an irrigation management expert from the Philippine Rice Research Institute (PhilRice), to farmers preparing their ricefields for the next cropping season.

De Dios said this controlled irrigation technique will continue to hasten the recovery of the transplanted seedlings in the same way as when they are given the traditional amount of water. But his technique is sure to give farmers substantial savings in labor, irrigation costs, and other farm inputs.

In most parts of the Ilocos region and Central Luzon, where irrigation water is abundant during the rainy season, farmers generally apply the traditional amount of 700-1,500 millimeters (mm) of water throughout the vegetative stage of the rice plant. This is usually done at the harrowing stage, and lasts until the panicles of the crop mature.

But the PhilRice expert said that too much water during this period causes an adverse effect, both on the soil and the farmers’ pockets. Instead of helping farmers attain substantial profits, too much water results in increased irrigation costs without creating any additional benefits for the crop. In addition, PhilRice research showed that the excessive application of water to ricefields results in the plant’s imbalanced acquisition of zinc, which can affect its yield potential. “If farmers control the volume of water applied, they can save as much as 16-35 percent on irrigation and labor costs, including the fuel costs for water pumps used in irrigating the crop,” De Dios said.

Another experiment conducted by PhilRice showed that controlled irrigation improves the physical condition of the soil, strengthens the crops’ tillers, and prevents the loss of zinc that is usually caused by excessive flooding and leaching.

De Dios added that this controlled irrigation technique increases the yields of farmers in areas with a limited supply of water for irrigation, or in areas where farmers depend on deep wells as water sources, and in farms with limited zinc component.

De Dios said that although rainfall is abundant during the rainy season, farmers should still control the volume of water in paddies so that important soil nutrients will not be washed away.

Here’s how to do it. First, it is important to employ complete land preparation methods when the soil is still moist, but to avoid too much flooding. Cut down on the usual number of days used for preparing the land, limiting the entire process to just one week when the field has many rice stalks but is free of weeds. However, when the land has plenty of rice stubbles and weeds, land preparation can be done in three weeks. Construct small canals close to the ditches so that these can serve as impounding areas for excess water. The impounded water can be used later, when the supply of water for irrigation is low.

There are two dimensions for the small canals that farmers can use when constructing them. They can be 30 centimeters (cm) wide, which is just enough for the water to pass through, or they can be as wide as the width of a hand tractor if farmers want a faster flow of the water. This space is equivalent to the distance of 4-5 rows of transplanted palay seedlings.

During the entire life cycle of the rice crop, the PhilRice expert recommends five-time irrigation frequencies. This means that rice plants are first irrigated at 7-10 days after transplanting (DAT). In this period, the seedlings are expected to have attained initial recovery. Maintain a 2-inch depth of water for every application, roughly equivalent to the length of the thumb. As soon as the right volume of water is attained, replant the missing hills.

De Dios said that water is very important in the first 10 DAT. This is the period when the seeds of weeds start to germinate. The application of water will prevent their emergence. Despite this, farmers should still apply pre-emergence herbicide at 1-3 DAT. If this is not possible, apply post emergence herbicides as soon as the weeds have germinated, instead of at 10-15 DAT, or 1-3 days before the second irrigation, which is the usual practice of farmers.

Remember to strictly follow the method for applying herbicides as provided on the label of the kind being used. Why? Because there are herbicides that should only be applied to flooded farms, and those that should be applied only on drained soil.

The second irrigation should be done at 5-7 days after the first irrigation. The soil must contain just the exact amount of water that the palay needs within seven days of the next irrigation schedule. Using this technique, less water will be wasted—only about 16-25 percent on farms with pulverized soil, and about 31-35 percent in ricefields with medium-textured soil.

Seven days after the second irrigation, it is expected that the farm will be drained; thus, farmers should apply the third irrigation. Again, let the water drain within 7-10 days. After this period, irrigate again.

Repeat the whole process until the panicles are almost ready for harvesting. Be sure to maintain the 2-inch depth, especially when the plants are in the panicle stage, so that the soil will not crack.

This controlled irrigation technique, according to De Dios, will control the incidence of weeds without affecting the yield potential of the crop, whether it is the hybrid or inbred variety. If the crop does not receive the right amount of water in the last portion of its growth cycle, its flowers will not be fertilized very well, and this will make them produce panicles with unfilled grains.

De Dios said that rice plants should receive the exact amount of water they need from the tillering stage until the hardening of dough stage. He even recommends that farmers irrigate the field at two weeks before harvesting. In the same experiment he conducted, De Dios found that the yield potential of rice is not affected even when farmers apply irrigation only once every 14 days.

What’s more, farmers can save a lot if they practice the following techniques to supplement their efforts. For instance, if their soil is heavy clay, they can apply water at a depth of 5 cm once in every 14 days and after 10 DAT.

If the soil is hard-textured, just maintain a shallow amount of water throughout the plants’ life cycle. A 1-2 cm water depth is enough. It is the assurance of PhilRice experts that when farmers follow the controlled irrigation technique, they can save as much as half of the total amount expended on irrigation per cropping season, in addition to bringing back the good condition of the soil.