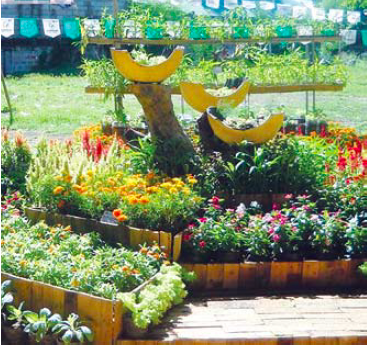 As part of its 141st Founding Anniversary celebration, the province of Tarlac recently held a three-day Food Festival and Agri-Trade Fair at the grounds of the Provincial Capitol in Tarlac City. Most of the province’s 17 municipalities and its capital city exhibited and sold their products at booths in the Fair.

Corporation (ABC) had the biggest space with its Edible Landscape exhibit, featuring plants grown in plastic pots, bamboo troughs, and various recycled containers suitable for urban gardening. The vegetables included upland kangkong, lettuce, pechay, arugula, mizuna and celery, and culinary herbs like basil, mint, oregano, coriander, and dill. The exhibit, which was easily the most visited by Fair attendees because it was the only one of its kind, also included a vertical garden or green wall of lettuce.

The Tarlac Provincial Agriculture Office asked ABC to put up the exhibit in line with its slogan, “Sulong Tarlac, Pagkain Muna (Forward Tarlac, Food First).” According to provincial agriculturist Edwina Tabamo, holder of a Ph. D. in Business Administration, Tarlac is focusing on food production, especially of short-term vegetable crops, to augment the incomes of rice farmers and the nutritional intake of local families.

“We implement programs to boost the production of vegetables, especially the green leafy ones and the pinakbet varieties,” says Tabamo. “Our leading vegetable producers are Capas, La Paz, Tarlac City, Paniqui, San Jose, and Victoria. All the other towns also produce quantities of fruits, vegetables, livestock, and tilapia from aquaculture, because our landlocked province is predominantly agricultural.”

She went on to say that the Philippine Rural Development Program is active in the province, focusing on promoting goat raising and camote, ginger, and mongo production among Tarlac’s farmers. The program, says Tabamo, is based on the belief that goats are the most suitable and economical animals that smallholding farmers can raise for producing milk to improve the nutrition of schoolchildren.

The province’s farmers grow sugarcane and are also emerging as the leading producer of white and yellow corn in Central Luzon. Several sugarcane farmers process their crop into muscovado, which is a higher-quality sugar for use by consumers. An unrefined brown sugar, muscovado is nutritionally richer than other brown sugars and refined sugar, as it retains most of the natural minerals that sugarcane juice contains.

The sugarcane processors also sold basi, a wine made from fermented sugarcane juice. Two other town booths sold bignay wine from the fruit of the bignay (Antidesma bunius) tree native to the Philippines (as well as India, Southeast Asia, and Northern Australia), that flourishes in thickets and occasionally in forests from Northern Luzon to Mindanao.

Research at the University of the Philippines at Los Baños’ (UPLB) College of Agriculture’s Food Science Cluster has found that bignay is the most acceptable of some 30 local fruits studied as materials for wine making, with bignay wine fast becoming the country’s premier exportable wine. A number of entrepreneurs in the rural areas nationwide now engage in bignay wine-making using the technical know-how disseminated by the UPLB College of Agriculture and the Department of Science and Technology.

Fruit trees abound in Western Tarlac, which has a hilly to mountainous topography. The towns of Capas, San Clemente, and Camiling have mountains, while all of the Mayantoc and San Jose towns are mountainous.

On the first day of the Food Festival, there was a cooking contest among the towns’ food preparers, who cooked up innovative meat and vegetable viands for a panel of food experts who stood as the contest judges. Guests and media organization representatives were later asked to sample the various dishes entered in the contest.

Controlled Irrigation Techniques has Many Advantages