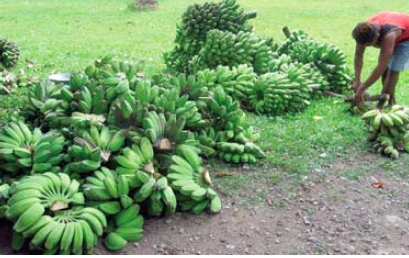 What’s so special about the native saba banana of Dingalan, Aurora, that fruit traders rush to place orders with local banana farmers of this variety?

In fact, instead of replacing their native cultivar with the latest Cardaba saba variety—which can be multiplied by tissue culture and developed, like in Mindanao’s commercial plantations—local banana farmers have continued to plant the native saba variety.

Dingalan municipal agriculture officer Zenia G. Abaya recounted that they have conducted training sessions and tried the recommended Cardaba cultivar, but local farmers find it too invasive and find that the new variety can easily ‘overshadow’ the local variety if placed alongside the native bananas.

The banana farmers also claimed to prefer the native saba variety because the fruits are fuller, meatier, and sweeter. The yellow color of the fruit is an identifying trait of the native banana variety. Traders find the local saba variety most ideal for processing into banana chips or catsup, or for use in local saba recipes.

Local saba banana production was first introduced by the Dumagat family decades ago. When the slash-and-burn farming method was banned, they turned to banana as their main source of livelihood. Local farmers improved their technology after trials, and innovations were introduced by research institutions at Dingalan.

Bender Umayam, a local farmer from Brgy. Matawe, farms coconut for fresh ‘buko’. He owns a 3-hectare farm along the slopes of Dingalan. Two years ago, he planted coconut trees at a distance of 10 x 10 meters (m).

Mature Dingalan saba bananas alongside the banana chip finished
products are a source of pride for Dingalan banana farmers.

Umayam sustained the production of his banana farm after adopting some technologies he learned from training sessions. Desuckering is one of the recommended practices he adopted. Instead of allowing the unchecked growth of suckers in his plants, he selects only three or four of the healthiest suckers. A robust and tapering banana sucker is his standard for selection. If suckers are too close, he allows some distance for replanting to form a mat. He repeatedly used desuckering and sucker selection to maintain production.

Another way he maintains production efficiency is through his practice of clean culture. He regularly cleans the weeds some distance from the base of the plants and gathers dried banana leaves, which he places at the base of the plants so that these can decompose there. He proudly says that local farmers in the area never apply commercial fertilizers to sustain the bananas.

In 2007, applied research on the scientific way of raising bananas was started in Dingalan, led by the Philippine Council for Agriculture, Aquatic and Natural Resources Research and Development (PCAARRD) through the Central Luzon Agriculture and Resources Research and Development Consortium (CLARRDEC) with active support from the local government unit.
They selected Bayani Ritual, a former municipal councilor and barangay chieftain, as the farmer scientist to conduct the study, with the guidance of the Techno-Gabay Program for the Science and Technology Based Farm (STBF).

The technology for banana culture was developed by a farmer scientist
who placed bananas along with coconut trees. By the time coconuts are
ready to fruit, bananas will produce for at least seven years.

The project aimed to showcase a banana farm using innovations/technologies as Science and Technology interventions. The interventions include clean culture, desuckering, and fertilization. The research Among the agricultural products produced in Dingalan, farmers favor native saba production as a secondary crop next to coconuts. More than a thousand hectares or some 80 percent of the municipality is devoted to native saba production, either as a monocrop or intercropped with coconuts, in the eight barangays of the municipality. Native saba bananas are usually planted at the start of the rainy season in Dingalan and are harvestable after 18 months.

The economic prospects of the native Dingalan saba cultivar encouraged the Department of Agriculture in Region III, headed by regional director Andrew B. Villacorta, to give assistance to the farmers by way of establishing a processing center for banana chips. A R1.2 million banana chip processing plant was established at the office of the municipal agriculturist. Farmers with excess production or those who wanted value-added income from banana production can freely avail themselves of the processing services. Other national offices like the Department of Agrarian Reform likewise established another processing center at Brgy, Matawe as assistance to the farmers.

As a thanksgiving ritual, the municipality of Dingalan headed by municipal mayor Zenaida Q. Padiernos annually conducts a week-long Saba Festival celebration, during which there are cooking demonstrations, and native saba products are displayed and traded to the visitors. This becomes an annual tribute to the farmers, and is a source of pride for the growers of the native bananas as a cash crop for most of the farmers of Dingalan.