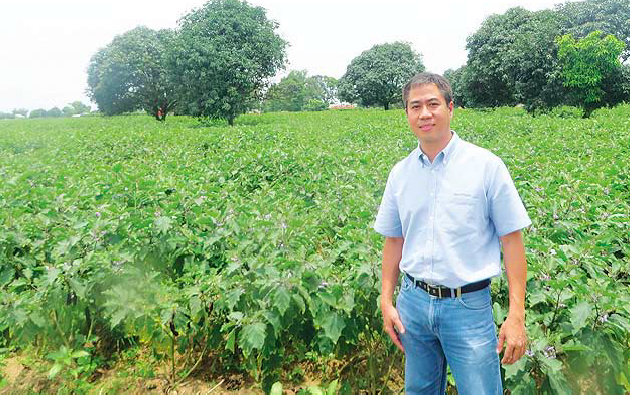 Farmers in a brangay in Gerona, Tarlac, where some 100 hectares are devoted to eggplant, are quite unusual in that they are practically growing just one variety.

This is Brgy. Santiago, where eggplant is the farmers’ main source of livelihood at this time of the year. We visited the place last August 10 upon the invitation of Carlos Saplala, who heads SeedWorks Philippines, which distributes hybrid palay and vegetable seeds.

Gerona, by the way, is a major producer of eggplant. About 500 hectares are devoted to eggplant in this town. And many farmers have switched to Prolifica-L, according to Simeon Bautista of SeedWorks. The company also distributes other hybrid seeds that include rice, sweet corn, finger pepper, and others.

When we arrived in Santiago, we were really amazed by the extent of the eggplant plantings. In one place, between a few big mango trees, was eggplant as far as the eye could see. All around houses that we passed by were beautiful stands of eggplant.

Alex Granil, the farmer who was the first to plant the Prolifica-L variety three years earlier, disclosed that in the whole barangay, no less than 100 hectares are devoted to eggplant. He stressed that out of the 100 hectares, perhaps less than three hectares are planted to other eggplant varieties. Practically all the farmers are sold on the new variety called Prolifica-L, including barangay chairwoman Bersame Granil, who has 15,000 plants.

Of course, Granil said that at first, nobody in the barangay wanted to plant the new variety. They were afraid they would not be able to sell their harvest. After all, they were already planting a variety that traders and consumers were buying.

True to his hunch, however, Prolifica-L became a bestseller. After the farmers saw that Prolifica-L even sold at a higher price than the older varieties, many farmers followed Alex. And now, three years later, practically every eggplant farmer in Brgy. Santiago is planting Prolifica-L.

What do the farmers like about Prolifica-L? Simeon Bautista, SeedWorks’ point man in Central Luzon, said that the farmers like the variety for a number of good reasons. One is that the new variety, which was developed by Indian scientists, is resistant to the bacterial wilt disease. This is a serious disease of eggplant and tomatoes; once infected, the plant will most likely die. The disease is particularly prevalent during the rainy season.

Being resistant to bacterial wilt is a very big advantage. Because of this, the farmers can grow this variety during the rainy season, when other varieties may not survive the rainy weather. Thus, Prolifica-L is suitable for off-season production, which is great because off-season harvests command a high price.

That is really true. At the time of our interview, which was during the rainy season, eggplant was already in short supply. And that is why the Santiago farmers were selling their harvests at Php58 to Php60 per kilo. That’s way above the usual Php16 per kilo when there is an oversupply during the peak season.

Another reason why the farmers like to grow Prolifica-L is that, true to its name, it is prolific. Maximo Jose, a 45-year-old barangay kagawad, attests to this. He planted 6,000 plants on a half-hectare field on April 25 and started to harvest on June 25. During the first picking, he got only 100 kilos. However, by the second harvest, he got 250 kilos, which increased to 350 kilos by the third picking. Harvesting is every four days. Up to now, he is getting a good harvest and because it is the rainy season, the price had gone up to Php60 per kilo at the time of our interview.

There is another important reason why Prolifica-L has become a bestseller. It is now the favorite variety of vegetable traders like Marissa Soriano-Lingat, who buys 1,500 to 2,000 kilos of Prolifica-L from Alex Granil and other farmers in Santiago every day. Marissa delivers her goods to Pampanga, Olongapo, and the Balintawak market in Metro Manila.

Brgy. chairperson Bersame Granil and her buyer pose with the harvest for the day.

Planting eggplant can be a profitable proposition if done with proper timing—meaning, the harvest does not coincide with the peak supply. There is a big local demand for eggplant, and it has a relatively long productive life as long as it is given proper care, like adequate fertilization and watering.