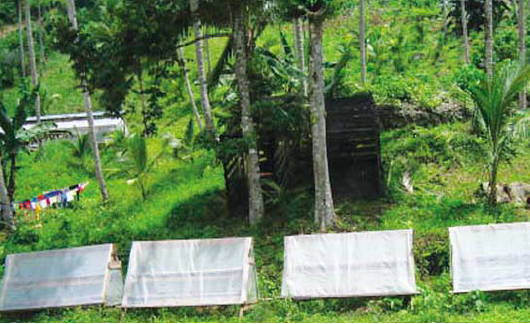 Cateel, Davao Oriental— A report by the National Disaster Risk Reduction and Management Council (NDRRMC) stated that the damages wrought by Pablo on the agriculture sector were estimated at roughly R26.5 billion of the total R37 billion worth of the typhoon’s damage. But in Cateel, a year and a half after typhoon Pablo destroyed coconut plantations in the area, what was once a scene of devastation has now been replaced by mushrooming hot chili farms.

“Most of the farmers here are dependent on coconut for livelihood. While the DA (Department of Agriculture) is helping them rehabilitate their coconut farms, there is a need for an immediate source of income,” said DA XI regional director Remelyn Recoter.

“Chili is (a suitable crop) as it is fast growing, highyielding, and (there is a) huge demand (for it) in the local and international markets,” Recoter said, adding that chili is a staple household condiment among the locals.

Officials of the Subangon Dumang Makers (SDM), a major chili processor, said they partnered with the DA to assist their growers, who had been adversely affected by Pablo. “Despite the disaster, we needed to go on with chili processing to continuously supply our existing institutional markets,” said SDM chairman Edgardo Arisola.

Recoter said they organized clusters of chili production areas, with each cluster covering at least a 3-hectare farm within a 10-kilometer radius. The DA, through its High Value Crops Development Program (HVCDP), provided 600 packs of chili as starter seeds, with each pack covering 1,000 square meters.

According to Recoter, based on the DA-HVCDP computations, a chili farm with an area of a thousand square meters can yield an average of 800 kilos of fresh chili. Net of the production cost, a farmer could earn R37,000 per cycle for an annual net income of R74,000, with only a small fraction of the land being utilized.

Subangon Dumang Growers Edgardo Arisola shows one of their products during the farmers’ exhibit held last May at the Department of Agriculture compound in Davao City.

“The seeds provided by DA have been very helpful as farmers were able to immediately start planting; damaged chili plantations were revived,” Arisola said.

“Were it not for the chili seeds, it would be difficult for us to recover from typhoon’s devastation as we still need to spend for our basic needs such as food and housing materials,” said SDM grower Junuel Batao.

Through the DA’s assistance, the number of chili farmers in the east coast of Davao Oriental dramatically increased from 247 to more than 1,500 growers. Anticipating a production surplus, DA-HVCDP XI provided UV plastics so that farmers could install tent-type solar dryers for chili processing, in addition to providing production management training.

The dryer from the DA reduced drying time from four-and-a-half days to only three days, another grower said. Juselyn Balilahon added, “Compared to conventional drying, the DA-provided dryer helped us minimize losses, as well as increasing our income.”

Balilahon earns Php22,200 per harvest of dried chili when it is priced at Php150 per kilo; fresh chili is only Php65 a kilo.

“Our participation in agri-trade exhibits eventually paid off as we were able to tap institutional markets such as Porky’s Best, Kablon Farms, and Green Mindanao, which use chili powder as one of the ingredients of their products,” Arisola said, adding that marketing outlets are now in place in several malls in the region.

He said Green Mindanao purchased 120,000 kilos of chili powder and brought it to Typhoon Yolanda-affected areas, where women were tapped to repack it.

“A product of typhoon Pablo-affected communities is helping in the recovery of typhoon Yolanda victims,” Arisola noted.
But the biggest boost to their sales came when Agriculture Secretary Proceso Alcala provided the necessary linkage for their association to secure a marketing contract with the Vegetable Importers, Exporters, and Vendors Association Inc. (VIEVA). The
said vegetable exporter has given SDM an advanced payment of R1.150 million for 2.5 metric tons of chili powder to be exported to Guam, USA.

Having heard in the news of how typhoon victims in the agriculture sector in Davao Oriental recovered thanks to chili production, Mayor Nazif Ahmad Abdurahman of Simunul in Tawi-tawi was inspired to enhance his town’s chili production.
In the Tawi-tawi province alone, there is already a huge demand for chili; a kilo of fresh chili gets a premium price ranging from R300 to R700 per kilo. The growers there are also eyeing Sandakan and Sabah in Malaysia as potential markets, as chili is part of every Muslim meal.

“For us Muslims, our meal is not complete without chilies,” Abdurahman said. “We need to expand production not only to meet the supply gap but also to give livelihood opportunities to our local farmers,” said Hadji Faisal Malande, general manager of Simunul Economic Enterprise (SEE).

The local government unit or LGU of Simunul sought the assistance of the DAHVCDP in the Davao region to provide them with training and technical assistance during the First Simunul Lara (‘lara’ being the local term for chili) Convention.

“While discussing the economic potential of chili in Simunul, we found that there is a ready market, not only within the province but also the nearby cities of Sandakan and Sabah in Malaysia, but they cannot yet cope with the increasing demand (for chili),” said DA Davao region HVCDP coordinator Melani Provido.

“To tap the neighboring Malaysian market, we linked the Simunul chili traders with Davao Oriental’s SDM during our farmers’ month exhibits in Davao City for the latter to fill up the supply gap,” Provido added.

“We are glad that DA has linked us with the Simunul LGU as we have again expanded our market, not only in Tawitawi but also with an export market, particularly Malaysia,” Arisola said. Recently, Arisola met with Chai Soon, the president of a groceries association in Sandakan, Malaysia, to discuss marketing arrangements for their product. “They have committed to buy
all our chili products on a barter trade scheme,” Arisola said.