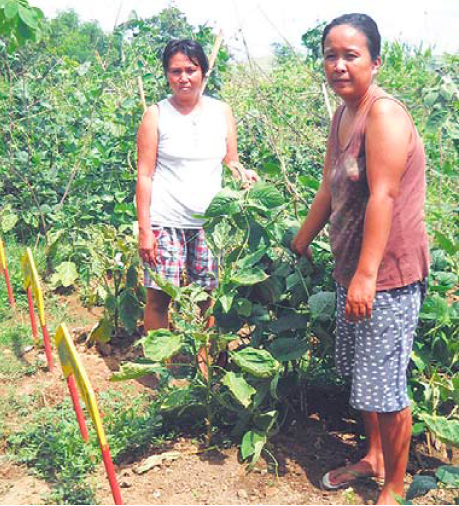 The answer to hunger can be found in one’s own backyard.

In 2011, vegetable gardens were established in three Gawad Kalinga (GK) villages in Cagayan Valley’s (Region 2) Isabela province, the leading producer of biotech corn in the Philippines. The funding from a donation by an agricultural biotechnology developer covered land clearing and preparation for the farm sites, seeds and organic fertilizer for the initial plantings, perimeter fences for the farms, and the allowances of volunteer agronomists who guided the beneficiary families in growing vegetables—many of them for the very first time in their lives. GK calls this food production aspect of its community-building initiative Bayan-Anihan.

Two of the Isabela villages are in neighboring towns in the northern part of the province that’s the country’s second-largest in terms of land area. The towns, Cabagan and Tumauini, are first-class municipalities between two cities that are two of the region’s five trade centers—Tuguegarao, Cagayan province’s capital and the regional capital to the north, and to the south, The GK village in Tumauini’s Barangay Namnama is the smallest of the three in Isabela, with only 30 homes and the same number of beneficiary families, but they have bigger Bayan-Anihan gardens.

Tumauini mayor Arnold Bautista, himself a farm owner, wanted the families to have a vegetable farm nonetheless. The standard initial garden size for each GK village family in Bayan-Anihan throughout the country is only 10 square meters. The Namnama families each cultivate 20 square meters. Bautista set aside a more-thanone-hectare area across the barangay road from the village for the families’ farms.

“The municipal chief executive, who assumed office in 2001, has shown extraordinary concern for his poor constituents,” says Cabillon. “He even designated a member of his office staff at the municipal hall as focal person for the GK beneficiaries.”

The Namnama village residents thus have two one meter (m) by 10 m plots each to cultivate. Their first crops were leafy vegetables like camote, saluyot, and upland kangkong. Later, they added eggplant, sitao, sili, squash, ampalaya, okra, and other pinakbet vegetables to their plants.

The extra space in the farm enabled the village association or Kapitbahayan to plant malunggay trees, chewing sugarcane, banana, and cassava at the farm’s perimeter. The association built two open-sided, cogon-roofed sheds in the lot. One is a spacious venue for meetings and for receiving visitors to the Bayan-Anihan project. The other shed is a smaller one in which tools are stored and farm wastes are composted.

Composting is for creating organic fertilizer for use on the vegetable crops, after the organic fertilizers provided by the donor for the initial plantings runs out. There will also be space in the farm’s highest point for a concrete water reservoir for the deep well pump that a Tumauini hardware and construction company has promised to set up soon.

“Adequately watering the mainly pinakbet vegetables that the village residents plant in summer is the problem here,” say GK Northern Luzon Area Coordinating Team member Armand Cabillon and Namnama Kapitbahayan overall leader Edilberto Lacerona. “The hand pump that they use often breaks down because it’s not designed for multi-family and heavy-duty use.”

“As a result, during the dry months our vegetable production suffers,” adds Lacerona. “We’re able to harvest a monthly average of only 392 kilograms from February to September, compared to more than double that average volume from October to January.”

Cabillon, an agriculture engineering graduate of the Isabela State University (ISU) who began as a GK volunteer in 2001 before becoming a regular employee in 2010, explains the significance of the vegetable farm. “In 2012, a year after their farm’s establishment, 11 of the 30 families of the village said they still didn’t have enough to eat. In late 2013, only three of all the families could say the same thing. Before 2014 is over, I’m sure everyone will have enough to eat because of their farm.”

In Cabagan town’s Barangay Magassi, there are 48 homes in the GK village. Rolando Mansibang heads its Kapitbahayan. The vegetable farm’s narrow area at the village’s southern perimeter necessitated the layout of the planting plots at 2.5-meter lengths. The families thus tend four plots each.

The vegetable growers do not have as much difficulty with water for their crops as the Tumauini GK villagers do because of Cabagan’s lower elevation. Another advantage that they enjoy is that their barangay is near the Cabagan campus of ISU, and horticulture experts of the university regularly come around to advise them on growing their vegetables well with the limited resources at their disposal.

Cabagan is only slightly smaller in land area than Tumauini, which lies south of it, but it has a much lower population density. It also generates more commercial activity than the latter, having even served in the past as the business center for three neighboring towns east and north of it.

Cabillon says that the beneficiaries in the three GK villages have become more than ready for the next phase of the vegetable-growing scheme for the settlements, which is commercial vegetable production in an expanded area. This is especially true in the case of the Tumauini Village, which already has the space that it needs thanks to their town mayor. “In our next stage, it will really be ‘Goodbye gutom’, which is the GK slogan for the initial phase of Bayan-Anihan,” Cabillon says. “Our beneficiary families will then be able to avail themselves of a good livelihood opportunity, a development that I’m sure Mayor Bautista will welcome heartily.”

Regular GK donor and agricultural biotechnology developer Monsanto Philippines Inc. (MPI) funded the establishment of these vegetable gardens. GK is a non-government organization whose mission is to end the poverty of five million Filipino families by 2024. It works moves toward that mission by building communities of self-sufficient people, providing them with homes with vegetable gardens to help them in their daily subsistence. Local government units and individual philanthropists donate the land for the villages and gardens in their respective localities. Private companies like MPI are the donors of funds for the construction of the houses and for the beneficiaries’ gardens.