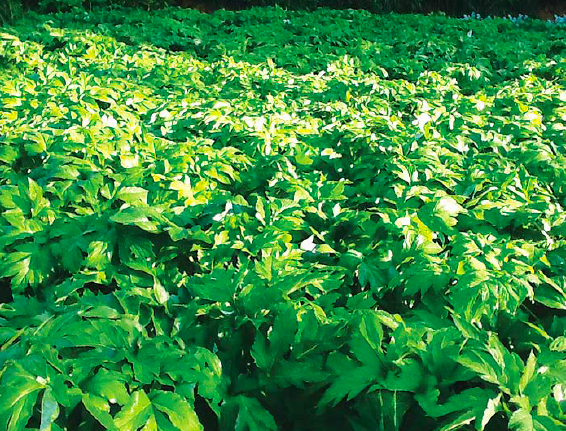 In the past few years, we have seen people selling, at a very high price, an herb that they have been passing off as ‘Ashitaba’. It is an herb, all right, but definitely not Ashitaba. We know some people pay as much as Php1,500 for a tiny plant in a small plastic pot, perhaps honestly believing it is the real Ashitaba that’s popular in Japan.

Now the real Ashitaba is here. It is being grown in commercial volumes so that hopefully, it will be more affordable soon, especially to people who have modest means.

Of course, that is the objective of Adela Ang, a cancer survivor who has taken it upon herself to establish commercial production of the real Ashitaba. She has a one-hectare plantation of full-grown Ashitaba plants in Benguet, and a new growing area is coming up in Cavite.

A Plant with Benefits

Reading the various articles about Ashitaba on the Internet, you will really get the impression that it is a miracle healing plant. It is claimed to be rich in an antioxidant called chalcone (pronounced ‘kalkon’) and is regarded as an anti-aging plant.

The plant, botanically known as Angelica keiskei, is a relative of the celery that you and I know. It can be cooked just like some vegetables—chopped and used in soups, stir-fried, and steamed—or eaten raw.

The main selling point of Ashitaba, however, is its supposed medicinal properties. To quote a source on the Internet: “The Ashitaba is rich in compounds that aid in fast healing. This is topically used to curb the spreading of infectious bacteria, cysts, pustules, boils, and athlete’s foot, and they can work against various serious fungal infections too.”

The article says that Ashitaba plays an important role in purifying the blood and works as a pain reliever and as a digestant, speeding up digestion.

We remember Adela Ang displaying beautifully grown Ashitaba in black plastic pots during the horticultural show early this year at the Quezon Memorial Circle. One plant was tagged at Php3,500. That was a stiff price, I was very sure, and we didn’t see any buyer.

Well, that was actually her intention, as she explained to us lately. She just wanted to show to the public the real Ashitaba so that they will no longer be fooled into buying the fake one. Placing a high price tag was also intentional so that her stocks will not get depleted because she wanted to multiply them in big numbers before releasing them
at an affordable price.

She wanted to grow her imported plants to become her mother plants for the production of seeds. And that’s exactly what happened. The one hectare in Benguet that was planted to Ashitaba produced a lot of fruits. And now she has plenty of seeds for planting, not only for herself but also for those who are interested to grow Ashitaba as a hobby or as a commercial undertaking. Recently, Adela went to Taiwan to train in the processing the different parts of Ashitaba for wellness products.

She has acquired special slicing machines, cool drying equipment (no heat is involved), and other facilities. She is bent on producing Ashitaba tea with chalcone. Chalcone, she said, is plentiful in the flowers. It is also obtained from the sap of the stems. Because she will have plenty of flowering plants, she will harvest the flowers for the chalcone that she will incorporate in her teabags.

Adela is contemplating selling the Ashitaba tea at a very affordable price, say, R99 per box of 10 sachets. She will also be selling plants at affordable prices to the moneyed as well as those with limited means. Although Ashitaba will thrive best in the cool highlands, she is also experimenting on how best to culture the plants in the lowlands.

If the celery could be grown in the lowlands, the Ashitaba could also grow there with proper care, she believes. She is experimenting with the use of a bio-organic foliar fertilizer as well as a Power Grower Combo to accelerate the growth of her seedlings as well as mature plants.

The company that commercially produces Ashitaba products in Indonesia reports that it was a big challenge for them to grow Ashitaba under the tropical conditions of that country. What they finally did was to buy a farm at an elevation of 1,000 meters above sea level.

They have come up with their own technique of producing Ashitaba in which no agricultural chemical is used. Every process of soil preparation, sowing, permanent planting, and harvesting is done by hand with great care.

An Internet source recommends three options for using Ashitaba for the prevention of disorders:

1. Use one or two fresh leaves. Wash with salt water (if available), rinse with clean water, chew the leaves, and then
drink water.

2. Use one to two fresh leaves. Wash with salt water (if available), rinse with clean water, cut into small pieces, and
add to fruit juice. Drink a cup once or twice a day.

3. For dry leaves, boil in water. Drink one cup, 3 times a day. Leaves can be eaten after boiling.

There you are. We will update you on the latest local developments.