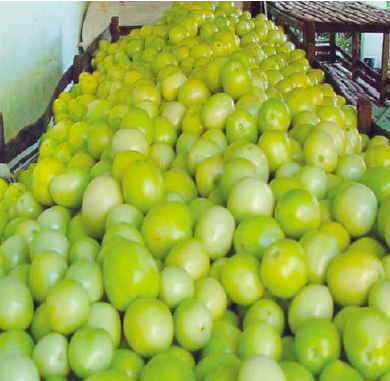 Batac, Ilocos Norte—Tomato farmers can prolong the shelf life of their produce if they harvest these at the mature green stage, mix them with rice straw, and store them in plastic sacks or paper boxes. This technique was proven to be very profitable for those who want to sell the fruits during off-season months when there is a limited supply of tomato.

In a test conducted by researchers Maura Luisa S. Gabriel, Marissa I. Atis, Aleta E. Dumaoal, and Zenaida H. Esteban of the Mariano Marcos State University (MMSU) in this town, tomatoes stored using the improved technique will last for more than two months with an extremely low percentage of rotten fruits. The containers, however, should be placed on an elevated floor with good ventilation, and with an ambient temperature which ranges from 26 to 34 degrees Celsius. Places with the ideal ambient temperature are inside ordinary storehouses built under shady areas with nipa or cogon grass as roofs.

The researchers said this improved storing technique for tomato could give farmers a substantial return on investment (ROI) of 129 percent per 10 kilos of tomato—higher by almost 50 percent than the ROI of traditional methods being practiced by tomato growers and traders, who store their fruits in bamboo crates, plastic sacks, and paper boxes without rice straw.

This is so because the price of tomato in Ilocos Norte falls to a farmgate price of R15 per kilo during March to April, when harvests flood the local markets. Some farmers who do not practice either of the storage techniques do not even want to harvest their ripe tomato because what they would spend on the wages of the harvesters is more than the price of their produce.

But with this improved technique, farmers could prolong the shelf life of their tomatoes and sell them during the off-season months, when the farmgate price is pegged at Php60 to Php80 per kilo.

The researchers tested the other conventional materials and methods of storing tomato used by farmers in Brgy. Quiling Sur, Batac, Ilocos Norte who were either tomato growers or fruit traders. The results were compared with those of the new technique that they were recommending to farmers.

The farmers were using ordinary bamboo crates and baskets, paper boxes, plastic ‘sando’ bags, and plastic sacks as packaging materials for tomato. But the difference with the improved packaging materials is that they used old newspapers as linings and coverings for the packaging containers.

This traditional method, according to researchers, contributed to an increased percentage in the rotting of the harvests; thus, farmers suffered heavy losses, especially if the fruits were not sold immediately—less than a month after harvest.

Farmers who stored their tomatoes the traditional way found that most of the fruits rotted after two months, which disastrously lowered the volume of marketable fruits. Fruits that rot earlier than expected affect those that are ripening, while many also shriveled because of moisture loss. However, the shriveled fruits were still sold, albeit at a much lower price.

The highest percentage of rotten fruits, which was about 61.33 percent, was observed among the fruits that were stored in ordinary crates alone, while the lowest, which was 3.75 percent, was observed in the fruits stored in paper boxes with rice straw. “That’s why we advise farmers to mix the tomatoes with rice straw before putting them in the recommended packaging containers, and to provide the fruits with proper aeration and minimum physical contact,” the researchers said.

The researchers also found that hanging the fruits, whether they were packed in plastic sacks or net bags with newspapers inside, will result in 10.67 percent and 16.26 percent damages, respectively.

Results further showed that the percentage of shriveled fruits was high in fruits packed in plastic sacks that were then hung up, about 17.33 percent. This was comparable with the damage rate for the fruits in net bags with newspapers which were also hung up (11.33 percent).

The smallest percentage of shriveled fruits was observed among those mixed with sawdust and stored in ordinary crates and paper boxes, about 1.33 percent and 2.29 percent, respectively. Most of the fruits there were already rotten; hence, the moisture in the sawdust from the rotten fruits prevented high transpiration from the other fruits.

The weight loss in fruits mixed with rice straw and packed in cartons was lowest (about 30.04 percent) after two months. This was comparable with the results for those fruits in plastic sacks that were hung up—about 32.49 percent—followed by those lined with newspapers and hung up in net bags (42.36 percent) and those in plastic sacks (44.61 percent).

Meanwhile, the lowest volume of marketable fruits was obtained from those stored in ordinary crates alone (22.51 percent) and in paper boxes with sawdust (21.63 percent).

In Ilocos Norte and some other parts of the Ilocos region, storing mature green tomatoes has become a perennial practice among farmers and traders who believe that they can derive substantial profits—especially if the fruits are still fresh—after several months of storing these.

Most farmers store their tomatoes in plastic sacks and bamboo crates that were used to carry grass for their confined or tethered livestock, thus increasing the risk that the harvest might be contaminated with pests, fungi, and other harmful organisms that were left behind inside the crates. Then, the packed fruits are either hung up or stacked in horizontal or vertical positions then placed in open spaces inside makeshift warehouses with roofs made of galvanized iron.

However, with the use of those traditional storing techniques, farmers reap receive low profits. To avoid this, farmers should clean the plastic sacks and paper boxes before use, and check to see if the fruits are free of damage caused by pests and diseases.

Prior to storing, rice straw must be collected from threshed panicles in rice paddies. These should be mixed with the
harvested mature green fruits at a thickness of about 2-3 centimeters (cm).