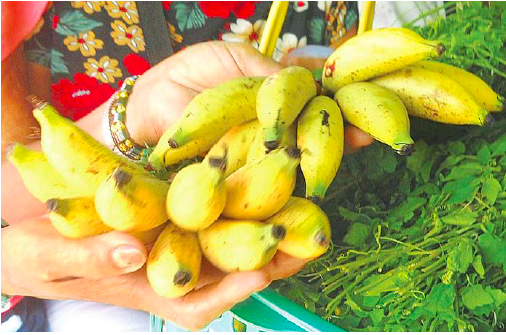 The Señorita banana is gaining popularity with some farmers up north.

Bananas, one of the most important food crops on earth after rice, wheat, and corn, are the most popular fruit in the world. They’re the perfect snack for people, especially athletes, because of their size and grab-and-go convenience. They retain their integrity when cooked and candied. Health-wise, they’re loaded with potassium, are high in carbohydrates for instant energy, and aid digestion.

In the Philippines, bananas are the ubiquitous fresh fruit dessert at lunch and dinner, and as merienda in the afternoon as fried and skewered banana-cue, or as sweetened ingredient in halohalo. Our country is one of the world’s largest producers of bananas because of our tropical climate, which is well suited for growing banana cultivars for our domestic and export markets. It’s said that we have more than 90 banana varieties.

Our most popular and most preferred fresh dessert bananas are Lacatan and Latundan, in that order. Quickly gaining opularity, especially in Luzon, is the small but sweet Señorita, which is also known in Surigao in Mindanao and in the Visayas’ Negros, where it is called various names, including the Spanish “Cuarenta Dias” (in reference to the average amount of time between the cultivar’s flowering and bearing fruits).

A Sweet but Fragile Variety

The Señorita banana is better accepted than Mindanao’s Cavendish variety, which is the banana that we export. Cavendish is the biggest fruit, has exceptional shipping and shelf life, and is available in many Metro Manila supermarkets, but many people say it’s virtually tasteless. On the other hand, Señorita, although very small and the cheapest-priced compared to Cavendish and Lacatan, is known for the extraordinary sweetness characteristic of the AA or diploid (having two similar complements of chromosomes) cultivars of Musa acuminata said to be native to the Philippines, although it’s also present in other Southeast Asian countries like Malaysia and Indonesia. Many people even say Señorita tastes a little better than Lacatan.

Señorita is one of the shortest banana cultivars, growing to a height of only 2.44 meters (8.0 feet) with a pseudostem girth of 42 centimeters (17 inches) at a height of one meter. The pseudostem is green and shiny with a pink-purple underlying color. The waxy leaves have petioles that are sometimes bordered with a range of colors from pink-purple to red. The inflorescence hangs vertically with red-purple bracts which are yellow or green on the inside. Male flowers are yellow and are persistent. The plant begins to flower about 231 days after planting. Flowering to harvest takes 54 days.

The fruits are 85 millimeters (3.3 inches) long and 34 millimeters (1.3 inches) wide, and weigh about 55 grams each. They’re straight with a rounded transverse section and a bottle-necked apex, and are light-green but turn light-yellow when ripe. The skin, which is very thin and easily cracks when overripe, peels easily. When ripe, the fruits self-detach from the stems and fall from their bunch. The texture of their flesh is soft. There are about 112 fruits per bunch weighing more
than eight kilograms and containing up to seven hands per bunch.

Señorita is seldom cultivated in large numbers due to its vulnerability to diseases, and thus its fruits are more commonly found sold in small stalls in markets. They have become popular treats for tourists, especially those visiting the Silang- Tagaytay City area in Cavite province. They’re always eaten fresh, as their relative fragility makes storing or transporting them over long distances very difficult. They’re neither processed nor used in cooking.

Señorita bananas used to be prevalent only in Luzon’s southern Tagalog provinces. Today, however, they have become regular items in the fruit stalls of markets in Bicol and Central and Northern Luzon. Farmers in northern Cagayan’s Lallo and Allacapan towns now produce the banana in commercial quantities. Ilocanos call the fruit Bullilising (Kulasisi in Tagalog) after the Luzon or Philippine Hanging Parrot, the mainly green, red-beaked, shorttailed bird that’s the country’s smallest parrot.

In Lallo’s Barangay Sta. Teresa about 12 kilometers east of the poblacion, Marcelo Columna, the village head, is the pioneer planter and the leading Señorita grower who’s encouraging and teaching his barriomates to be successful producers of the fast-becoming popular fruit. He has three hectares of a hilly area which he planted to 3,600 suckers or pups, the offspring of banana “trees” that form as rhizomes off the main trunk. The barangay’s hilly terrain is about 80 meters above sea level.

Asked how many Señorita “trees” he now has, Columna said that he can no longer count them all because of the numerous pups that the original 1,200 suckers per hectare that he had planted have produced.

“I began with only 30 pups, which my brother-in-law shared with me in 2002,” said Columna, who has been the Sta. Teresa barangay chairman since 2007. “I don’t know where he got the planting materials because I never cared to ask him in my excitement in planting a new banana. I knew bananas then to be a very good cash crop so I worked hard to multiply the number of my plants.”

His main market (his wife is the marketer) for the 900 kilograms of Señorita that he harvests each week are Lallo and the Camalaniugan and Aparri towns north of Lallo. “The farther market, Aparri, is about 30 kilometers away,” said Columna. “Camalaniugan is the town in between.”

Aparri, Camalaniugan, and Lallo are first-class municipalities, with the latter being the fourth largest town in Cagayan in terms of land area, but only the ninth largest in terms of population. Aparri, on the other hand, is only 10th in land area but ranks fourth in population.

The Columnas sell their Señorita to their buyers by the kaing, with each big basket weighing more than 50 kilos. Their gross sales amount to as much as Php8,000 per week. “Only some 70 kilometers away from Lallo is our provincial capital, Tuguegarao City, which is Cagayan Valley’s regional center,” said Columna. “It’s a big trading center and market and is the most populous of Region 2’s five cities. That’s why I want more of us in Sta. Teresa to plant Señorita. We have a big potential market for it, and this banana can improve our lives considerably.”

Columna and his brother-in-law have greatly profited from Señorita. The latter’s two children have graduated from college, with one of them now a nurse in London. He himself has had a concrete house built and bought two more hectares of land adjacent to his farm, planting the new site to coconuts intercropped with gabi.

He teaches his followers what he had to learn the hard way in successfully establishing Señorita in their fields. He advises them to select pups with at least one eye or potential sucker to plant 2.5 meters apart from each other. “In my experience, planting pups with one eye ensures the survival and good growth of new plants,” said Columna. “I’ve also found that the planting distance that I recommend is the best for the new plant in developing its own suckers that will replace it after it fruits and dies.”

He advises neophyte planters to apply a fistful of 14-14-14 as basal fertilizer per planting hole, covering this with soil before emplacing the suckers. Before the plants begin flowering, he directs them to side-dress with urea. For the plants to develop well, he prescribes clean culture in the planting sites. “Señorita loves surroundings that are always weed-free and uncluttered,” he said. “This helps a lot for them to bear fruit well. They also thrive in rolling land with very good drainage.”

His barangay-mates say they listen to him because they respect him and are grateful for what he has done and continues to do for their barrio’s wellbeing. Since they also produce a lot of palay and corn, the concrete solar driers that Columna has constructed in several sites have helped been very useful. Lallo is one of the four towns in the 11,000-hectare area being served by the National Irrigation Administration’s Magapit Pump Irrigation System that draws water from the Cagayan River. Magapit is a Lallo barangay.

Columna has also been responsible for erecting the barangay hall and two other buildings for health and social services, and for overseeing the implementation of sanitation, beautification and road maintenance projects—all these while striving to be the most successful Señorita producer in Lallo,/ He’s already won the Department of Agriculture’s Gawad Saka Award as Cagayan Province’s Most Outstanding High-Value Crop Farmer in 2011.