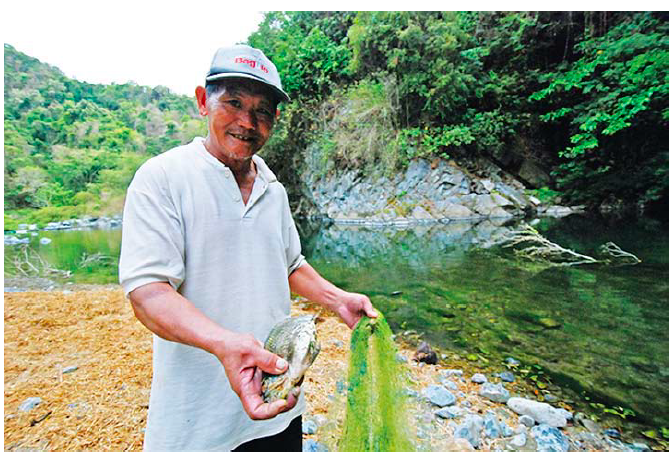 Combining old and new agricultural practices can mean more growth for the community.

These days, with a vast amount of information so easily accessible, it’s easy to discount the importance of indigenous knowledge and practices. The risk is that much of our indigenous knowledge may be lost along with the valuable practices it has on living sustainably is becoming more evident.

One indigenous practice that has survived through time is the lapat system of the Maeng Tribe in Tubo, Abra. ‘Lapat’, which means “to prohibit” or “to regulate,” is a century-old system of regulating the use of natural resources and its biodiversity.

2) communal ownership and collective responsibility; and

The system is enforced by the Dap-ay, a system of governance of the Maeng tribe for managing and directing the socioeconomic, cultural, political, and spiritual life of the people of the community. The Dap-ay mainly consists of elders.

In a place as distant and remote as Tubo, Abra, where the people are bound by their instinctive desire to conserve and protect their natural resources, introducing a technology that is different from their usual practice of farming and fishing seemed to be a far-fetched idea.

Led by the Bureau of Fisheries and Aquatic Resources-Cordillera Administrative Region (BFAR-CAR), the “CPAR on Tilapia Production in Fishponds” was implemented in the two barangays of Tubo, Abra, namely, Tubtuba and Dilong. For this CPAR project, 70 fish farmers were chosen as project cooperators.

“Initially, we introduced the concept of CPAR in Tubo, Abra with the aim of improving their existing culture of tilapia following a semi-intensive culture system. We would like to introduce an intervention that will not contradict their indigenous practice, which in this case is the lapat system,” explained Lois June B. Fermin, research manager of BFARCAR and CPAR project leader. She added that since CPAR is a research activity, the project aims to institutionalize participatory approaches in the conduct of research and extension, and encourage and enhance the development of enterprises and agribusiness ventures through enhanced tilapia production in the area.

Applying the Lapat System and CPAR in Tilapia Production

In Tubo, Abra, aquaculture is a promising industry. Given the difficulty of buying fish due to the area’s remoteness and the land barriers surrounding the community, people are learning to culture fish like tilapia—for which there is a commercial demand—both as a source of
food and livelihood, making aquaculture an important sector in the municipality. “They market tilapia in the adjacent communities and trade in the Poblacion, which is the central market area for Tubo,” said Fermin.

As part of the environmental practice of the lapat system, fish farmers in Tubo grow tilapia through the raceway system. The raceway system is implemented along the riverbanks. It divides a portion of the river where commercial tilapia are raised but not fed with commercial feeds, relying only on the available natural food such as bagiw or lumot (algae) and phytoplankton. The fisherfolk pile stones to divide the river into terraces which act as barriers to prevent the escape of the fish. This type of operation can be done by individuals, households, or a group of farm fishers.

As part of sustainable fishing, the lapat system prohibits and discourages the use of destructive fishing gears, chemical spraying near water bodies, and catching the young of fish species. It also promotes the observance of closed season or no fishing during specific periods of time. This kind of system enables the continuous reproduction of fish species, addresses resource degradation, and enhances the adaptive capacity of the ecosystem.

Part of the intervention of the CPAR project is the introduction of fishpond culture technology. “The fingerlings are stocked in the lapat raceway in the river in November or December. These are harvested before the rainy season to prevent the fish from being carried away by strong rains,” explained Fermin.

She added that because most of the fishponds are small, the fish get crowded when they grow; thus, they are returned to the raceway after the rainy season. “In April or May, they are transferred again to the fishpond until they reach their marketable size.”

Through the project, the BFAR provided a micro-hatchery in Tubtuba which became the source of tilapia fingerlings for the CPAR sites in Tubtuba and Dilong, Tubo.

One fish farmer who adopted the merging of the lapat system and the CPAR interventions is Carlos Paliwag, 63, a fisher-cooperator in Brgy. Tubtuba, Tubo. He is a member of the Tubtuba Farmers Association, which to date has 70 members, 15 of whom are CPAR cooperators.

Paliwag has been a farmer ever since he got married and owns a plot of land just a little under a hectare in size. He is into the integrated farming system, growing rice, vegetables, and tilapia. “I learned about the CPAR project when I was still a barangay captain. At that time, fishing was just an additional source of income,” he said.

“When I learned about the technology introduced in CPAR, my production grew. Not only did it provide additional income, it also became my family’s source of food. I don’t need to buy from the market as I can get the fish from my own pond,” he added.

As a CPAR cooperator of the project, Paliwag was provided with 1,000 tilapia fingerlings and eight sacks of feed for his pond. They were also trained by the BFAR on tilapia pond culture to ensure a good harvest. “I stocked the fingerlings in the Lapat for four months and then
transferred them to the pond, keeping them there for eight months before I harvested them,” he said.

As part of the Lapat principle, Mang Carlos practices the indigenous way of harvesting tilapia using tabokol (casting net) and lumtep (submersion). Given the demand for commercial fish species like tilapia, he markets his harvested tilapia within the community and neighboring
barangay. “I market 50 percent of my harvest and we consume the remaining half,” he said.

When asked about his returns from the project, he reported that from the 1,000 tilapia fingerlings, he was able to harvest an initial 100 kilograms. A kilo of tilapia (3-5 pieces) costs R150. This earned him Php15,000 for this harvest.

The repayment scheme is being handled by the association. In it, all farmercooperators are required to repay the inputs given to them to the community. This scheme is being implemented in every CPAR project so that it can be sustainable. Paliwag gave 250 fingerlings to other members of the association to help them start up their own operations.

Another CPAR cooperator who chose to be open to new ideas and respond positively to change is Paulo Pacdiw, 54, a fisher-cooperator in Dilong, Tubo. He owns around 500 square meters of land which is occupied by his five tilapia ponds. “Unlike farmers in Tubtuba, farmers in Dilong were less receptive to CPAR. Only a few agreed to be cooperators for the project. Mr. Pacdiw was one of the first four cooperators who adopted the technology,” said Fermin during a site visit to the area. Pacdiw is a member of the Dilong Farmers Association which consists of 25 members, four of whom are CPAR farmer-cooperators. As a project cooperator, he received 2,000 tilapia fingerlings and five sacks of feed.

He reported that from the initial 1,000 fingerlings he was able to harvest 20 kilos for the first season, which he sold at R150 a kilo. This gave him a profit of R3,000 profit for his initial harvest alone. He explained that he harvests his tilapia on a staggered basis and usually only if there are orders from buyers. “Eighty percent of my harvest is marketed; the remaining 20 percent serves as our food,” Pacdiw explained.

When asked about what changed when he became a CPAR cooperator, he said, “For one thing, my sources of income increased, so I was able to pay for the studies of our children. This also provided me with the extra money to expand my pond and buy additional gear and equipment,” he added.

Another positive result was that Pacdiw served as a model for his fellow fisherfolk in the community. He mentioned that they saw the benefits of applying the technology introduced in CPAR, so after a while, they got interested as well. Now, from the initial four CPAR cooperators, they became 14, with the additional 10 farmers who were encouraged by Pacdiw.

Palawan Fruits and Other Surprises at the 2014 Agri Fair