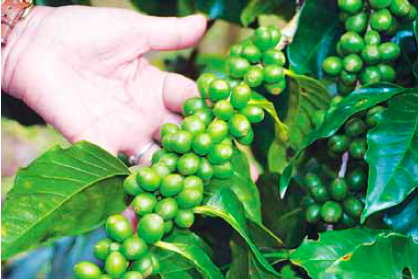 The attendees came from different parts of Luzon and Mindanao, and were comprised
of small-to-medium entrepreneurs, Department of Trade and Industry (DTI) Coffee Point Persons from nine regions, representatives from national line agencies, and local government units.

Director Myrna Pablo of the DTI-Cordillera Administrative Region (CAR) claimed that her agency is now implementing what she refers to as “from seed to cup” initiatives, which complete the menu of support for the region’s coffee industry. She added that the demand for coffee has become more challenging with today’s “Third Wave Coffee,” because its drinkers, who come from wide age ranges, prefer specialty coffee that carries with it the stories of the people and environment from which the coffee originates.

Prof. Valentino Macanes of the Benguet State University (BSU), who gave a talk on good agricultural practices for coffee, observed that the Philippines is blessed to have the four commercial varieties—Arabica, Robusta, Excelsa, and Liberica—since the country is within the ‘coffee belt’. Macanes stressed that there is a need to intensify farmers’ productivity by helping them with the appropriate technology. Accordingly, the Philippines ranks 110th in the world in terms of coffee production, and local producers cannot even meet the demand for domestic consumption. Macanes also lamented “…how we wish to bring back the old glory of being among the top coffee producers,” saying that the Philippines was the world’s fourth biggest exporter of the crop until 1889, when coffee rust hit the country.

With the Third Wave of coffee generation, through the proliferation of coffee shops and small coffee roasters, Macanes expressed hope that with Arabica as the most preferred variety in both the local and global market, local growers and producers from the Cordillera can make things happen. Besides, Arabica is considered to have medicinal properties, and is said to be good for hangovers.

Hirofumi Yamamoto, a Japanese coffee cupper and lecturer, supervises the actual sorting of green coffee beans prior to its roasting and tasting for quality evaluation during the Coffee 101 training in Sagada.

Hirofumi Yamamoto, a Japanese coffee taster who is attending agro-forestry classes at the BSU, discussed how coffee is selected worldwide through the meticulous screening of seeds. Yamamoto has the distinction of being a “cupper” or a professional who observes the tastes and aromas of brewed coffee, and he demonstrated how a brew is assessed through slurping freshly ground and roasted coffee beans.

Ngelangel added that coffee shops are places where people socialize; therefore, owners must also know the beautiful places of their locality, making the establishment a source of information. “Passion sells, and you have to make your brand memorable, original, and easy to recall.”

Maria Susana Edilo, a Tourism and Hospitality Industry Trainer and Consultant and Level 1 Barista certified by the Barista Guild of America spoke about specialty coffee trends and directions. She narrated how coffee drinking originated in Ethiopia through an accidental discovery by a goatherd who noticed the unusual behavior of his goats that nibbled on the bright red berries of a certain bush. From varied uses that range from medicinal to ceremonial drinks, coffee culture became global and it reached the Philippines in 1740 when it was first introduced by a Spanish Franciscan monk. Edilo explained that the roasting process produces the characteristics of the coffee, pointing out that even broken beans can affect a coffee batch’s overall taste because they burn faster. She also touched on Third Wave Coffee, in which customers and buyers are particularly concerned about the cultivation, harvesting, processing, and preparation methods and practices for coffee.

BSU Agro-Forestry Professor Valentino Macanes explains coffee topping to the Coffee 101 training participants by cutting the stem tops so that the plant won’t grow tall and berries will be easier to harvest. Partly shown in photo, observing, is DTI-CAR Director Myrna Pablo

The barista mentor encouraged farmers to implement good agricultural practices or GAP, and challenged coffee shop owners to create a culture of social and environmental responsibility by reducing the use of plastics in their espresso packs and to reuse ground coffee for other uses.

During the coffee farm tour and visit to local processors, Mayor James Edduba of Pasil town asked about the hygienic aspect concerning the Alamid coffee, referring to it as ‘animal manure’. Simeon Sibayan of Bana’s Café explained that the droppings of the civet cat from which Alamid coffee is made are thoroughly washed and manually cleaned as per protocols set on the high value exotic drink. Sibayan explained that of a kilo of fresh Alamid, only about 35% will be used by specialty shops, and it is sold in Manila for about R34,000-35,000 (though he sells it for far less).

Sibayan opined that while the Philippines can never compete with Brazil, we can add value to our products. “Quality has to be imparted to our farmers so that they will also improve as entrepreneurs and target the specialty coffee shop market,” Sibayan concluded. With the general understanding that coffee is gold from bean to cup, the fifty or so participants were convinced after the two-day training that indeed, coffee is one industry in which the Philippines can get a big break, especially with the Arabica variety.