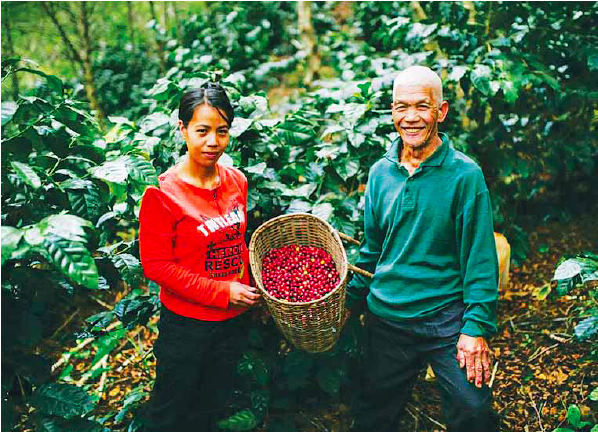 Coffee production has been identified as the banner program in the Cordillera Administrative Region (CAR) for a number of good reasons. As such, various agencies of the government as well as non-government organizations (NGOs) are collaborating for the program’s success.

Coffee can be a winning crop because the cool climate in many parts of the region is highly suitable for the production of Arabica coffee, which is considered to have the best flavor and aroma among the different varieties. Of course, the other varieties like Robusta, Excelsa, and Liberica are also suitable for growing in the hotter areas in the region, like some parts of Kalinga and Mountain Province.

Growing coffee is suitable for small-scale farmers who don’t have vast areas to grow the crop. They can take good care of their small plantings, as though these were gardens, so that they can produce high-quality beans. Arabica can be grown under pine trees and other species that can provide partial shade.

Another reason why coffee production in the Cordillera region can be a big winner is that there is a big shortage of locally produced coffee. Statistics show that 65,000 metric tons of coffee is consumed in the Philippines yearly, yet only 30,000 tons comes from local production. Therefore, there is a ready market for coffee that meets quality standards.

During a recent round table forum organized by the DTI in Tabuk City, the opportunities and challenges confronting the coffee industry in the Cordilleras were articulated. The need to upgrade production was especially emphasized.

Currently, the yield per tree is considered very low, so there is need for a sustained effort to teach farmers good agricultural practices (GAP) in coffee production. These could include proper seed selection, land preparation, proper distancing, fertilizing, irrigation, pest and disease control, proper pruning, proper harvesting, processing, grading, and so on.

According to Juliet Lucas, OIC of the DTI in Mountain Province, there is a lot of room for improvement in yield per tree. At present, most farmers get about 400 to 600 grams of coffee beans per Arabica tree in her province annually. On her own farm, she said, she gets an average of 600 grams per tree.

With improved practices, production per tree can reach 800 grams to 1.5 kilos of green beans per tree. A significant increase in income per tree can be achieved with GAP.

Green beans, i.e. when the skin and seed cover are removed, fetch Php200 to R250 per kilo. Thus, if a tree grown under GAP gives just an average of one kilo, the gross income from one tree will be Php200 to Php250 per year. Multiply that by 700 trees per hectare, and you get a substantial income from a hectare.

On the other hand, trees raised under ordinary farmers’ practices may give an average of only 500 grams of green beans per year. That’s just Php100 per tree. So there’s a real need for teaching farmers GAP.

In this connection, the different agencies are collaborating in holding Coffee 101, a seminar-workshop on the various aspects of coffee production, processing and marketing. One such workshop was held in Sagada last September 30. These workshops are regularly held in different provinces of CAR, attended not only by growers but also by processors, traders, and entrepreneurs.

Kalinga had its coffee glory days in the 1970s up to the early 80s. The province was the biggest producer of Robusta in the region, but farmers switched to other crops that gave them better income like corn. Coffee prices in the world market were high, but then a trader from Isabela is claimed to have monopolized the buying of the beans; this trader offered very low prices.

Engr. Domingo Kabilan of the office of the provincial agriculturist said that there are 438 hectares of new Robusta plantations in the province under the initiative of the DAR.

There are now thousands of hectares of young coffee trees that have started to bear fruit. Old trees that were neglected are also being rejuvenated. A total of 150 hectares has been rehabilitated lately.

Under the National Greening Program of the DENR, a total of 6,801 hectares has been programmed for planting in Kalinga. The DA will be providing 988,000 seedlings for planting in 2015, according to Kabilan.

Women in the Coffee Industry

The DTI, in particular, has been helping empower the women who are most active in the coffee industry. One way is by linking the producers to the market. One particular lady who has become something of a celebrity through the help of the DTI is Zita B. Degay, 61, of Bagumbayan, Upper Tabuk. She has become famous for her Kalinga Musang Coffee.

Zita started to process Musang coffee on a small scale in 2010. She was encouraged to pursue Musang coffee production when a former lady governor ordered nine bottles containing 400 grams each, and brought the same to Manila. Then a former vice mayor also ordered coffee from Zita for gifts to political supporters in Manila.

A couple of years earlier, the DTI came into her life. She was selected as one of the beneficiaries of the Rural Micro Enterprises Program (RUMEP) funded by the International Fund for Agricultural Development (IFAD) of the United Nations. She then underwent training in various aspects of operating a small business.

In October 2013, the DTI facilitated the participation of Zita in Coffee Origins, a national event organized by the Philippine Coffee Board. In this event, the public is invited to drink free coffee originating from different areas in the country. In that particular event held at the Greenbelt in Makati, three different civet coffees were offered for free tasting.

To Zita’s delight, her Musang coffee was the one favored by tasters. As a result, she was able to receive orders for Musang coffee worth several hundred thousand pesos. By the way, Musang coffee, which is also called civet coffee, is processed from berries that are eaten by the civet cat or ‘musang’ and excreted as whole beans. It is considered gourmet coffee and commands a very high price.

The orders began to pour in. Zita used the financial bonanza to buy modern equipment such as roasters that cost Php200,000 and a modern grinder (one for the Musang coffee and another for ordinary coffee). She has also improved her packaging to become at par with the big players in the market.

Zita continues to receive repeat orders from her customers. One executive of a well-known hotel in Manila has been ordering 100 pouches of her 100-gram Musang Coffee, which she sells for Php500 per pack.

In the meantime, DTI Regional Director Myrna Pablo said that DTI and other agencies continue to help stakeholders, who are mostly women, in improving their productivity, product quality, and marketing linkages. Every now and then, a program called “Coffee 101” is conducted in different provinces in the region. In these events, the attendees listen to experts who discuss GAP, including grading and processing of beans. The attendees are also taught how to start their own coffee business, and this has encouraged some of them to put up their own coffee shops.

At the recent media coffee tour and roundtable discussion in Tabuk City, DTI Assistant Secretary Ceferino Rodolfo emphasized that there are vast opportunities for trade in the ASEAN Economic Community which Filipino entrepreneurs can exploit. He said that ASEAN, with its 608 million population and combined Gross Domestic Product of US$2.3 trillion, is an attractive market and a powerful economic bloc in global trade.

Brewing and Understanding Coffee Inside and Out