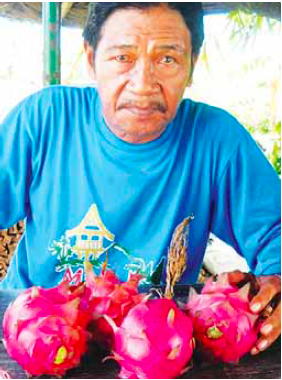 As a commercial fruit crop, dragon fruit has gained popularity among Filipino agri-entrepreneurs because of its good market potential, the relatively short time that it needs for fruiting (and thus, profitability), and the widely-available production technologies that have been developed for it.

Recognizing this, Mauro Daquigan, a civil engineer who runs a successful business building townhouses in Metro Manila, decided to invest in agribusiness in his hometown of Claveria in Cagayan Province by setting up a dragon fruit farm. He asked his cousin Baltazar Daquigan to be his industrial partner in the venture.

To get as much knowhow as they could about establishing a farm for producing the fruit, the cousins made several visits to the farm of Edita Dacuycuy, whom the Department of Science and Technology’s Philippine Council for Agriculture, Aquatic and Natural Resources Research and Development (PCAARRD) designated in 2008 as farmer-scientist for organic dragon fruit production.

Dacuycuy had established a nearly 10-hectare plantation in Burgos, Ilocos Norte that has become Northern Luzon’s showcase for the fruit’s production. Her undertaking has the support of the Ilocos Norte Provincial Agriculture Office and the Ilocos Agriculture and Resources Research and Development Consortium (ILARRDEC), one of PCAARRD’s 14 regional R&D (research and development) consortia throughout the country.

Claveria is the second-to-last town before the Cagayan-Ilocos Norte boundary, after which Burgos is next to the first two Ilocos Norte towns from the provincial border. Like Burgos, Claveria is a coastal municipality. There, Mauro Daquigan owns a seashore property of six hectares in the town’s Barangay Culao. For him, dragon fruit was the logical choice as a commercial crop to grow, as the plant thrives on sandy soil.

Setting Up the Farm

This is the section of Bang R Dragon Fruit Farm that was the first to be planted.

Mauro’s partner-cousin began establishing their farm in 2011, and the businessman decided to name it “Bang R” after his cousin. Baltzar “Bang” Daquigan began the project by fabricating some 4,000 concrete five-inch-square by seven-feet-long posts; two feet of the base went into the ground. Four iron bars extended from the top of each post to hold discarded motorcycle and tricycle tires in place to supporting the plants’ canopies. Anahaw slats forming a cross attached the tires to the posts.

Known to Ilocanos as labig, anahaw, or Palma Brava trees abound in Claveria. Anahaw wood has long been utilized by the townsfolk as extra-strong and durable lumber that can be split into slats for flooring. Their round leaves are for roof-thatching and wrapping food in.

Workers erected the posts at a distance of two meters from each other in rows 2.5 meters apart in the section of the farm that had been initially prepared for planting dragon fruit. “I opted for closer spacing and higher density planting at first so we could have income from the crop sooner and get returns more quickly,” said Daquigan, who is a retiree from the Department of Environment and Natural Resources (DENR), adding that he wasn’t worried about overcrowding because “…we still had more space available for our succeeding plantings.”

Procurement of planting materials followed the erection of the posts. For their first planting, Daquigan purchased Php120,000 worth of eight-inch-long Red Variety cuttings from the Department of Agriculture (DA) seed farm in Abulug, three towns eastward from Claveria. “The cuttings for the other sections would come
from those first plants later while we built more posts and prepared the other areas.”

He and two helpers planted four cuttings around each of the existing posts. They dug holes two feet in diameter and two feet deep six inches from the posts and filled each hole with clayey topsoil mixed with old sawdust and manure from a poultry farm in a neighboring town so that the cuttings would root well. The old sawdust came from a sawmill operated by a defunct logging company in Claveria where Daquigan had worked as forester before joining the DENR.

With the clay in the topsoil, the cuttings needed only minimal watering during the rooting period. The men planted the cuttings three inches deep in the holes and in such a way that each of these leaned towards one face of the posts.

When the plants developed immature stems after the 15-day rooting period, the helpers tied these to the posts with plastic straw to ‘train’ them up the posts while these grew aerial roots and attached themselves to their columns. They limited the growth of lateral shoots, allowing only two to three main stems to grow.

Before the plants began flowering they fertilized these with a mixture of dried chicken manure as organic fertilizer, 14-14-14, and muriate of potash, which they applied through the ring method one meter from each post. Daquigan saw to it that the plants each received a liberal dose of dried chicken manure at the rate of one sack for every three posts.

They began picking the first ripe fruits about 45 days after the plants flowered; Daquigan observed that the bright-green color of the immature fruits turned to red as these ripened, and they picked the fruits four days after the color of the terminal changed to full red and the fruits’ navel end swelled to the point that these began to show signs of cracking.

“We initially picked three kilograms of fruit per post. Because of our fertilization regimen with its liberal dose of organic fertilizer, we harvested fruits that weighed from 500 to 600 grams each. After the harvest period in November, we again applied the fertilizers. Experts say that a hectare of three-year-old plants can yield up to 5,000 to 6,000 kilos of fruit a year.”

The harvest volume grew steadily; in 2013 it was at 3,200 kilos. The fruits sold easily in Claveria and the neighboring town of Sanchez Mira with its bigger market; some were shipped to Metro Manila at the farm owner’s behest. Three sections of the farm have now been planted both to the red and white-fleshed fruit varieties.

“People who have tasted our dragon fruit say that its the sweetest of all in northwestern Cagayan, where several farms also produce the fruit at present—some established before ours,” says Daquigan. “Dragon fruit is
now popular in our province. Tuguegarao City, our provincial and regional capital, has become a good market for dragon fruit. I’ve heard that a farm in Allacapan town near Cagayan’s central part was the first to go into dragon fruit production, even before the establishment of the Dacuycuy farm in Ilocos Norte.”

Plans for the Future

Daquigan will continue planting more of the climbing cactus as soon as he can get cuttings from the first plants in the farm. He has also planted a large number of coconut trees throughout the property.

“Being beside the sea, we plan to try to develop this place into an agritourism destination, especially after the developer of the country’s first power-generating windmills in Bangui, Ilocos Norte carries out their plan to construct energy generators along the Claveria coast,” said Daquigan. “Kiosks on the sand dune hills between our dragon fruit plantation and the seashore can provide scenic views of our entire farm and the wooded hills studded with tall anahaw trees beyond it.”

Aside from preparing more planting sections for dragon fruit, there’s not much to do as far as the established and fruiting plants are concerned. Daquigan directs his helpers to regularly prune the plants for these to have open, easily manageable, and highly productive canopies.

“Our weeding procedure is simple and virtually cost-free. We just allow cattle to graze between the rows of Dragon Fruit. We need only to do minimal hand-weeding around the base of the posts.”

He employs only two regular helpers who live on the farm with their families in homes Daquigan helped them to build. “They are now on their third year with me and I cannot say anything unfavorable about the way they have worked,” says Bang. “Maybe it is because they are grateful that I took them from the irregular jobs they had in town that hardly enabled them to make ends meet for their families. Here, they even plant vegetables and raise native chickens for their table.”