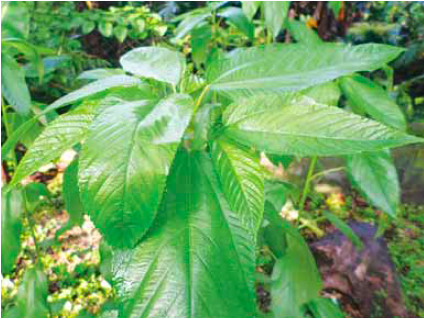 Last March, when we visited Bacolod City to attend the Panaad festival, we met Dr. Jose Medina, a retired professor from UP Los Baños. While sipping coffee at the home of a mutual friend, he mentioned what the Japanese claim as their best saluyot selection.

Perhaps, knowing that we are Ilocanos who love saluyot, he offered to give some seeds for me to try. He gave me a small packet that contained probably a hundred tiny seeds.

Because it was summer, we kept the seeds inside our drawer and momentarily forgot about it. Then it was June and when we were looking for something in our drawer, we happened to notice the packet of seeds. And since the rains had come, we scattered the seeds in a vacant space in a corner of our small farm in Teresa, Rizal.

After a few weeks, we went around the farm and to our surprise, we saw the seeds we scattered to have grown to about two feet tall. And to our amazement, the leaves were really big compared to those of the ordinary variety of which we also have a few plants. The leaves were double the size of the old variety. And as of October 4, some the plants have grown to eight feet tall.

In our excitement, we posted the big leaves that we harvested in our blog. And when Ronald Costales, the award-winning organic farmer from Majayjay, Laguna saw our post, he was equally excited. He texted me, ’Wow!’ upon seeing the big tender leaves that we posted. Ronald supplies a lot of organic vegetables to leading restaurants in Metro Manila and he must have imagined that if he could plant the Japanese saluyot in commercial volumes, he could also supply organic saluyot to supermarkets in Manila.

Saluyot is a favorite vegetable of the Japanese because of its reputed health benefits. It is said to be rich in antioxidants, minerals, vitamins, and fiber. The Japanese have been importing saluyot from the Philippines and elsewhere. Most likely, they have been making their own selections of saluyot strains.

In the Philippines, Ilocanos are particularly fond of eating saluyot. One common soupy preparation is saluyot leaves cooked with bamboo shoot and broiled dalag or catfish. It’s slimy but yummy. But our own favorite is saluyot cooked adobo style.

We cooked our first harvest of the Japanese saluyot this way. For a kilo of leaves, we added 10 eggplants that were cut in half, with each half sliced lengthwise into four pieces. We also added a dozen young okra fruits. To these we added two full bulbs of garlic, 200 grams of bagnet or its pork equivalent, vinegar and patis to taste, and two cups of water. We cooked the ingredients which were placed in the pot together at the same time until they were well cooked, with just a little water left.

The author and his 8-foot tall Japanese saluyot plants that
have started to form fruits. Photo taken October 4, 2014.

Of course, it is not just the Ilocanos who are fond of saluyot. When we visited the farm of Dr. Pablito Pamplona in Kabacan, North Cotabato, we saw a plot of saluyot with plants that appeared to have been regularly primed. Dr. Pamplona’s son Joseph told us that saluyot is also a favorite vegetable of his father. In the Visayas, our friend from Bisaya magazine, Richel Dorotan, told us that they also love to eat saluyot, which is called ‘tugabang’. What they call ‘saluyot’ is okra.

We know that many Tagalogs don’t eat saluyot, one of them an officemate. But when some Tagalog friends tasted our adobong saluyot, they kept asking us when we would let them taste our recipe again. Which means that the market for saluyot can be developed among Tagalogs. Fresh young leaves can be packed in Styropor containers and sold in supermarkets in the city.

Saluyot is easy to grow. Of course, when it is for commercial purposes, the seeds should be planted in plots that are properly spaced so that harvesting will be convenient, and management of the plantation will be easier.

The plant can be grown even during the summer months as long they are watered and regularly fertilized. We remember Reggie Bangui, whom we interviewed in Santiago City in Isabela more than 10 years ago. He was growing saluyot during the summer and selling 100 to 150 small bundles every day at Php4 each.

He sold everything to just one trader in the local market. He did not have any problem with marketing because there was no competition. There is no supply of saluyot from the wild during the dry season.

We intend to produce seeds from our Japanese saluyot so more people can plant it. Understandably, Ronald Costales was the first to make his reservation.