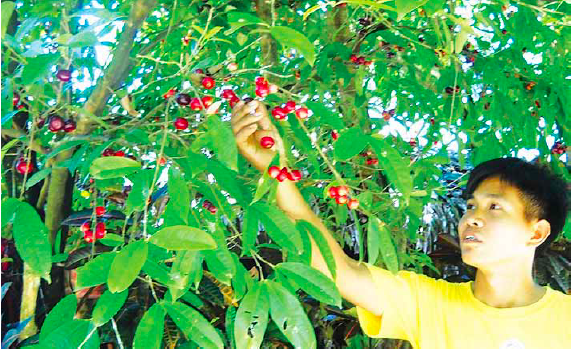 Mendoza sources seeds of Lubeg fruit and wildlings from a tree near the entrance to his farm for propagation purposes.

In 2013, Robel Mendoza of Claveria, Cagayan reached the national finals of the Department of Agriculture’s (DA) annual Gawad Saka Awards (GSA) as the Region 2 (Cagayan Valley) representative in the contest’s Young Farmer Category. He didn’t make it as one of the top three finalists that year but in the 2014 edition of the GSA, he made it as one of the top three national finalists in the same category.

Mendoza topped the provincial and regional phases of the Awards because of his integrated farming activities in a 9,016 square meter (sq. m.) area of his family’s land that he developed in the hills of Claveria’s Barangay Mabnang. He plants hybrid rice in a 7,500 sq. m. portion of the farm which is in its lowest area; in the remainder of his multi-level hillside area, he grows vegetables, raises tilapia and native chickens, and fattens hogs.

He fertilizes the hybrid rice with 14-14-14 and urea, planting two crops a year and harvesting an average of 6,500 kilograms per cropping. He is able to irrigate his ricefield and maintain ponds for tilapia because he has a well fed by a mountain spring that doesn’t dry up, even in the summer. The well has a diameter of two-and-a-half meters and a depth of more than three meters.

Mendoza provides the climbing plants with trellises for them to produce fruits of good quality. He fertilizes his veggie crops with vermicast produced in his vermiculture beds and carbonized rice hull (CRH) as organic fertilizer. For starting his plants, he uses a mixture of one part vermicast, another part comprised of CRH, and a third part of clayey soil as a medium for filling the seedling trays in which the vegetable seeds are sowed.

He waters the seedling trays filled with the growing medium, sows the seeds, and then places the trays in his rain-sheltered nursery. After the seeds germinate, Mendoza hardens the seedlings by gradually reducing watering frequency and exposing them to direct sunlight before transplanting them in his plots, to which he applies vermicast and CRH as basal fertilizers.

Mendoza sources seeds of Lubeg fruit and wildlings from a tree near the entrance to his farm for propagation purposes.

His vegetable crops yield well because of the vermicast from his vermiculture beds, which he supports with the manure of the hogs he is fattening (currently, there are four). He also fertigates the plants with ‘tea’ from the vermicompost and vegetable trimmings and kitchen wastes that he ferments with effective microorganism (EM) and molasses for a month. To deodorize his pigpens, he regularly sprays these with EM.

He sells some of his veggie harvests at his store in the family home along the provincial highway in their barangay, getting a modest income from the sales. “In summer, I earned a lot from selling my harvests of upo, patola, eggplant, ampalaya, and sitao,” he says. “For upo alone, I sold up to 10 pieces every week for more than nine weeks at Php25 apiece.”

Three ponds of about 100 sq. m. each are home to Mendoza’s tilapia; he grows azolla in a smaller one. His main use for the weekly harvests of the aquatic weed is for hog feed, supplemented with what’s commercially available. He fertilizes the ponds with chicken manure.

Adopting the semi-intensive culture method, he stocks the ponds with the nearly all-male, fast-growing, and high-yielding GIFT (Genetically Improved Farmed Tilapia) ‘super’ tilapia, supplementing the azolla with commercially-available feed. For small-scale fish farmers like him, the use of the GIFT Line raises yield potential and income generation from even small ponds, and it has encouraged many rural families to take up environmentally-friendly aquaculture. Mendoza bought the GIFT fingerlings from a private hatchery in San Mateo, Isabela.

In addition to maintaining his farm’s productivity and unspoiled environment, Mendoza is concerned with helping keep the hills of Brgy. Mabnang pristinely green. In his small nursery, he tends seedlings of anahaw, bugnay, and lubeg that he will plant at his grandfather’s two-hectare property just above the barangay road from the family farm. He collects seedlings of the trees from the numerous wildlings that grow from the fruits and seeds that fall from the trees.

“I also produce bugnay and lubeg seedlings from the seeds of both trees, especially when I have gathered all the wildlings that I can get,” says Mendoza. With his grandfather’s blessing, he has already planted a number of bugnay and lubeg trees on the old man’s land. He knows that the two indigenous trees’ fruits are among the most promising for making Philippine wines, which are beginning to be known and accepted in the export market. Bugnay or bignay wine is in fact reported to be the most accepted Philippine wine abroad at present.

Lubeg wine making has the potential to be another good dollar-earner. Much bigger than those of bugnay, lubeg fruits are clustered, round, and cherry-like with thick and fleshy rinds that gradually turn from red to violet as they ripen. Lubeg trees thrive in northwestern Luzon and are abundant in western Cagayan and neighboring Apayao, the Cordillera Administrative Region’s northernmost province. Apayao’s harvests of fresh lubeg fruit from some 1,000 trees are at an estimated 100,000 kilograms a year.

“I hope to be among the first farmers in Cagayan to produce bugnay and lubeg fruits in quantities sufficient enough and suitable for processing, which I will learn to do when the time comes,” says Mendoza, who notes that in Apayao, the processing of the fruits into wine, vinegar, and jam and jelly “…will help give my barangay-mates an additional source of livelihood.”

He recently bought a young heifer with which he hopes to start a cattle-breeding project in the future. “I bought the animal for Php15,000,” he says. “Cattle raising is another undertaking that I hope to show to our farmers as a way to improve their lives. I seriously aim to be a successful integrated farmer that my parents will be proud of.”

His parents sent him to college to take up a Bachelor of Science in Elementary Education degree. But after graduation, when he didn’t pass the government examination for teachers, he became disheartened and decided not to retake the board exam. Instead he worked as a farm hand to save money so he could develop his own farm, which he began to concentrate on four years ago.

“My father and grandfather are farmers and I decided to be like them,” Mendoza says. “But I will be a better one because of the new farming technologies that were not available to them before which I can easily learn and adopt today. My decision to be a full-time farmer instead of a teacher is turning out to be the right one. It’s motivating me to work harder and be more productive.”

Some Pointers in Growing Ashitaba

Smallest Cucumber Bears Fruits On and On!