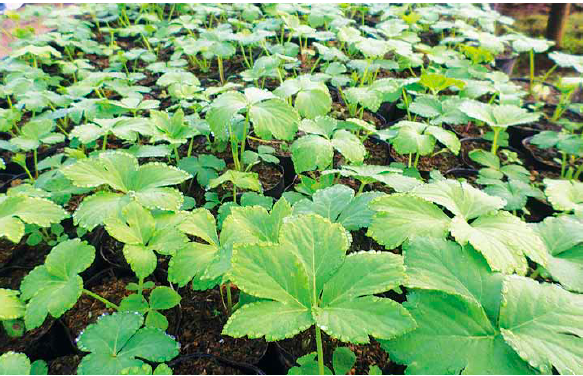 A lot of people are interested in Ashitaba, the herb with many medicinal attributes that we wrote about in this magazine’s October 2014 issue. Now that seeds and seedlings are available, the next thing enthusiasts would like to know is how to grow the plant.

Here are some pointers gathered from the very persons who have hands-on experience in culturing the medicinal herb under local conditions. The two are Adela Ang of Quezon City and Marvin Chagyo of La Trinidad in Benguet.

Adela is a cancer survivor who came up with the advocacy of making real Ashitaba available to ordinary people at an affordable price. Since 2012, she has done much research on the Internet. At the same time she went to Taiwan to acquire planting materials as well as to train on growing and processing Ashitaba products.

Marvin, on the other hand, used to be a strawberry grower before he was engaged by Adela to become a contract grower on his one-hectare farm in Lamtang, La Trinidad. He majored in horticulture at the Benguet State University and has done his own experimentation in growing the Ashitaba seeds as well as the plants that were imported from Taiwan.

One useful observation of Marvin is that seeds that sprout and grow very slowly. As per his experience, the seedlings take about four months to attain a height of a few inches.

Lately, however, he has found a way of accelerating the growth of his seedlings: by spraying the young seedlings (as early as when they have two leaves) with the Power Grower Combo developed by Alfonso Puyat.

This is the same formulation of plant growth accelerator that revived the orchids of Edna Viterbo that were damaged by Typhoon Yolanda—something we featured earlier in this magazine.

At first, Marvin sprayed Power Grower Combo on some of his Ashitaba seedlings while leaving some untreated. To the pleasant surprise of both Marvin and Adela, the seedlings suddenly become bigger and more robust. The same was experienced by Adela when her seedlings germinated at her former place at the Manila Seedling Bank (she has since transferred to a new nursery in Silang, Cavite).

Marvin showed us a portion of his plantation where the plants were not as robust. The reason, he explained, was that the area was lower and rainwater accumulated there. There was no adequate drainage, that’s what. And so he recommends that the plantation should be provided with drainage canals between plots.

Ashitaba plants are also sensitive to strong rains. Too much water can kill them. That is why when we visited Marvin, he was in the process of putting up posts for installing plastic roofing over the full-grown plants. That is one way of assuring unblemished leaves for processing into tea. Right now, they are harvesting leaves and stalks for making tea.

Adela is convinced that Tagaytay is a good growing area to produce leaves and stalks for processing. A couple of months back, they balled several hundred plants from Benguet and planted them in the new growing area in Tagaytay. During the first month, the plants looked stressed. Many of their leaves were yellowish.

Adela tells us that the stressed plants have now become vigorous and are producing big green leaves. The reason? She has been having those plants regularly sprayed with Power Grower Combo. In a month or so after our visit in late September, the leaves would be ready for harvesting for making Ashitaba tea.

Why flowers? Well, she says the flowers yield a lot of chalcone, which is rich in antioxidants. That’s what she will use in making premium Golden Ashitaba tea with chalcone. We are sure more experiments will be conducted to find out better ways of producing Ashitaba. One, for instance, will be to find a way of growing Ashitaba satisfactorily in the lowlands.