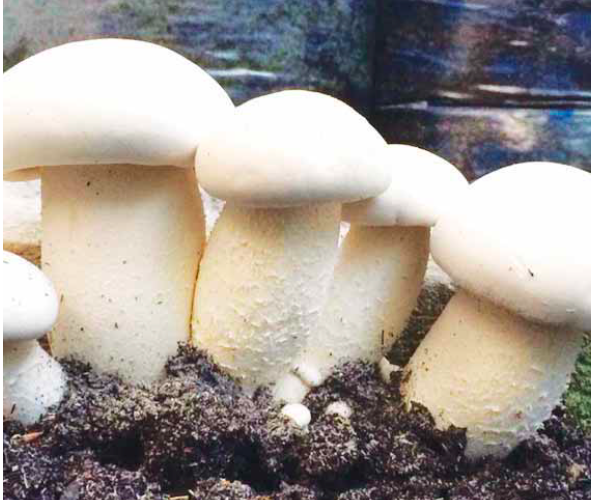 Looking for a business idea? Try growing the milky mushroom.

When she saw the feature on the Milky mushroom (Calocybe indica) in the October issue of 2013 of Agriculture magazine, Thelma Venoya, a former finance director of the Department of Agrarian Reform (DAR), became excited and immediately sought an audience with Rolita Spowart, the first to introduce the tropical strain of the mushroom to the country which originally came from India. She visited Spowart’s farm in Cavite and attended a day-long training session there.

Prior to undergoing training with Spowart, Venoya was into the commercial production of the pleurotus mushroom, on the cultivation of which she was trained two years ago by Emily Soriano, a national trainor in mushroom production of the Department of Agriculture based in Region III. At one time, Venoya maintained some 12,000 fruiting bags of pleurotus and harvested at least 100 kilograms per week.

Venoya’s experience in producing the pleurotus mushroom had its limitations. She found it hard to maintain the production of pleurotus at her growing houses in Pura, Tarlac the during summer months, because the crop required the maintenance of a minimum temperature of 28 degrees Celsius. It was also laborious and capital-intensive.

Milky mushroom has a lot of possibilities for commercial production, Venoya enthused, and she saw it as being able to provide an answer to the dearth in the supply of mushrooms in her processing activities for the two established food houses she had contracts with. Milky mushroom can be produced anytime during the year since the fungus can tolerate room temperatures from 30 to 45 degrees Celsius in a growing house. Milky mushroom has a better yield than pleurotus or volvarella mushrooms in growing plots or casings. Its shelf life can be extended up to 30 days under refrigeration.

The Milky mushroom is fairly new in the world of local mushroom growers. It is a robust, fleshy, milky white, umbrella-like mushroom which resembles the button mushroom. It is suitable for a hot and humid climate and can be cultivated indoors. It grows well at a temperature range of 25 to 45 degrees Celsius and a humidity of up to 80%. Milky mushroom can be cultivated in the Philippines throughout the year, unlike other popular species that require lower temperatures and less humidity.

Compared to those, the cultivation of the Milky mushroom is easier and involves fewer costs, with no need for a special growing medium or substrate. The main ingredient is carbonized rice hull (CRH), which can be easily processed. The growing process resembles the culture of the oyster mushroom using fruiting bags, except for the use of plot beds or casings as a medium for growth.

There were some innovations introduced by Spowart which Venoya adopted. One of them is size of the fruiting bags; the standard polythelene bags used in her growing houses is 6 x 12. The fruiting log preparation now measures some 12 x 24 inches.

Cylindrical fruiting logs are prepared layer by layer using rice straw. A layer of pasteurized substrate is laid and sprinkled with one tablespoon of spawn forming a ring in the growing substrate. The process is repeated until the cylindrical bag is filled, then it is closed tightly with cotton balls and rubber bands. The fruiting logs are incubated under semi-dark conditions in a clean room. The spawn run will be completed in 12 to 15 days at 30 to 35 degrees Celsius.

When the spawn run is completed, the cylindrical fruiting logs are cut horizontally into disks and placed side by side. The substrate is then covered with CRH to a height of at least half to an inch thick.

After planting, the beds need an optimum humidity of 80 to 95 percent, a room temperature from 25 to 45 degrees Celsius, and a light intensity of 1600 to 3200 lux at the at the cropping room. Proper ventilation for gaseous exchange is also essential in the growing house. The beds are regularly sprayed with water to maisntain a 50 to 60 percent moisture level.

Pinheads appear 12 to 14 days after sowing and the first harvest can be made six to eight days after pinhead formation. After harvesting, the casing medium is gently ruffled, lightly compacted back, and sprayed regularly with water. The second and third harvest may be obtained 45 to 50 days after casing; then the beds are removed and fresh beds may be kept after cropping. Three croppings can be maintained with fresh beds every two months.

One can harvest some 1.4 kilos of Milky mushrooms for every kilo of substrate. The edible fungus is a rich source of protein content at 32.3%. It reaches high market prices compared to volvarela and oyster mushrooms. It is suitable for drying, canning, powdered soup preparation, and pickling.

With less than 10 percent of mushrooms being produced locally, the introduction of Milky mushroom by Spowart and its cultivation by those who followed suit like Venoya is a positive step that will increase local mushroom production exponentially.

After training with Spowart, Venoya acquired a cylindrical fruiting log for Milky mushroom which came with the training module. Six months later, Spowart was surprised to hear that Milky mushroom was now being raised commercially in the country.

Since Venoya is familiar with spawn production, she asked Soriano if she could reproduce any type of mushroom using the technology learned under the latter.

All Venoya needed was a small chip from a grown mushroom to multiply it a hundred times using the the Potato-Dextose-Agar (PDA) substrate for rapid mycelium reproduction. When she learned that the technique would work, she quickly used it.

Six months ago, Venoya established the Mushroom Training Center and Production Site at Nanka, Marikina City. She partnered with John Pacheco, a self-made youth who by research and experiments established a name for himself in quality mushroom spawn production. Pacheco oversees the mushroom production phase of the partnership while Venoya handles the training courses, processing, and marketing. Her strategy is to train more people in mushroom production and to personally commit to absorb all mushroom production from the
trainees.

Training sessions are held on the third Saturday of each month and so far, six training sessions have been held, with more and more mushroom growers confirming their attendance. More than a hundred trainees have finished the course in five months.