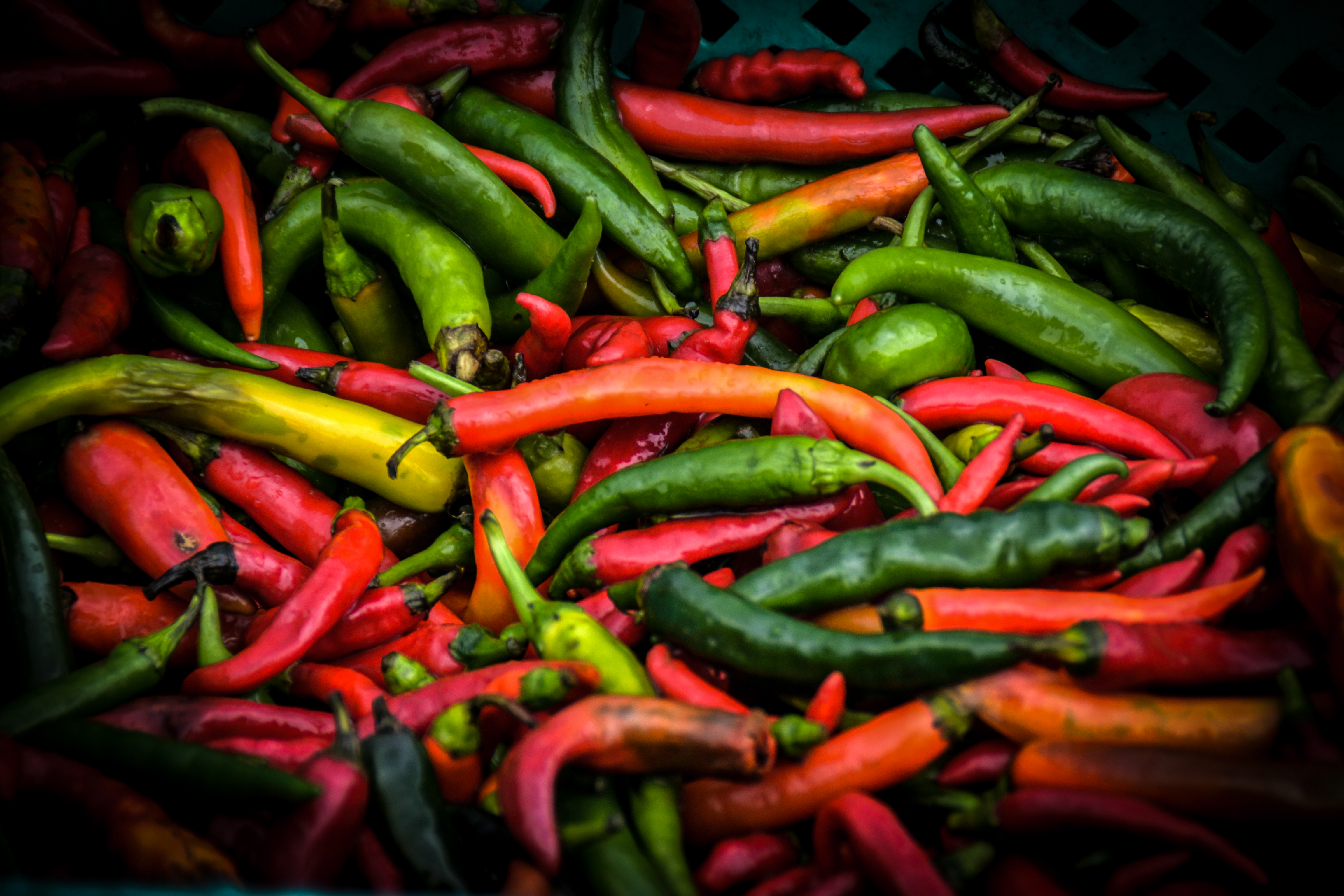 A lot of people, not just some, like it really hot. We mean the hot chilli lovers.

That’s what we found when we attended the first Chilli Festival and Bazaar recently in Quezon City that was staged by an informal group called Chilli Heads Philippines.

There, we discovered that there is a great number of people who are fond of hot food. And we also discovered that hot chilli is not only used in the traditional dishes that you and I know.

Did you know that somebody is making ice cream with hot chilli and other nontraditional ingredients? One version is made of chilli, ginger, and coco cream, and he calls it “Be Cool Express.” Other variants are chilli calamansi and tablea chilli.

At the festival we also saw wines infused with hot chilli. And according to the promoter of this group, Ponchit Ponce Enrile, somebody is also brewing beer with hot chilli. Beer variants include Sinturon ni Judas, Bicol Express, and Chipotle Ale.

Chilli Heads Philippines may be considered just an informal group of chilli lovers without the usual officers and board members. There are no elections and there are no membership fees. Therefore, there are no funds and elections to quarrel about. It’s just like the concept of the Agri-Kapihan that we started in 1986.

Ponchit is well known in the world of plants, both ornamentals and plantation crops. He used to manage the farm of businessman Danding Cojuangco in Negros Occidental. He and his wife also run a restaurant in Davao City. And currently, he manages a farm of another Cojuangco in Lipa City.

In 2013, Ponchit collaborated with a fellow who is well-known internationally as a chilli lover, and a young guy who is IT-savvy. The fellow, who is doing his personal research on hot chillis—planting and breeding the same, and linking with similarly-inclined people in other countries—is Dennis dela Paz. And the young man who is an expert in making web sites is Jay de Leon.

Jay developed a web site which announced to the world the goal of Chilli Heads Philippines. To the surprise of Ponchit and his collaborators, more than a thousand aficionados responded. These include planters, processors, chefs and other people who love to cook with chilli, people who love to eat hot food, and what Ponchit calls “usisero” and the “takot ako” type.

A total of 184 members participated in the first hot chilli festival and bazaar, plus non-members who were probably curious to know what it was all about. The festival was announced in our blog, zacsarian.com. Ponchit believes that more could have attended the event were it not for the rainy weather.

Many of the members brought with them planting materials, seeds, fresh fruits, processed items like different hot sauces, hot bagoong, wine, and many others.

The event was also highlighted by competitions. There was an offer of Php500 for everyone who could finish eating one fruit of some of the hottest chillis in the world. And a fellow who was able to finish two was Engr. Larry Cariño, an Ilocano who is better known as “Lakay Labuyo.”

Lakay Labuyo very slowly finished, bite by small bite, the hottest variety from India called Bhut Jolokia. It was at one time considered the hottest chilli in the world but it has been overtaken by other varieties. Considered the hottest chilli today, according to Ponchit, is Carolina Reaper developed by an American company. The other hot chilli that Lakay Labuyo ate was Seven Pot Primo, which is considered two times hotter than Bhut Jolokia. Well, Lakay Labuyo was awarded Php1,000 for his feat but he donated the sum to the group for its coming projects.

There was also a competition among sauces made of the Philippine labuyo. And the runaway winner was Paolo Clavecilla, who owns Traydor Hot Sauce. His three winning concoctions are Judas, Mata Hari, and Brutus.

Joining Chilli Heads Philippines can be rewarding in a number of ways. One can meet similarly-inclined people who can be of help in such fields as growing plants, processing the harvest, linkage to the market, and many new ideas that can be adopted for one’s own project.

After talking to a number of CHP members days after the festival, we have come to realize that chillis are more important to a lot of people than we had earlier thought.

And there are more superhot chillis than what you and I probably thought. Now we know why a lot of people like hot food, particularly those cooked with superhot chillis.

Dennis dela Paz, for one, confesses that hot chilli is addictive. There is a special sensation after partaking of hot foods. We are also reminded of a physician who is a Magsaysay awardee. When we asked him why the Thais loved hot dishes, he readily told us that chilli is very good for the heart.

Chilli aficionados don’t mind paying a high price for a small seedling when they see one. Just like Dennis dela Paz. He said that when the went to Cebu in 2008, he saw seedlings in a mall of what was then considered as the hottest chilli in the world – the Bhut Jolokia. He did not mind paying Php500 for the small seedling.

That experience in Cebu motivated him to collect more varieties from around the world, mostly from the United States. He searched for groups of chilli lovers in the Internet, of which are many, especially in the US. He has made friends with many of them from Florida and California. Although what he could only offer them was the seed of the Philippine labuyo, he was able to acquire many exotic varieties. Some of them were given as gifts to him.

Dennis has a collection of the hottest chillis numbering about 80, which he grows in pots in his garden in Makati City. It took some time to perfect his growing technique. Through his own experimentation, he finally found the right way to grow healthy hot chilli plants. He uses a porous growing medium that consists of coco peat, vermicast, perlite, and sand. He also applies supplemental fertilizers because the porous medium is not rich enough in nutrients.

Here is a sampling of varieties that Ponchit Ponce Enrile and other aficionados are growing.

TRINIDAD MORUGA SCORPION – It is a native of the district of Moruga in Trinidad and Tobago. On February 13, 2013, New Mexico State University’s Chile Pepper Institute identified the Trinidad Moruga Scorpion as the hottest chilli in the world, with a mean heat of more than 1.2 million Scoville Heat Units (SHUs) and individual plants with a heat of more than 2 million SHUs. However, Trinidad Moruga Scorpion has not been
certified as the hottest pepper by the Guinness Book of World Records. The measure of hotness, by the way, is in terms of SHUs.

TRINIDAD SCORPION YELLOW – This is a selection of the Caribbean Agriculture Research and Development Institute. A member of the 7 Pot family of superhot chillis from Trinidad and Tobago, it packs a mean over a million SHUs.

BHUT JOLOKIA – It was developed into a superhot variety in India and was until a few years back considered by the Guinness Book of World Records as the hottest chilli in the world. It was overtaken, however, by other varieties; considered the hottest today is the Carolina Reaper from the United States.

Ponchit says that a Filipino who is growing the Carolina Reaper is Julius Rellorosa of Malabon City. According to Dennis dela Paz, there are Bhut Jolokia strains not only from India but also from Pakistan and Assam. They come in different colors like red, caramel, and white.

MYSTERY CHOCOLATE – This is said to be a hybrid of an Assam Bhut Jolokia, Trinidad Scorpion, and Pot Douglah. It has dark brown papery skin. It has a high and persistent heat, according to Ponchit, who is growing it in Boy Tonio’s farm in Lipa City.

BRAINSTRAIN – This is a member of the 7 Pot family. It is extremely hot and very popular because of its strange, dangerous-looking gnarly appearance which is sought after by chilli aficionados. This is also grown at Boy Tonio’s farm.

CEBA RAWIT – This is an heirloom variety from Indonesia. It is popularly used in sambals as well as in table chilli. It is closely related to the Tabasco and Labuyo chillis. At Boy Tonio’s farm, Ponchit says he finds this open pollinated variety to be a super producer. The longevity of the plant is outstanding. Ponchit has
been planting this variety for about four generations now from the same few fruits he brought home in 2010. Ponchit says he has not seen any decrease in production.

ESCANDOR – This is a super hot and super fragrant chilli from Surinam. Ponchit has named it after Alex Escandor of Insular Botanical (in Lucban, Quezon), from whom he got the chillis through Toni Parsons.

PHILIPPINE LABUYO – The local Labuyo comes in different sizes and strains, depending on the region. Dennis dela Paz believes that he has collected the smallest Siling Labuyo that is just as big as a rice grain. He collected this from a roadside while visiting with friends in San Jose, Batangas.

HOT CHILLIS IN THAILAND – No doubt, the Thais are among the fondest eaters of hot food. And it is no wonder that East-West Seed Company is conducting breeding work on hot chillis for commercial production under greenhouses.

In February 2013, we were able to visit the five-hectare experimental breeding farm of East-West in Lamchang, Chiang Mai province. There, Henk Pascha, senior plant breeder, showed us numerous varieties and hybrids of hot chillis under development. There are plants with very tiny fruits. Others have extremely long fruits that are at least a foot long. There are dark red as well as yellow types.

Henk Pascha said that they are developing the long-fruited varieties for the China market. And he is also crossing the small-fruited kind with those with bigger fruits. The objective is to produce big fruits that are also superhot. For one, big fruits will yield more chilli powder. There could be other advantages besides higher tonnage per hectare.

There you are. If you are interested in hot chillis, better join the Chilli Heads Philippines. You will be happy you did. Ponchit Ponce Enrile’s number is 0917-300-1054.

Smallest Cucumber Bears Fruits On and On!