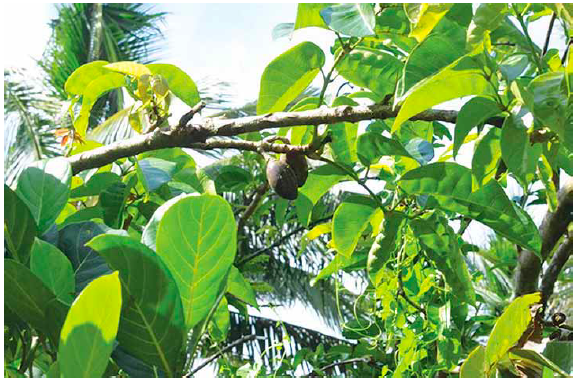 The ideal crop for the climate of Sorsogon, and for the senior farmer: that’s how Jose E. Amador, a 72-year old farmer, describes grafted pili after more than 20 years of successfully farming it.

Amador was a public utility jeepney driver when he began to harness the land passed on to his family’s care by his in-laws. He planted 4.5 hectares of this to kalamansi with his savings from his work as a driver. The kalamansi proved to be so profitable that in the 1980s, they bought the land adjacent to theirs, expanding their farm to a total area of 12 hectares.

When he planted about 10 hectares of his 12-hectare farm to the crop in Barangay Guinlajon, Sorsogon City over two decades ago, he pioneered grafted pili farming in the province, a place where pili nuts that fell to the ground normally grew without human intervention.

Initially, two of the 12 hectares were planted with grafted pili in 2006 with assistance from the Department of Agriculture, said Debbie Ferwelo, an agriculturist at the Office of the Provincial Agriculturist in Sorsogon. The pili trees in the original two-hectare area stand 10 meters apart from each other, while those in the other 10 hectares are set eight feet away from each other.

A small number of old kalamansi trees still line the farm. The septuagenarian farmer keeps them to clean the air and bear fruits for home consumption until they become unproductive, saying that the trees had been good to them since they reached three years of age. “Cash was flowing in. But after 10 years, production declined. You have to replant if you wish to continue.”

At first, Amador was reluctant to replace kalamansi with pili due to its height, which can rival that of old coconut trees. This makes it difficult for farmhands to gather fruits at harvest time. But he wondered if there was such a thing as grafted pili, since there were grafted fruit-bearing trees at the time. So Amador inquired from a relative who was an agriculturist about this. There was no such thing, he found; but after two years, the news came that grafted pili seedlings were available. “I bought about 300 pieces and planted them,” he said. “That’s how my grafted pili began in 1987.”

At the age of three years, the grafted pili trees started bearing fruits, albeit sparingly, Amador said; it takes another two years for the trees to increase their yield. “I do not regret farming pili. It is the ideal crop for the climate in Sorsogon. Maybe, I have about 800 trees bearing fruits year-round.” In addition, Sorsogon has rainfall throughout the year, ideal for growing pili, noted Esteven D. Garcia, an agriculturist at the Office of the Provincial Agriculturist.

Amador pays 10 centavos a piece for harvested mature pili nuts. His farmhands prune the branches while harvesting. The fruits are gathered and soaked in water for two days to soften the pulp before peeling, using a combination of simple implements.

After being de-pulped, they are transferred to a solar dryer and layered evenly in the sun. “It requires three days of good sunlight to get the proper moisture for storage,” he noted, adding that the third day is crucial. Should the fruits get wet at this point, the quality is compromised. “Nuts in the shell are still good for up to two years.”

Pili nut candy abounds in public markets across Bicol. Vendors even sell
them in commuter buses.

Amador’s wife used to process their pili nuts into candy. But since she could no longer cope with the amount of labor required in processing due to her age, the couple opted to sell most of their harvest as “de-pulped” pili (pili nuts still covered with shell). Their de-pulped pili is sold for R40 a kilo to pili processors in Sorsogon. Their farm produces 300 to 500 kilos of de-pulped pili in a month. The empty shells, which are fed to stoves for home and commercial use, sell for Php3 a kilo.

Amador describes pili as a “centennial plant,” able to live and bear fruits for over a century. It does not require pesticides to repel or kill insects. Over 20 years, not a single type of bug has infested his pili trees. And similar to pili trees in the wild, his do not require fertilizer to bear fruits.

Garcia agrees that there is no known pest that attacks pili; even typhoons do not pose a serious threat. Typhoon Glenda merely shook Amador’s trees and, in a way, “plucked” their fruits. But only a few weeks later, their branches generated new flowers that would become fruits and be ready for harvest in about five months. In other words, pili trees are typhoon-resilient. Even better, the resin it drops on the ground helps root out weeds that compete with it for plant nutrition.

“All these make pili a crop like no other,” Amador said. “It gives no headache to a farmer. It’s just there bearing fruits on its own for generations.” He has reason to be grateful to the crop. Pili helped him and his wife send their two children to college, with one finishing medicine and the other, marketing. Today, the same crop is helping a relative through college. A farmhand was able to buy a tricycle with his savings from working on the farm.

Empty pili shells in a storage house. They are used as substitute for
firewood. A kilo sells for Php3.

Month-old papaya plants fill the spaces between the pili trees. Amador is set to plant more so that he can have a thousand papaya plants. He also has a small number of cacao trees and two cows he cashes in on. Each cow gives milk worth Php500 a day.

His grafted pili farming technique can be recreated by fellow farmers in Sorsogon and other provinces in the region and perhaps outside Bicol, Amador said. Lands planted to coconut could be intercropped with grafted pili since it does not compete for altitude. Aside from its livelihood potential, pili trees can also help reforest lands.

Farmers in the towns of Gubat, Castilla, and Donsol are currently replicating Amador’s grafted pili plantation, Garcia said; as an agriculturist, he says he is inspired by Amador’s success in encouraging and helping farmers harness their land with pili.

Amador is a candidate in this year’s search for “The Outstanding Farmers in the Philippines” (ToFARM), hosted by the Junior Chamber International Philippines (JCIP) and sponsored by Universal Harvester, Inc. (UHI).

Lots of Meat Lost to Smuggling