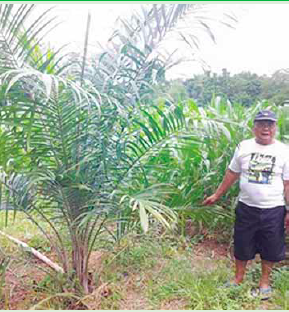 Overcoming poverty seems to be an elusive dream in the rural areas of the Philippines. This problem has its roots in low agricultural productivity, particularly in the 3.56 million hectares (ha) of coconut land representing almost a third of the cultivated croplands of the country. An Asian Development Bank (ADB) report shows that farm productivity in the Philippines is only US$ 340/ha/year as compared to US$ 650/ha/year for Indonesia, US$ 1,760/ha/year for Thailand, and over US$3,400/ha/year for Malaysia.

Poverty incidence in the Philippines is among the highest in this part of the ASEAN at 25%, compared to 13.3% for Indonesia, 7.2% for Thailand, and 3.8% for Malaysia. Among these four countries, it is only the Philippines, which will not be able to meet the UN Medium Term Development Goal (MTDG) of reducing poverty by half by 2015.

A World Bank report in 2012 cited the significant role of oil palm in helping overcoming poverty in Indonesia. The government of Thailand likewise credited oil palm to as having significantly helped the country overcome rural poverty, and the same was true for Malaysia. Large-scale oil palm plantations in these three neighboring countries has helped them become net food exporters, with vegetable oil in the form of palm oil being among theirmajor export food products.

Indonesia has now 10.6 million ha planted to oil palm; Malaysia, 5 million ha; and Thailand, 860,000 ha. The Philippines only has 72,000 ha planted to the crop. Yet Mindanao has almost one million ha of grass and brushlands which are highly suitable for oil palmagroreforestation for climate change mitigation.

The Philippines is still a net food importer with palm oil in the form of vegetable oil as a major import food commodity, currently valued at Php27.5 billion annually, and set to increase to over R54.5 billion in 10 years. To overcome this huge vegetable oil import shortfall, the Philippines has to increase the current area devoted to oil palm from 72,000 ha to 350,000 ha in the next ten years.If this is done, thousands of Filipino oil palm farmers will be liberated from poverty.

The Features of Oil Palm

Mutert (1999), a noted Canadian agricultural scientist,considers oil palm as the greatest crop of Southeast Asia. For decades, oil palm hybrids have shown great capacity to produce early and give a high yield of quality food in the form of vegetable oil with the highest vegetable yield/unit/area among the vegetable oil crops.

The vegetable oil yield of oil palm is five times that of coconut and more than ten times that of soybeans, sunflower, and rapeseeds (Table 1). Consequently, farmers growing oil palm in Malaysia, Indonesia, and Thailand have found oil palm to be an investment-friendly and easy-to-grow crop. Atypical oil palm farmer cultivating two ha or more is economically transformed and liberated from poverty in four to five years after planting.

The Model of the Province of Cotabato

The great capacity of oil palm to provide farmers with early high yield and income lies in the use ofquality hybrid seedlings. The seedlings, however, aresomewhat expensive for the poor farmer, as they are priced at Php200 to Php220 each. With 140 seedlings to a hectare, that’s a total of Php28,000 (Table 2). Most poor landed
smallholders, including agrarian reform beneficiaries,can’t afford to buy the seedlings.

To overcome this problem, the local government unit or LG of the province of Cotabato provides farmers with quality planting materials for free on a plant-now-take-care (PNTC) program, good for two ha or 280 plants (Fig. 3).Prior to seedling dispersal,the farmer–recipients are provided with intensive training on good agricultural practices (GAP).

The farmers then sign a contract in which they promise to take care of the plants to ensure high survival rates and early productivity. Farmers provide the labor and other expenses in establishment and maintenance during the first four years; these expenses are affordable.

Under the contract, if a farmer has low plant survival rates (below 85%) at the end of the first year, that farmer shall have to buy seedlings and replant these at his or her own expense to replace the dead plants, or pay the cost of the 280 seedlings he or she received. The land tenurial documents serve as a guarantee that a farmer shall abide by the contract. So far no farmeramong the thousand recipientshas failed to comply with the requirement of 85% plant survival during the first year. To ensure a corruption-free program, the seedling dispersal and the planting in the farms are documented.

As with the farmers in Malaysia, Indonesia, and Thailand, the Cotabato province program for oil palm seedling dispersal against poverty was duplicated with amazing success. Farmers growing oil palm using GAP enjoyed high incomes well above poverty threshold level. Theproduction of palm fruits started 26 to 28 months after planting, with the yield gradually increasing. Farmers were liberated from poverty; the economy of the beneficiary communities grew, and they became more progressive and peaceful. Successful farmers are emerging
from the municipalities of Alamada, Antipas, Midsayap, Tulunan, Matalam, Carmen, Mlang, and others. Thousands of farmers benefited from the PNTC program, which covered almost 4,000 ha.

More farmers want to participate, and the only limitis the availability of government funding. A two-ha farm provides a typical farmer with a net yearly income of Php108,000 to Php150,758, which is above the Philippines’ poverty threshold level of Php79,000. The palm trees remain productive for 25 or more years before replanting needs to be done.

The story of Jose Sagadan, once a poor Muslim farmer in Barangay Dungguan, Mlang, Cotabato, is typical; his poverty (brought about by the planting of low value field crops) prevented him from supporting his eldest daughter through college. He planted eight haof oil palm from 2000 to 2013 under the plant now, pay later (PNPL) program of the Agumil Palm Oil Corporation using GAP.

The high income he derived from oil palm enabled him to not only put food on his family’s table but also to support his five remaining children through advanced college degrees. In addition, he was able to create jobs and provide a source of livelihood for his neighbors,many of whomalso planted oil palm under the PNTC program of LGU North Cotabato.

His barangay, once the haven of rebels, kidnappers, and other lawless elements, has become a place of prosperity. When the Agumil Palm Oil Corporation discontinued the promotional PNPLprogram, the LGU of the province of Cotabato continued it, making it more poor farmer-friendly using the PNTC scheme. This resulted in a high rate of adoption, and the program’s successwas limited only by the funds available to the Cotabato LGU.

Many who heard about the success story of Sagadan and other farmers decided to participate in the PNTC, so over the last three years, more than 4,000 ha was planted to oil palm in Cotabato. Many more farmers are waiting to avail themselves of the program when funds become available. In addition, an oil palm milling plant was constructed in Carmen,Cotabato by a foreign investor to buy and mill the fresh fruit bunches produced by farmers.

Oil Palm: The Tree of Prosperity and Peace

The distribution among small landholders of oil palm seedlings is expected to provide the following benefits:

2. Liberate 3,571 farmers from poverty, under the assumption that each farmer is provided with planting materials good for two ha or 140 plants;

4. Generate approximately R750 million worth of foreign and local investments in the establishment and operation of two additional milling plants;

The cost to the government of planting 1,000,000 seedlings to include the amount needed to purchase the seedlings at Php200 each is a total of R200 million. An amount of R20 million for seedling distribution and training of farmers may be included for a total of Php220 million.

Considering the success story of the Cotabato LGU’s innovative oil palm dispersal program for overcoming poverty, it is recommended that the Philippine government provide funds to expand the program in North Cotabato and also initiate a similar program in five other provinces of Mindanao. Each of the fiveprovinces (this program can cover Maguindanao, Sultan Kudarat, Agusan del Sur, Davao Oriental, Bukidnon, Sarangani, Zamboanga, Sibugay, and Agusan del Norte) will be provided with Php220 million in annual funds to enable smallholders to plant a total of one million oil palm seedlings a year.

This is a budget of approximately Php1.25 billion for the five provinces. A sustained program for ten years will enable the country to plant an additional 350,000 ha to oil palm so that vegetable oil importation will no longer be necessary

This means a total investment on the part of the Philippine government of R12.5 billion over a period of ten years to overcome an annual importation shortfall of Php55.7billion worth of vegetable oil. The program can significantly help in overcoming poverty in the provinces where the oil palm trees will be planted.

Lots of Meat Lost to Smuggling