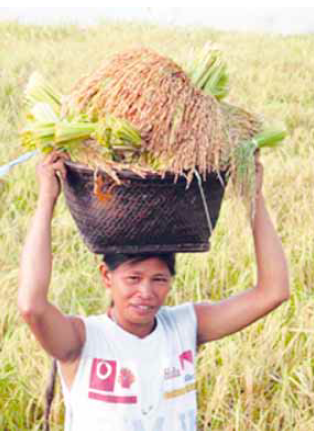 The terraces of the Cordilleras have been declared a World Heritage Site by the United Nations Organization for Education, Science and Culture. These terraces continue to be farmed and maintained by Ifugao farmers who developed them 2,000 years ago.

Of the terraces, the UNESCO says they “…are outstanding because of their altutude (up to 1500 meters) and steep slopes (maximum of 70 degrees). A complex system of dams, sluizes, channels and bamboo pipes keeps whole groups of terraces adequately flooded. (It) consists of four clusters of well-preserved rice terraces: Banaue: Batad and Bangaan; Mayoyao: Mayoyao Central; Klangan: Nagacadan; and Hungduan.”

Yet the farming communities in this massive mountain range continue to face challenges—something which Mary Hensley and Vicky Garcia dreamed of alleviating. The former Peace Corp volunteer and the experienced program planner and community organizer have together built sustainable environments for farmers over the years.

Hensley recalls how, back in 1999, when she read about the collapse of the terraces in the country, “It just broke my heart to think that in my lifetime, what was a very strong and vibrant culture was going to disappear. One of my memories of being a Peace Corp volunteer was, three times a day for two years, I ate the most wonderful rice in the world.“

And so she returned to the Philippines and founded the Cordillera Heirloom Rice Project with Garcia. The project had one major hurdle—in order to make the partnership flourish, they needed to market the rice on a wider scale. Thus a partnership with Sunnywood was born.

“We saw an opportunity to help,” says Romeo Ong, CEO of Sunnywood Superfoods Corp. This rice distributor is a trailblazer in the distribution of branded and healthy whole grain rice from various parts of the country, including the Cordilleras (brands include Harvester’s, Jordan Farms, and Farmboy). It works to raise awareness about local and traditional rice—but it doesn’t stop there. Ong explains, “We wanted to go beyond just business. We saw this opportunity 17 years ago when we worked with farmer-producers of organically grown, unpolished rice looking for a market. We took this challenge and were fortunate enough to increase appreciation for healthy rice products while providing a steady source of income to the producers and cooperatives.”

In its partnership with the Cordillera Heirloom Rice Project, Sunnywood helps to further extend the former’s efforts by helping to market the rice to a wider audience; second, it helps sustain the tradition and heritage of these communities; and third, it helps them flourish as individuals and as a community.

It does this by encouraging traditional practices. Rice varieties from the project are all cultivated using the traditional way of farming passed down through generations. The rice stalks, which are taller than those of the lowland varieties, are all grown organically and hand-picked individually during harvest. Once they are sent to distributors, they are assessed critically before the packaging to ensure their quality.

Because the heirloom rice is bought at higher price margins, rice-planting barangays in the Cordilleras were able to build a daycare center and purchase a generator and a community jeepney. The pan-Cordilleran Rice Terraces Farmers’ Cooperative has so far consolidated a volume of 142 metric tons of native rice for commercial sales, totaling Php8,634,670 in direct payments to farmers. (Photo courtesy of Eighth Wonder,
Inc.)

This appeared without a byline as “Planting Seeds of Hope in the Cordilleras” in Agriculture Monthly’s December 2014 issue.