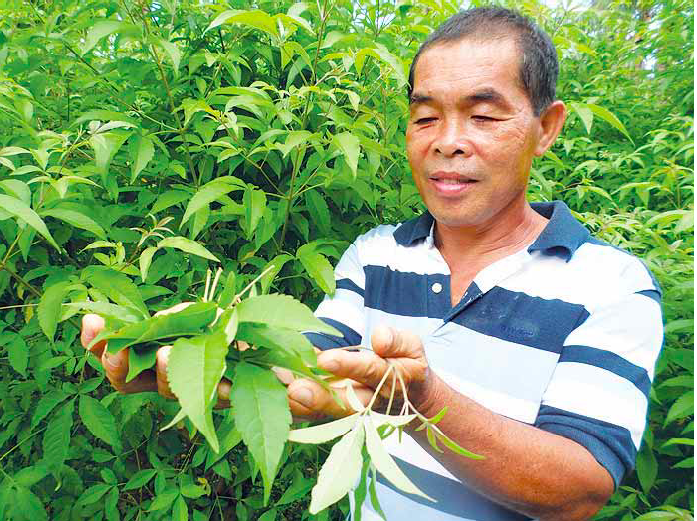 Farming is not all enjoyment, as some hobby farmers will tell you. It can also be exasperating.

Just like the case of a lady from San Pablo City who called us up one day. She was sulking because the bumpern crop of lanzones that she was expecting to harvest a couple of weeks later had been stolen by poachers.

She swore not to plant lanzones again, and asked us what crops she could grow that people will not steal. Well, at that time, we suggested to her to plant hot chilli. Which she did. Although chilli can fetch a high price during certain months of the year, thieves will not usually bother this crop because it takes a lot of time to harvest the tiny fruits. It’s not like lanzones that comes in big bunches.

Now, we have discovered some other money-making crops you can grow that people will not try to steal. During our recent trip to Batangas, we saw the coconut plantation of Arsenio Pecho in Tanauan City. He has partnered with Patrick Roquel and intercropped the coconut trees with Vitex negundo or lagundi.

Patrick has also rented a lanzones plantation where he planted citronella between the trees. The citronella plants are growing very well. The orchard owner is thankful, of course, because he gets the rent and at the same time his trees are also fertilized when Patrick fertilizes his citronella.

Patrick has a processing facility in Tanauan City which manufactures a mosquito repellant using citronella oil. His product which goes by the brand name ‘Citronella Andas’ is claimed to provide eight hours of protection from mosquitoes. It is one product to fight dengue.

Another herbal tree that Patrick is excited about is the ‘tsaang gubat’ or Carmona retusa. Although it is better known for its use in alleviating stomach problems in humans, he is more excited about its use for pets. With pet dogs, for instance, he claims it is good for treating intestinal parasites. He says it is also antispasmodic.

The leaves can be powdered. Just add honey and feed it to the dog. That will rid the pet of intestinal worms. The tsaang gubat leaves can also be boiled and both the liquid and the leaves can be given to the pet dog.

Other plants that thieves will not care to steal include sambong, akapulko, and other medicinal plants. If ever some people will get some, they will not harvest them in volume. Maybe, they will get some for their own immediate needs, which is not much.

Poaching is really rampant, especially in fruit tree plantations. Mango, durian, pummelo and many other fruits are the favorite with thieves. So if you are an orchard owner, make sure to take the necessary measures so you will reap your just reward.

An Agricultural Tour of Mindanao

The Citrus Producers of Aparri, Cagayan