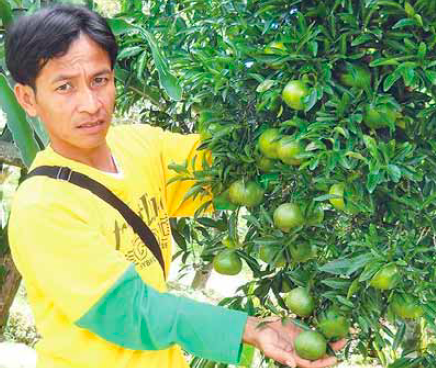 Citrus Growing in Batangas province began to gradually decline in the late 1960s up to the early 1970s so the Department of Agriculture encouraged farmers in other parts of the country to go into citrus production, even offering disease-free planting materials to those interested in doing so.

Among the landowners who gratefully took the opportunity was a successful pediatrician-gentleman farmer from Cagayan Valley in Northern Luzon, Lino Edralin Lim. He pioneered the planting of sweet and Mandarin orange, Chinese pomelo, and calamansi trees on his farm in Barangay Backiling, one of Aparri, Cagayan’s 16 barangays that lie west of the mighty Cagayan River. Aparri has 42 barangays in all but the greater part of the town’s total land area is in the western barrios, where some hilly terrain and wooded patches make them more favorable for farming.

Lim, who was president of the Philippine Medical Association from 1977 to 1978, established his citrus plantings mainly to show people an agricultural activity that they could undertake besides growing rice in their rainfed fields. Growing citus would enable them to make good use of the hilly portions of their land that were mostly idle, and obtain an income from perennial plants that did not need expensive inputs to maintain. In addition, citrus fruits are good for health, especially for children.

In 1980, when his successful medical practice began to keep him in Manila most of the time, Lim entrusted the management of his farm to a lady Fine Arts graduate and townmate who had married a farmer and developed a keen interest in agriculture: Elvira Cortez. Lim’s farm was already known as a commercial source of quality citrus fruits, most of which even reached Metro Manila markets as Twin Rivers Brand oranges. The doctor died in 2013.

“Of the more than 300 hectares that used to comprise Dr. Lim’s property, the farm is now the 156-hectare portion known as his ‘Estate’,” says Cortez. The rest was deeded to his four children and several grandchildren. “The children now want to sell the farm but there have been no takers so far.”

Only about 4,000 citrus trees have survived but others, like mango and coconut, abound in the largely-unkempt farm, according to Cortez. Most of the citrus trees left are of the Mandarin type—Ladu and Szinkom—and these still yield well despite nearly zero maintenance (virtually no fertilization, irrigation, pruning, weeding, etc.).

“I bring the harvested fruits direct to retailers in Tuguegarao City, which has become a fair-sized market for agricultural produce,” says Cortez. “This is not surprising because its being a booming regional center has also made our provincial capital Cagayan Valley’s most populated city.”

The Lim farm may no longer enjoy its old success, but the legacy that its owner left has helped to make many farmers in at least half of Aparri’s western barangays successful citrus producers. Mostly smallholder growers with farms with sizes ranging from less than a hectare to two hectares, they have translated Lim’s enlightened lead into a boon for their town. Mandarin, as the Ladu and Szinkom are popularly known, now sells well in markets throughout the province from late September to December, when consumer demand for citrus fruit
is high because it’s when people commonly suffer from colds and flu.

Among the first to recognize the potential benefits of Lim’s example were rice farmer Villamor Pascua and his wife Saturnina of Backiling’s neighboring barangay Zinarag. Except for the Lim farm, the couple may have the most number of citrus trees in the area at present—over 1,000 Szinkom and Ladu now more than 25 years old, producing good quality fruit that can be credited to organic fertilization—aside from about a hundred Chinese pomelo trees and a bigger number of calamansi trees.

Now retired after 35 years of teaching—mostly at the National Agricultural and Technical School in nearby Barangay Bukig, while her husband concentrated on their rice farm in another part of Zinarag—Mrs. Pascua manages the citrus trees in their 10-hectare hillside home lot. She has also filled the orchard with dragon fruit plants (which have yet to bear fruit), vegetables, white corn, and ornamentals. She calls the spread her “paradise.”

Naturally compassionate and interested in the welfare of other people, she expresses her elation at what citrus growing has done for her townmates. ”Even those who only have several trees in their home lots derive extra income from the fruits that they harvest,” she says. “They also earn from working in the orchards whenever they are needed and from buying fruits wholesale from us growers then retailing those at the markets in Aparri, Camalaniugan, and Lallo. Many of them buy from me because I give them a lower price most of the time.”

She is happy to be able to help other people, especially her neighbors, in earning a living. She hires workers to regularly prune her trees, irrigate and weed the orchard, and prepare compost as organic fertilizer for supplementing the area’s fertile loamy-clay soil with inorganic fertilizer. Composting farm residues is important to her because she adheres to a zero waste regimen in her orchard.

Some of the people that she hires are not ordinary farmhands. For example, at present, her orchard’s head caretaker is a young woman while the foreman is the pastor of a church in the barangay. A young man hoping to qualify as a police trainee works in the orchard.

Her workers apply compost and complete and urea fertilizers in January through the ring method below the edge of each fruiting tree’s canopy. They cover the compost and the two-to-one mixture of 14-14-14 and 60-0-0 with rice hulls that serve as mulch to control weeds before also becoming soil conditioners when these decay. They apply up to three kilos of inorganic fertiizers per tree. In May, they apply a similar 2-to-1 mix of 14-14-14 and muriate of potash, also at the rate of three kilos per tree, before watering the trees.

“The only thing that I’m not so happy about is when yields all around are so good and the abundant harvests make farmgate prices drop,” says Mrs. Pascua. “Whenever that happens, I refuse to sell to traders who bring our Mandarin to Balintawak Market in Metro Manila, or bring the fruits to Tuguegarao myself to sell for as low as 10 pesos per kilo—as if one did not have to spend for transportation and other things.”

After the couple bought a second-hand mid-sized diesel truck for transporting their palay, she would have it loaded during peak harvest time with up to more than a thousand kilograms of Mandarin and send it off with some of her people to Ilocos to sell the harvest there at retail prices.

“Of course my people always sold all the Mandarin fast because we profited more, and I share the profits with them,” she says. “We would not have to do that if marketing our produce were not such a problem whenever harvests are good. If investors put up an orange juice plant here, we would all benefit greatly.” A consolation for her is that her trees continue to be with fruit until December, at which time she says she gets even with the traders because she can dictate her price due to the low supply and the higher demand.

Plant Farm Crops the People will Not Steal