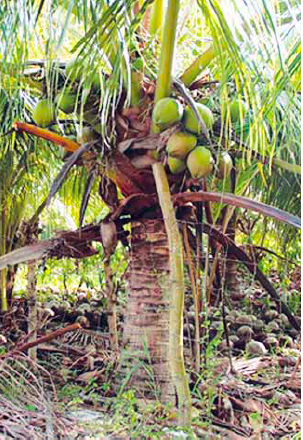 A cooperative in North Cotabato makes headway with coconut sugar.

Pikit, North Cotabato—With close to a million coconut trees planted in this town, a majority of its residents rely heavily on the crop. Yet while there are many products that can be processed from coconut, Fernando Bingtan, president of the Samahang Magniniyog ng Pikit Cooperative (SMPC), says that farmers here confine themselves to copra and whole nut production, which gives them few opportunities to increase their incomes. He adds that the brisk lending trade places them at risk of drained resources should they rely solely upon it.

SMPC manager Rey John Ceriales shares that coconut farmers usually live on the poverty line. He points out that Pikit, despite being the leading coconut producer in the province, also has
the most number of conditional cash transfer beneficiaries.

While attending the Mindanao-wide Coconut Summit in Davao Oriental in 2012, Ceriales and other SMPC officials learned about the potential of coco sugar as a viable value-adding
activity. This prompted them to plan for and propose a coco sugar production project to the Department of Agriculture’s (DA) Mindanao Rural Development Program (MRDP).

Because SMPC had good standing as a co-op, the DA-MRDP approved their proposal and provided them with R1 million to jumpstart their project.

The bulk of the funds went to the construction of a processing facility and the purchase of
equipment. Ceriales says they were eyeing the export market, so they ensured that the plant
was compliant with Food and Drug Administration standards.

The co-op is currently working towards FDA certification, and initial tests showed promising
results as their product passed the microbiology test, “…which speaks so much of the product’s
safety,” he adds.

Currently, the co-op produces 30-40 kilos per day but their plant is capable of producing as much as 20 tons per day. “Once our prospective market is ready, we will maximize its capacity,” says Jennifer Daylusan, the coop’s treasurer.

Imelda Alegado, one of the processors, shows the coco sugar which they plan to market in volume abroad

The promotion of their products is being intensified through business matching activities. “Whenever our officials attend meetings or seminars, they always bring samples of our coco
sugar,” Daylusan adds.

The quality of SMPC’s coco sugar impressed a Davao-based businessman who signified his intention to order in volume once the FDA certification is approved. “He has a business in
Israel and he committed to help our product enter the Israeli market, particularly in getting halal and kosher certification,” Ceriales shares.

As it anticipates an increased need for raw materials once the marketing arrangement takes effect, the co-op has accredited nursery operators and incorporated the propagation of dwarf
coconut varieties in their operations.

“We have the Green Dwarf coconut variety, which we also call the ‘Pikit Dwarf’. This is highly suitable for sap production as it will not require tappers to climb tall trees to gather the sap,” Ceriales explains. Tappers can maintain at least 60 trees as a source of coconut sap.

Although the coco sugar production operations are still in the initial stages, its impact on the community can already be felt. Since the start of the project, it has employed at least 18
women to do the processing and packaging of their product. Ceriales says coco sugar production offers a better income to mananguetes, or tappers. One tapper in their co-op now earns Php4,000 a week for a total of Php16,000 a month from supplying coco sap as a raw material.

While much still needs to be done for the co-op to fully maximize its coco sugar production, more assistance is coming from other agencies. These include the Department of Trade and Industry and the Philippine Coconut Authority, which will help SMPC upgrade their facilities and fast-track their FDA certification and export application.

Expressing confidence in their product, Ceriales declares, “The assistance from MRDP pushed us to pursue our dream of providing better opportunities to our small coconut farmers.”

Oyster Mushroom: A Treasure from Waste in Laguna