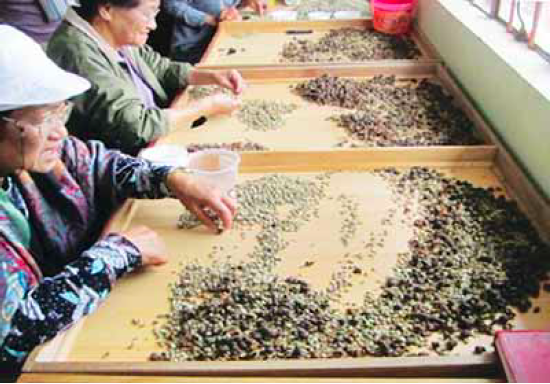 The processes and certainly the technologies used in producing green coffee beans are very much related to their harvesting method.

In the 1970s, the Philippines ranked among the top 10 producers and exporters of coffee. However, problems like the unstable world market price for coffee beans, quota restrictions, and the high cost of production contributed to the inability to sustain the domestic coffee industry, reducing it to a backyard type of production. Thus, the Philippines has to import 21,430 MT or metric tons (average for 2008-2012), accounting for 46% of its yearly domestic supply (BAS, 2012); this is valued at Php2.5 billion/year.

Today, there is a renewed interest in developing the coffee industry, primarily to make the country self-sufficient in coffee, increase income opportunities for producers and entrepreneurs, and increase the export rates of specialty coffee (Maghirang, 2006 as cited by Idago and Dela Cruz, 2011).

Four major types of coffee are produced in the Philippines, namely, Robusta, Arabica, Excelsa, and Liberica. These comprise 74, 16, 8, and 2 percent, respectively, all locally
produced coffee. Robusta is the major type of coffee utilized in the production of instant coffee. Arabica, Excelsa, and Liberica are often used to blend with other coffee types to produce flavors unique to individual coffee makers.

While the country imports coffee, it also exports specialty coffee, particularly Arabica and Liberica. The Department of Agriculture reported that organic Liberica and Arabica coffees
are becoming popular, and that several companies are promoting and marketing them. Moreover, several coffee growerprocessors are producing gourmet pure Arabica coffee.

The processes and certainly the technologies used in producing green beans are very much related to the harvesting method.

For example, to practice the wet method, the priming method of harvesting should be adopted; in it, the ripe berries are harvested and depulped, wet parchment-fermented for several hours, washed, then dried to produce the dry parchment beans.

Arabica coffee growers in the Cordillera Administrative Region (CAR) generally depulp Arabica beans using antiquated practices. They pound the beans using mortars and pestles, step on ripe berries placed in sacks, and use rough stones and wooden pulpers for small harvest quantities. Depulping using a mortar and pestle is practiced by 62% of the coffee growers.

After depulping, the pulp is separated manually from the wet parchment, which then placed in containers like pails or plastic bags and allowed to ferment for at least 24 hours. From the point of view of the farmers, fermentation is completed when the mucilage can easily be removed by washing it off. Sun-drying is done using underlays like ‘bilao’ (round trays woven from bamboo wood), wood, or sacks. Hulling is generally done using a mortar and pestle while cleaning or removing the hull from the green beans is done by winnowing.

The dry method is adopted for berries harvested by means of stripping, in which both the ripe and unripe berries are harvested at the same time. This is commonly used where rainfall is scarce and long periods of sunshine are available. Conversely, it is not acceptable in areas where humidity is high because prolonged drying favors the development of microorganisms that could produce harmful toxins.

Relatively, the production per farmer is higher with Robusta than with Arabica. This is partly the reason for the dry process practiced with Robusta because farmers handle relatively larger volumes of coffee. The dry process facilitates the production of green beans because it is simpler, involving only two major operations—drying and hulling. The whole berries are dried for several days or weeks before being hulled using a steel huller. It is the longer period of drying and the use of antiquated machines that cause the deterioration in the quality of green beans.

The semi-wet process is similar to the dry method but with the additional process of cracking the berries using wooden berry splitters to facilitate drying. Fermentation is omitted. The few adopters of this technology recognize the importance of removing the pulp to facilitate drying.

Benguet is considered the Arabica capital of the Philippines. Arabica coffee is productively produced in the highlands with an elevation of more than 700 meters above sea level. One of the identified problems in Arabica production is the poor quality of coffee beans resulting from inappropriate pulping and hulling operations (Benguet Provincial Agriculture Office, 2008).

This was validated by the study conducted by Idago and Dela Cruz (2011), which reported that the traditional pulping and hulling of coffee beans in the Cordillera produced Arabica green beans with a Grade 4 classification. This class of beans has 24 to 86 defects in a 300 gram sample and is classified as “Below Standard Coffee Grade” based on the Specialty Coffee
Association of America (SCAA) Green Coffee Classification.

Specifically, the present practice of pulping and hulling result in a high percentage of broken beans (14.23), broken down thus: 6.17% due to pulping and 8.06% due to hulling,
of the dry bean weight (Idago & Dela Cruz, 2011). While the physical quality of green beans produced by farmers in Benguet is generally poor in appearance, its intrinsic quality is
high because of the fact that it is organically grown. The problems identified by the major coffee stakeholders producing and/or utilizing Robusta green beans are similar.

While the coffee producers mentioned slow and prolonged periods of drying as their main problem, the buyers (local processors and Nestle Philippines, Inc.) also identified the
following as problems: the limited supply, how the green beans of Robusta had poor quality with high moisture content, broken and black beans, and an acidic and earthy flavor (Idago et al., 2012). With improved postharvest practices, particularly in facilitating the drying operations and hulling, the quality of Robusta green beans could be substantially improved.

The DA included coffee among the priority crops to be developed in the next few years. In the national coffee roadmap, the provision of postharvest and processing facilities in selected
production clusters and the introduction and/or improvement of value-adding activities are among the priority concerns that will be addressed. In support of the DA’s goal, PHilMech sets
the following developmental objectives: (a) develop postharvest and mechanization technologies and systems appropriate to the requirements of producing Arabica and Robusta green beans; (b) reduce postharvest losses; (c) increase productivity of coffee farmers through loss and cost reduction and improvement in quality of green beans; and (d) maximize the benefit from improved quality of green beans by enhancing value-adding operations at the producers’ level.

The Socioeconomics and Policy Research Division of PHilMech generated postharvest systems that could substantially improve the quality of Arabica and Robusta green beans. The improved
postharvest systems for the processing of Arabica green beans significantly reduced the amount of broken beans resulting from pulping and hulling, from the combined percentage of
broken beans (14.23%) with the use of the traditional method to 2.73% with the use of the technology interventions developed by PHilMech. Moreover, the combined cost of pulping and
hulling was reduced by R6.91/kilogram of fresh berries by using the improved pulping and hulling technologies.

For Arabica Green Beans: The production of Arabica green beans follows the wet process. The priming method for harvesting and the wet process are generally practiced in producing Arabica green beans. Since priming is practiced, a small volume of ripe berries is harvested and depulped per batch (10-15 kg fresh berries/harvest). Harvesting is done twice a week, mostly by women.

To reduce losses, particularly broken green beans, two major improvements are recommended. These are the: (a) introduction of a manually-operated rubber-bib pulper for ripe berries, and (b) the use of a mechanical rubber-roll huller to dehull dry parchment. Since drying is done by growers in small amounts, it is still manageable and poses no immediate problem with the quality of beans. However, in areas where afternoon drizzles are common, an all-weather dryer made up of 4-6 micrometer (mil) thick UV-treated plastic sheets as cover is recommended to facilitate drying. If green beans are traded in relatively bigger volumes, cleaning and sorting of defective beans is greatly facilitated by a sorting table.

The semi-wet or pulped natural method of processing Robusta and other types of coffee is recommended to facilitate drying and prevent deterioration of quality that could happen during
lengthy drying periods. The intervention in this process is the introduction of pulping and hulling machines. Using the semi-wet process, the stripped mature and immature berries are de-pulped using a steel-bib coffee pulper, which can be motor-driven or manually operated. Cracked or split berries are dried using an all-weather dryer then hulled using a steel huller or a rubber-roll huller. Steel hullers are generally available in areas with Robusta coffee. These machines have long been used for coffee processing and are also often used in rice and corn milling. With proper adjustment, steel hullers produce low rates of broken beans and are at par with rubber-roll hullers.

In collaboration with the Agricultural Training Institute and the Training Management and Technology Division of PHilMech, three island-wide training sessions for regional and provincial policy makers and extension workers in coffee were conducted from October to November 2012. The aim was to introduce and facilitate the inclusion of the improved technologies in the regional and provincial coffee programs of the concerned DA regional field units (RFUs).

As of March 2013, 82 units of rubber-bib coffee pulpers have been procured and distributed thus: Benguet, 66 units; Mountain Province, 7 units; other provinces, 9 units. The procurement
of 66 units of coffee pulpers in Benguet was done under the Shared Service Facility Program of the Department of Trade and Industry, Benguet, while those for Mountain Province were
under the support program of the local government unit of Sagada. Private individuals engaged in coffee production and processing also procured other units.