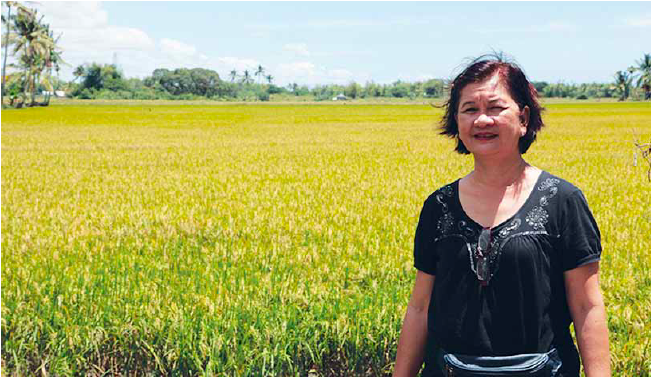 A mother, farmer, and technology adopter: those are the roles Zenaida “Zeny” F. Sonalan, 62, of Sta. Maria, Iloilo, plays as she continues to hurdle life’s challenges after surviving the pain of losing her husband to a debilitating disease.

By Milagros B. Gonzales

Before she became a farmer, Sonalan was a pharmacist. But she gave it up to support her husband in farming and to care for their children. Married to the late Atty. Rey Sonalan who
was then the Iloilo City legal officer, they had two children; both are now professionals.

She says what she uses in the face of necessity is ‘woman power’. Once, she needed money for the debut of her daughter, but the payment for their seeds was slow in coming despite several follow-ups. That’s when Sonalan approached the then-Regional Director Oblena of the Department of Agriculture (DA). The check was released for the whole seed grower’s association two days before her daughter’s debut.

Sonalan also lined up at the Philippine Charity Sweepstakes Office (PCSO) to seek help
with the expenses for her husband’s dialysis. Already buried in debt, she needed all the assistance she could get for the treatment of her husband’s kidney disease, and the PCSO helped cover what the assistance from their kind relatives could no longer pay for. But she always tried to hit two birds with one stone.

“When my husband was still alive and I needed to go to the PCSO, I made it a point to buy
seeds from PhilRice in Munoz, Nueva Ecija,” Sonalan shares.

She’s been a seed grower for over 20 years, growing both registered and certified seeds which she sells at Php1,600/bag and Php1,200/ bag, respectively. Her market includes private individuals, the DA regional field office (RFU), and the National Food Authority.

These days, she is part of the 38-member Iloilo Integrated Seed Grower’s Multi-Purpose Cooperative, and is one of its four female members. Sonalan has a six-hectare rice farm and
supervises a total of 22 hectares of extension farms owned by her relatives and those of her late husband. She says that the advantages of being part of a seed grower cooperative include a higher income, access to farm equipment and machinery, and market outlets for her produce.

According to Sonalan, seeds sell better than ordinary paddy (unmilled rice). “Every cropping season, we provide 20,000 bags of paddy to NFA…If our paddy passes the NFA standards for seeds, we have the Farmer’s Option to Buy Back (FOTBB) the seeds we sold.”

Rice mechanization is not new to Sonalan, who already owns land preparation equipment and
a thresher, which she uses on her farm. She also uses the mechanical dryer of her cooperative. What is new to her are the rice machines like the transplanter and the combine harvester. She sees their potential, because the lack of laborers to plant rice seedlings at the peak of rice production has been a problem for her, forcing her to hire them from other municipalities like Miag-ao and Calibog.

These rice machines help her address the labor problem, and are faster than humans. She needs
to hire 30 laborers per hectare during harvest, but with the combine harvester, she only needs
two to three people, and she can harvest two hectares lands.

In addition to being a technology adopter, Sonalan is also an innovator. She has created a
seedling rack made of bamboo for their 750 transplanter trays to save on space and keep the seedlings in order prior to transplanting.

Sonalan says that with rice machines like the combine harvester, the lack of labor is no longer a problem for seed growers like her.

Sonalan calls for the improvement of the after-sales service of the machine manufacturers. “When a machine needs repair, it must be fixed fast so that there will be no delays in farm work,” Sonalan says, expressing her disappointment with the current service speed. She also
pleads for faster payments for the seeds procured by the DA. Usually, she says, it takes six months.

Nonetheless, she has high hopes for rice machinery, and how it can support her in the many roles she undertakes in her life.

This D.A. R&D’s Station’s Main Focus is Rice and Citrus