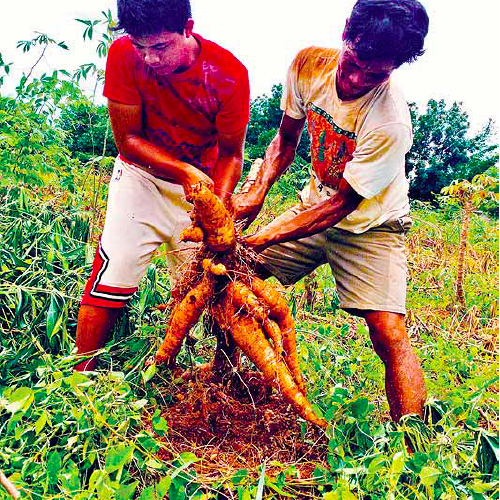 This Farmer Finds Hope in a Cassava Digger

A cassava farmer relates how technology has made his work easier and his profits grow.

Alfredo Pascua has no problem with his farming practices, or with his crop’s requirements,
or even with cassava marketing. His major difficulty lies in the laborious way the tubers are
harvested. Workers often struggle to pull out the tubers from the ground, and often have to work under the relentless heat of the sun, which slowly saps their strength as the day wears on.

The cassava farm owner from Cordon, Isabela, estimates that harvesting the tubers accounts for about 65 to 70 percent of production and post-production costs. Each laborer earns PhP250 a day, and on Pascua’s farm, the total manpower requirement is 30 laborers a day per hectare. Thus his daily budget for labor is PhP7,500.

In addition, manual uprooting means more time passes before the produce finally reaches the market, depending on the efficiency of the workers, weather conditions, and the financial
capacity of the farm owner. Newly harvested fresh tubers, when immediately delivered to the market, weigh more and fetch better prices. If workerstake too long to reach their quotas, the earlier harvest will have to wait until the bulk requirement is completed. With this delay, the chance of a bigger income is lost.

And so when the Abrasa Multi-Purpose Cooperative—which operates in Diffun, Quirino and to which Pascua belongs—introduced the Philippine Center for Postharvest Development and Mechanization or PHilMech’scassava digger in a pilot testing, Pascua saw its potential for having an immediate impact on his traditional farming practices.

He estimates that harvesting costs will be cut by at least 50 percent. Given that harvest costs are a cassava farmer’s biggest expenditure, he is eagerly awaiting the availability of the machine. He also foresees improved harvest efficiency; after all, he points out, machines do not get tired.

PHilMech’s cassava digger was developed to reduce the drudgery of manual digging or uprooting of cassava tubers. It is attached to a 90-115 horsepower tractor and digs up soil to a depth of 30 centimeters. The length of time it takes to harvest cassava will be minimized; based on the tests done using the digger, the machine has the capacity to harvest 1.8 to 3 hectares
per day. Moreover, manpower costs will be minimized since a tractor can be driven by one person.

Pascua definitely has plans for using the technology in the future, and says that he would love to see it tested on his farm so that he can learn firsthand what adjustments will be needed for its use, in addition to adjusting the spacing between plants to allow for the machine to efficiently harvest the tubers.

Pascua learned from 15 years of farming that cassava is not a sensitive crop, requiringlittle attention and few farm inputs to help it grow. In fact, once its stalk grows over 6 inches in
height, a farmer can be assured that it will continuously grow, rain or shine, even with minimal supervision. The 56 year-old farmer adds that one can merely plant cassava stalks in about eight inches of ground, and they will grow.

On his 10-hectare cassava farm, Pascua plants edible varieties like Golden Yellow and Lakan as well as the non-edible but high-yielding industrial variety called KU50. He uses the vertical method of cassava planting (also known as the ‘tusok’ method or literally stabbing stalks into the ground) which he claims is more effective because the stalks develop faster and grow taller—in one week, they can grow from 6-8 inches—and produce bigger tubers than when the horizontal or ‘tubog/lubog’ method is used.

He also plows the land around the plant to remove weeds and allow oxygen to penetrate through the soil for the easier development of tubers. Pascua does this only once, 45 to 60 days after
planting. He also prunes the plants to minimize stalk development along the stem so that all nutrients will flow directly to the tubers and not to the stalks. However, if the stalks are to be marketed to those wishing to grow the crop, multiple stalks are allowed to grow.

Pascua also applies fertilizers immediately before weeds begin to grow so that tubers will grow faster than the grass. Cassava farmers wait from 8 to 12 months before the cassava tubers can be harvested. But this isn’t idle time for farmers like Pascua, because he also takes care of his rice and corn fields in Isabela. He uses his profit from these crops as capital for his expenses in cassava harvesting.

During harvest, Pascua sets aside 10 percent of his total harvest for seedling purposes; this is a practice he learned from the seminars he attended. The stalks thus set apart always grow, based on his experience.

A fluctuating market price for cassava in Isabela is no longer a problem for a coop member like Pascua. The Abrasa Multi-Purpose Cooperativeprovides farmers with a fixed price for their fresh or granulated and dried cassava, buying dried tubers from farmers for PhP9.90 per kilo and fresh tubers for PhP3.30 per kilo.

The coop has direct contact with the San Miguel Corporation, which requires bulk orders of cassava for their feed processing needs. This creates more opportunities for farmers to have a sure market for their produce.

In addition, enterprising farmers like Pascua derive additional income from selling cassava stalks to fellow farmers as seedlings for the next planting season.