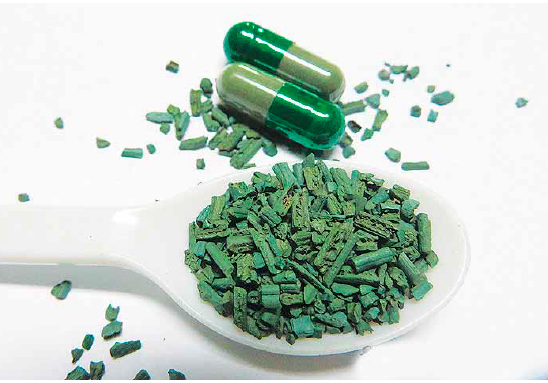 Two Spirulina capsules and a teaspoonful of granules.

Did you know that locally produced Spirulina products beat their imported counterparts from other countries in terms of protein content?

Spirulina is the microalgae that is dubbed as the “most complete food in the world,” and is claimed to address a wide variety of human ailments.

Aside from its high protein content, Spirulina is also rich in three vital nutrients: beta carotene, Vitamin B12, and linolenic acid, which are “all essential in protecting and strengthening the immune system.”

An Australian company claims in its website that their Spirulina products have a protein content of 70.2 percent, which they say is the highest in the world. However, the Spirulina locally produced by a retired engineer has been analyzed to contain 72 percent protein by Sentrotek, a laboratory accredited by the Food and Drug Administration (FDA) of the Philippines.

Pol Puente (center) showing the tank where the water and organic nutrients are mixed with water before the mixture is placed in the growing pond.

The local Spirulina products (granules and capsules) are produced by Aztec Foodgrowers Corporation, based in Cainta, Rizal. The company’s founder is 61-year-old civil engineer Napoleon ‘Pol’ Puente. He used to construct gasoline stations for the major petroleum companies but gave up his construction business in 2002 to take it easy, so to speak, after making more than enough to maintain a comfortable life.

Instead of being addressed as engineer, he would rather be called ‘Farmer Pol’ today. He confesses that constructing facilities for the big companies pays very well but is also very stressful.

For a few years after his early retirement, he used to spend most of his time in the golf course. But then, he also wanted something else that he would enjoy doing which was at the same time fulfilling. In 2008, he decided to farm Spirulina, which packs a lot of protein.

A nephew who is the marketing manager of a multinational company in Colombia introduced to him the many health benefits of Spirulina. Pol liked the invigorating effects of the microalgae in granule and capsule forms. And since no one was producing the same in the Philippines, he would buy imported brands from Thailand, Australia, and the United States.

View of the growing ponds inside the roofed area.

Somehow, he felt that some of the imported brands did not measure up to the quality of the Spirulina that his nephew supplied him from South America. So he did his own research. He visited the websites of producers in different countries, and also did his own study on how to produce the blue-green algae. In 2008, he decided to grow his own Spirulina if for home consumption only.

Of course, he was not satisfied if he only grew Spirulina for home consumption. He also wanted to share the wellness benefits with his countrymen. So in March 2010, he and his family put up the Aztec Foodgrowers Corporation, which was duly licensed by the FDA to operate as a Spirulina producer.

Although Aztec Foodgrowers is small compared to the big players abroad, being small in the beginning did not worry Pol. He started his production in a small way but with superior facilities to produce pure Spirulina under a system that he conceptualized as an engineer.

Spirulina algae attached to a fine-mesh net for testing
before harvest.

As of now, he grows his Spirulina in three concrete ponds roofed with imported UV-resistant plastic. The structure is very durable as it is made of steel and concrete. The place is spic and span. Visitors have to wear gowns and step on a disinfectant mat before entering.

He observes that the big companies abroad usually produce their Spirulina in open ponds, and they harvest everything in the pond, which may include some impurities. Pol points out that Spirulina is also affected by too much rain and very high temperatures. These are the reasons why he opted to grow his Spirulina under a roof, also devising a harvesting system that will only collect pure Spirulina growth on the surface of the growing pond.

Right now, he harvests from each pond every four days. The collected algae is dried in the sun in an enclosed transparent dryer. In a few hours, the Spirulina is dried then converted into granules, or powdered to make capsules. The granule takes effect immediately after it is taken orally. It can perk up a stressed individual right away. Those suffering from some disorder, however, may need to take more than a teaspoonful a day. The Spirulina capsule may not take effect immediately but is more convenient to take, especially for those who are working in the office.

So far Aztec Foodgrowers can produce enough granules and capsules for about 1,200 regular consumers every month. Pol says that they are just producing what they can sell to the local market. If more people discover the beneficial effects of Spirulina, he believes he has now the expertise to produce bigger volumes. It is quite easy for him to expand although that could entail a big amount of capital because of the first class production facilities that he is employing.

By the way, Spirulina is not only for human consumption to address a wide variety of health problems. It is also used in livestock feeds, and in aquaculture.