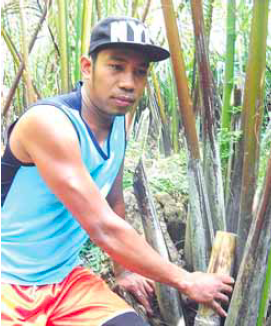 Nipa sap gatherer Jake Arinabo visits one of his taps.

Nipa (Nypa fruticans) palms are abundant in the estuarine tidal floodplains of rivers in the countries of Southeast Asia but are also widespread in India, Bangladesh, and Sri Lanka, Japan’s Ryukyu Archipelago, in the Caroline and Solomon Islands of the Pacific, in tropical Australia and Papua New Guinea, and in West Africa.

Nipa differs from most palms in being trunkless and lacking an upright stem, with its fronds emerging from the mud and developing inflorescences at a height of one meter from its base. Nipa swamp soils are muddy and rich in alluvial silt, clay, and humus, and are in highly complex micro-ecosystems (which are sometimes regarded as part of mangrove ecosystems). That’s why nipa is also called the “mangrove palm”—because it thrives well in that environment.

For centuries the gregarious (growing close to each other) brackish water-thriving palms have been a valued resource in countries’ coastal areas. They are an excellent source of sugarrich sap for making vinegar and wine, and shingles for thatched roofs. Mud crab catchers also make the leaves into baskets for holding their catch when bringing these to market. In some countries, farmers feed the sap to poultry and livestock.

Throughout the Philippines where there are brackish water rivers and muddy banks, nipa palms proliferate untended and self-propagating, an economically-important resource to coastal communities.

Perhaps one of the vastest nipa areas in the country is where the estuaries of three rivers—the mighty Cagayan from its western bank, the Abulug, and the Pamplona in the northwestern end of Cagayan Province—form an extensive network of streams winding among vast nipa forests. Of these three estuaries, that of the Pamplona River in the town bearing its name has the vastest nipa area.

The distiller has a recirculating water cooling system.

Pamplona Municipality’s Barangay Cabaggan is the most accessible and the leading area as far as livelihood from nipa is concerned. Of all the men of the barrio’s 145 households, 95 percent earn a living as gatherers of the sap that they make into wine and vinegar, employing methods handed down generation through generation by their forebears. Most of them gather sap from palms they don’t own, working for owners of the plantations.

The barangay is where researchers of the Mariano Marcos State University (MMSU) in Batac, Ilocos Norte and the Philippine Rice Research Institute (PhilRice) in Muñoz City, Nueva Ecija decided to set up the country’s first facility for producing bioethanol from nipa sap. The distillery had its inauguration and test run in early October with the Pamplona municipal government as the host entity.

PhilRice is involved because its current executive director—Dr. Eufemio Rasco, a leading reseacher on nipa—first urged the conduct of studies on producing ethanol from nipa sap
in his 2011 book, “Biology of Nipa Palm… and its Potential for Alcohol Production.” He believes that the availability of a cheaper fuel for the hand tractors of small farmers will greatly impact the supply and price of rice, which have been traditionally affected by the cost of fuel for machinery.

He observed the connection between international energy costs and rice supply in 2007 and 2008, when increasing oil prices drove the price of rice to its highest levels. Dr. Rasco says that the biofuel will increase Filipino farmers’ competitiveness, as it comes from a renewable resource. A cheaper alternative to gasoline as fuel will also benefit small municipal fishermen who use motorized bancas.

Recent research on nipa have focused on its potential as a biofuel crop because it has several advantages over other biofuel-alcohol crops like sugarcane, coconut, corn, cassava, and sweet sorghum. Sugar palms like nipa are very efficient converters of solar energy to sugar.

Nipa sap has 10 to 20% sugar content; the palm doesn’t compete with other crops for agricultural land; and there’s no bagasse disposal problem. It also has the highest ethanol yield at as much as 26,000 liters per hectare per year, four times more productive than sugarcane—today’s main source of alcohol—which can yield only 6,700 liters per hectare. Unlike with sugarcane, cassava, and sweet sorghum, ethanol production from nipa is year-round.

Ethanol production systems in or near nipa plantations also make possible the decentralization of biofuel processing to the rural areas and remote islands of the country, eliminating the need to transport feedstock or raw materials over long distances to plants in large urban centers.

Learning about the need to develop a technology for ethanol production from nipa from a Japan International Cooperation Agency 2013 study about the huge potential of bio-ethanol production in integrating the country’s need for alternative energy and food sufficiency, as well as from a symposium, researchers at the MMSU formed a project study team headed by Dr. Shirley Agrupis, with Dr. Fiorello Abenes, a US Senior Fulbright fellow, as project consultant.

It focused on a bioethanol technology that can be adopted at the barangay level. The team’s efforts led to the fabrication by MMSU engineers of a prototype electricity-powered reflux distiller for ethanol from nipa sap at the University in April 2014.

After a survey of suitable sites for the first facility, the MMSU and PhilRice researchers decided on Cabaggan in Pamplona. They convinced barangay chairperson Crisanta Leaño and the municipal officials to let them set the facility up in Leaño’s 20-hectare nipa plantation, then asked her son Christian, who was managing the family’s nipa wine-making operations, to train at the MMSU with the prototype distilling system while engineers built the unit to be installed at Cabaggan.

After the launch and ceremonial run officiated by Dr. Rasco and MMSU, PhilRice, and Pamplona officials, the researchers found that the reflux distiller could produce seven to nine liters of 95 to 96 percent bioethanol from every 100 liters of nipa sap in a fourto-five-hour operation. The distiller’s full capacity is 200 liters of sap.

Engineers Alexis Blonio and Eden Gagelonia of PhilRice used the ethanol on the retrofitted water pump in a demonstration. On another occasion, according to the Leaños, ethanol produced at the facility ran a biofuel test vehicle of the Department of Science and Technology.

Nipa sap gatherer Jake Arinabo visits one of his taps.

Dr. Rasco envisions the establishment of ethanol distillers in 100,000 nipa areas throughout the country to considerably ease the country’s energy problems. At Pamplona, the MMSU has asked the Leaños to produce 100 liters of ethanol by January 2015; the researchers will test-market these with an oil company.

“Even with just one distiller, we can produce what they need,” says Leaño, who retired in 2013 after teaching for 33 years. “But we eagerly await the delivery of 10 more distilling units within the first quarter of 2015 as they assured us. With ethanol as a competing product, our wine will fetch higher prices.”

The Leaños bought their 20-hectare nipa farm in 1985 with their savings. A number of sap gatherers work for them. The family’s main income for years has been from sales of nipa wine. Their five children all obtained college degrees thanks to the income from nipa wine, says Leaño. “It has a steady market and it’s always profitable to sell because we can wait for its price to be high before selling. Our gatherers also earn much because they’re entitled to half of all the vinegar and wine produced from the sap that they collect.”

The nipa wine makers in Cabaggan distill sap collected by the gatherers from the cut stalks of semi-mature fruit heads, tapping the flower clusters before these bloom to yield a sweet, edible sap collected in bamboo tubes that can carry as much as five liters of the liquid.

Leaño points at the distilling unit for nipa wine at their farm.

The distillation set-up uses a condenser cooled by continuously flowing water. To improve the quality of the toddy, reduce vapor and heat losses during distillation, improve alcohol recovery, and develop a set of good manufacturing practices for wine production, the MMSU research team introduced modifications to the traditional system. The improvements resulted in the production of nipa wine with a 60% alcohol content at a 28% yield conversion rate compared to the previous 40% alcohol content obtained at a 22% to 24% yield conversion rate.

There are nipa palms that are in their reproductive stage any time of the year, although the peak time when a higher proportion of the plants’ flowers fall in May and June. Collecting sap may not be as simple as it seems.

“Before sap will flow, we do something to the palms that our elders taught us to do,” says Leaño. That, she explains, is what they call ‘massaging’ or kicking, with the soles of their feet, the stout stem where the flower stalks are, as if to coax the stems to produce sap. “We kick at a palm every 10 days for a total of 50 to 75 times. When we see that rats—detecting the sugar building up in the stalks—have been gnawing at them at night, we cut them for the sap to flow.”

The sap that flows from the first cut is the best and that’s what the wine makers use. When the flow stops, the gatherers slice off thin portions of the stalk with a razor-sharp tool but the flow that resumes is of sap that can be used only as vinegar. Then, when that second flow stops, more thin slices off the stalk ends result in more good sap for wine-making for a period of 30 to 45 days.

Gatherers do the cutting and slicing off of the stalk ends in the morning. In the afternoon, they return for further slicing of the stalks and harvesting the collected sap.