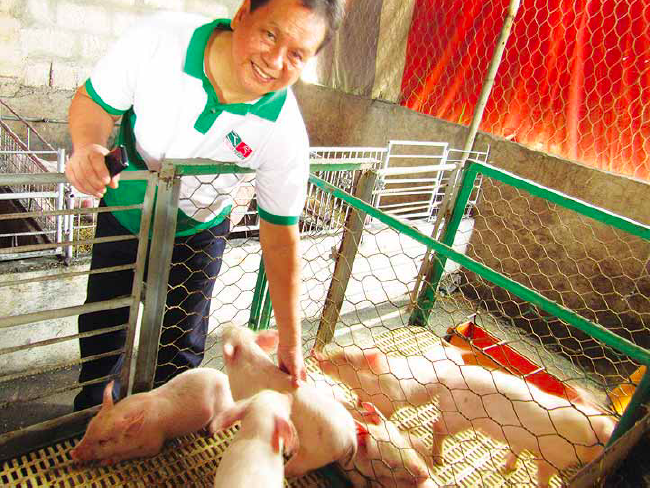 Backyard hog raisers have always been the disadvantaged sector of the livestock and poultry industry for a number of reasons.

First, most of the backyard raisers don’t have enough capital. So they can’t buy the more expensive breeds to raise. They can’t put up a decent hog house because cement is very expensive. They can’t afford the quality feeds that are available. Then the viajeros offer low prices for their fattened pigs, claiming their meat is not as lean as those grown in commercial farms.

With the implementation of Asean Integration where free flow of commodities in the
region is virtually unrestricted, it is imperative that the backyard raisers become more competitive. Otherwise the backyard hog industry will eventually die because it will not be profitable to raise pigs the backyard way.

Backyard hog production, however, is not exactly hopeless. It could be profitable with the adoption of creative strategies. Just like the program being implemented among small
hog raisers by a cooperative in Bulacan – the Kooperatibang Pangkabuhayan ng Sta. Maria. The co-op is headed by Gil SP Garcia who is also the chairman and major stockholder of Agrichexers Corporation which manufactures high quality feeds for hogs and poultry.

The co-op has a contract growing scheme for backyard hog farmers that enables them to raise pigs even if they don’t have a big capital. This has been going on since 2008 with just two contract growers for a start. Today, there are 25 of them and many more are in the process of applying. Eladio Umban who is in charge of overseeing the project says that every batch has been profitable for the farmers.

Garcia posing with the truck of a client hauling feeds.

This is how the scheme works. The cooperative, which was put up mostly by the officials and employees of the feed mill, provides the piglets, the feeds from start to finish, the medicines and vitamins. The co-op also provides technical advice and buys all the fattened pigs.

When the fattened pigs are sold, the costs of piglets, feeds and medicines are deducted and the contract grower gets 60 percent of the remainder while the co-op gets 40 percent.

The contract grower takes care of the pigs and provides the hog house, usually with specifications by the co-op. Foremost of the requirements for it is the use of carbonized and fresh rice hull as flooring instead of the usual concrete.

The use of rice hull as flooring has been popularized by natural farming practitioners and has several advantages. Under this system, the pigpen does not have to be cleaned every day as is the case with the conventional concrete-floored hog house. The pigs are not bathed either. Thus, there is less work in the piggery and water is also saved.

For instance, Teodorico Ramos of Brgy. San Jose Patag is currently taking care of about 30 fatteners of different sizes. When he was not yet a contract grower and his pens had a concrete floor, he had to wash the pens every day, consuming about 12 barrels of water. Today, because his hog house has rice hull flooring, he only uses two drums of water a day for the pigs to drink. He does not only save water, he saves on electricity because he does not have to pump water for long periods.

Pollution is also minimized with the use of rice hull as flooring. The usual foul odor in the piggery is virtually eliminated. Before, when Teodorico and his wife were raising their pigs on concrete floors, the neighbors complained of the foul smell that resulted from the daily washing of the pigpen and bathing of the pigs. Now, the neighbors are nolonger complaining.

With the new housing, Teodorico does not have to spend much time attending to the pigs. All he does is to feed them three times a day with the ration provided by the co-op and some green forage he collects from his farm. Now he can accept carpentry jobs, and his wife who also used to help in the piggery can attend to her sewing and their sari-sari store.

Bernabe holding Azolla which is one of the
supplemental feeds for hogs and free range
chickens being tried by Agrichexers at its
experimental farm.

The contract growing project is a win-win situation for both the contract grower and the cooperative. Although the live weight price of fatteners has seen ups and downs, every batch has always been profitable so far for the coop and the farmers, according to Eladio Umban.

Last December, Rowena Diaz sold 19 fatteners to the co-op and received Php18,000 as her share of the profit. That means a share of Php947.36 per head. Not bad at all, considering that she did not spend for the piglets, the feeds and medicines. Rowena, according to Eladio Umban, is taking care of a hundred head of different ages. The co-op, on the other hand, got a share of Php12,000.

Under more favorable circumstances (when the price per kilo liveweight is high), the profit could be much more. For instance, Gil Garcia explained that in the feedmill’s research farm, a weanling raised with their premium feed will attain 100 kilos in a feeding period of 160 days. The total cost of production that includes the cost of piglet, feeds and medicines is about R85 per kilo liveweight.

During our interview (January 20), the going price was Php110 per kilo liveweight. At this price, therefore, the margin is Php25 per kilo. Therefore, the margin for a 100-kilo slaughter pig would be Php2,500. Under their profit-sharing scheme, the contract grower would get R1,500 per head while the co-op’s share is Php1,000.

It is very likely that most of the contract growers will not obtain the same results as with the research farm of the feedmill. At any rate, Gil Garcia said that a share of about Php1,000 per head is a very attainable goal. And if the raiser will be able to sell about 20 head per month, that will mean a net income of Php20,000 a month which is not bad for a person living in the province.

The co-op has an incentive scheme that will motivate contract growers to take good care of their pigs. If there is no mortality, they get a bonus of Php250 per head.

Gil Garcia is very proud that the meat produced by the contract growers is of high quality that can compare well with the best pork from commercial farms. The back fat is thin and the meat is marbled. That is the reason why buyers prefer to buy their live hogs as well as their pork.

The co-op, by the way, has its own mini slaughter house in the research farm of the feed mill. It processes the meat into sausages, tocino, tapa and the like. It also operates a small restaurant where they serve dishes using their own meat.

The high quality of the meat can  be attributed to the balanced feed formulation of Agrichexers, according to Garcia.

The co-op is also maintaining a group of contract breeders who take care of supplying the piglets required by the contract growers.

Producing piglets can be profitable too. After insemination, the sow will give birth about 115 days later. In 30 days the piglets are weaned and ready for delivery to the contract growers. Usually, the co-op buys the piglets at Php2,500. So if the sow has 10 piglets in one farrowing, the breeder can gross Php25,000 in a cycle of five months or thereabouts per sow.

The technical men of the co-op provide advice to the contract breeders. Eladio Umban, for one, can also perform artificial insemination for them.

The co-op is also encouraging the pig growers to raise broilers alongside their pig projects. After all, they don’t spend a lot of time in taking care of their pigs. That way, the farmers will have a more steady cash flow throughout the year.

The broiler contract growing scheme is much like that in hogs. The co-op provides the chicks, the feeds and medicines. When the birds are ready for harvest, the co-op will buy  them and sell them to pre-contracted buyers. Some of the birds will be dressedin the mini slaughterhouse at the research farm of Agrichexers Corporation. These are processed into chicken nuggets, chicken sausage and the like. Some are used in the co-op’s restaurant.

During our interview, there were 26,000 broilers being raised by the contract growers. This number is very small compared to the growers of the big integrators. But then, the purpose is to enable ordinary households to make money even if they are just raising a small number.

The contract growers of broilers raise as little as 500 while the biggest raise 4,800, according to Eladio Umban. The grower who has been raising 500 birds at a time is Ana Dizon, a senior citizen. The 500 broilers have given her an exceptional return in her last batch which she sold last December.

Agrichexers Corporation has been playing a big role in the contract growing program of the
cooperative which is also owned by most of the officials and employees of the feedmill. Agrichexers has been producing premium feeds that enable the animal raisers to achieve
efficient and cost-effective operations. The company operates its own research farm where it tests the efficacy of its products.

It is also adopting cost-reducing techniques like the use of fresh and carbonized rice hull for pigpen flooring. It has proven that fermented noni juice is effective in preventing disease of broilers. It is also using azolla as supplemental feed for pigs and
free-range chickens.

Agrichexers has been experimenting on early weaning of piglets. Some litters are weaned as early as 17 days after farrowing. To produce healthy piglets, the company has proven that giving the 6 to 8 kilos of quality feed every day will result in really healthy piglets.

The company was incorporated in 2002 by veterans in the feedmilling business led by Gil SP Garcia. He was the first Filipino employee of the Purina feedmill in the Philippines who later became the company’s country manager in Central America based in Guatemala.

When Purina Philippines was bought by another multinational company, he and other executives decided to put up their own feedmill and that is the Agrichexers based in Sta. Maria, Bulacan. It is now milling several hundred tons daily.

Gil Garcia is very proud to claim that the users of their quail feeds produce bigger eggs with better shell quality. They are selling 1,000 tons of quail feeds a month. Which means that at any given day, some 1.6 million quails are consuming Agrichexers feed at 23 grams per bird.

Mr. Garcia is really concerned about the interest of the small animal raisers that is why their cooperative thought of launching their contract growing program. Although the program has its modest beginnings, it is gradually expanding. The hope is that similar companies in other places in the country will follow a similar scheme to help the marginal farmers.

The Agrichexers founders aside from Gil SP Garcia who is a mechanical engineer, include Mercy Buyoc, animal nutritionist; Pete Magtibay, sales director; Marites Marcelo, chief financial officer; and Rodolfo dela Peña, production manager. For a long time they occupied the same positions at the old Purina Philippines. It’s no wonder, they know their feed business.

Even in the construction of their feed milling facilities, they were able to save at least half of the usual cost because they had them fabricated locally. Only the pelletizing equipment was imported from Germany.