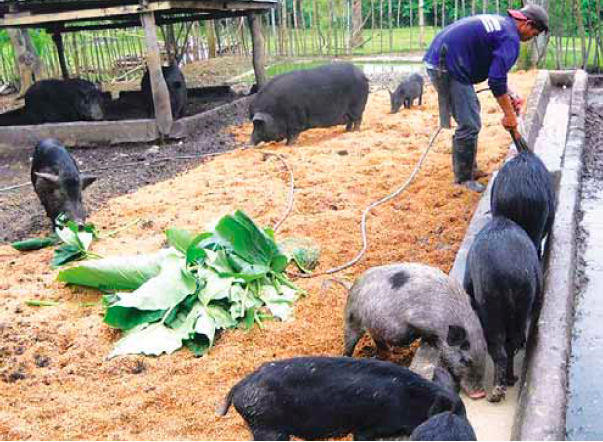 The co-op’s native pigs caretaker, Edison Agustin, feeds the animals at the demo module with gabi leaves and rice bran.

A cooperative in Isabela has been giving good livelihood to its members.

The PAYOGA/Kapatagan Multi-Purpose Cooperative of Gamu town in Isabela province didn’t start with that name but was simply known as PAYOGA—Parents and Youth of Gamu—a non-government organization founded by Dutch national Dirk De Temmerman in 1985 when on assignment to the Philippines as volunteer social worker with Lievia Couvreur. After a six-month language study period in Manila, the duo proceeded to Isabela.

The many out-of-school young people that he saw in Gamu stirred De Temmerman to organize the association to help the children enrol in schools, but he discovered a bigger problem after most of the youth began dropping out of their studies.

He found that they came from poor farm families that couldn’t afford regular nutritious meals, medicine for ailments, and for the school needs of the children. Many of them owned no land but tilled the soil as tenants. Both these farmers and those who owned a hectare to two hectares of land were perennially deep in debt for inputs for their rice or corn crops.

Saying he was not a rich man and couldn’t help the families financially, De Temmerman in 1992 had PAYOGA converted into a cooperative that could approach funding institutions for financial aid. With the help of friends back in Holland he raised Php100,000 for the co-op’s capital.

Focusing on the reduction of the cost of farm inputs, especially fertilizer, the cooperative began training its members in organic farming technology, teaching them how to process farm wastes into organic fertilizer and raise livestock on what they grew in their farms. The co-op’s direction helped many farmers in the mid-1990s when inorganic fertilizer costs began soaring because of the oil crisis.

When it began receiving grants from foundations abroad, the cooperative used most of its funds to lend to farmers at low interest rates. To qualify for a loan, farmers had to adopt the integrated organic farming technology that the cooperative espoused and taught. They had the option to produce their own organic fertilizer or to buy it from the coop which had begun manufacturing it.

Today the co-op has 560 regular and more than 2,000 associate members, and assets of over Php38 million. It operates a 5.5-hectare mostly-hilly farm in Gamu’s Barangay Guibang. Its main income-generating project is the manufacture of processed organic fertilizer from chicken manure, carbonized rice hull, and enzyme-hastened compost. It sells the fertilizer under its Greenfriend brand at Php250 per bag. Members get a 20 percent discount for every bag they buy.

“At peak demand for Greenfriend, we sell up to 125,000 50-kilogram bags a year,” says
Julie Madrid, the cooperative’s general manager. Madrid joined in 2000 as a cashier after working with a rural bank and, later, a commercial one. “We employ 50 workers in its manufacture. Our biggest customer at present is the Department of Agriculture (DA) here in Region 2, although we also have regular buyers in Region 1 and Calabarzon.”

Madrid says that the co-op has just bought a three-hectare lot in a distant barangay of Gamu; it will transfer its organic fertilizer operations—which it upgraded in 2012 with the help of the Department of Science and Technology—there so its main farm will be more presentable as an agri-tourism destination when the co-op decides to pursue its development as such a farm.

“We now have excellent facilities for training farmers here, and can easily qualify as a day agri-tourist farm because we can avail ourselves of catering services for lunch and snacks,” says Madrid. “In fact, DA Region 2 officials say they always enjoy the ambience whenever they hold their planning sessions here. We are about half a kilometer from the national highway, the Cagayan Valley Road, so it’s cool, quiet, and peaceful, especially with the many trees around our hilly terrain.”

Encouraging Integrated Farming and Other Technologies

To enable its members and other farmers in and around Gamu to be more productive and more
profitable, the co-op has been encouraging and helping them to grow crops other than rice and corn, and integrating livestock raising in their farms. Many of the farmers now grow mongo in their fields after their main rice or corn crop. Aside from considerably helping enrich their soil when they plow under the plants as green manure after harvest, mongo production is highly profitable in central Isabela. Gamu is just northeast of San Mateo town, the so-called “mongo capital of the country.”

This is the co-op’s rice hull-fueled furnace dryer for the palay, corn, and mongo harvests of farmers.

To help the farmers solve the problem of drying their rice, corn, and mongo harvests, especially in the rainy months, the cooperative offers them drying services with its two grain and seed dryers one of which is equipped with a biomass furnace that uses rice husk as fuel. The co-op charges farmers Php6 per cavan of rice, corn, or mongo dried.

It sells four-month-old native pigs for lechon at Php5,500 to Php5,700 per head. At its one-hectare hillside free-range rearing site for the native fowls and swine at the property’s northern end, the co-op has more than 80 head of the organic pigs that feed on greens grown in the farm supplemented with rice bran.

In addition, the co-op has dispersed about 100 sows to farmers in Gamu and Benito Soliven towns to enable it to sustain the supply of pigs for lechon year-round. The dispersal recipients pay for the stock by returning to the co-op half the number of piglets in the sow’s first litter while retaining ownership of the sow and the rest of its piglets.

The co-op’s native pigs caretaker, Edison Agustin, feeds the animals at the demo module with gabi leaves and rice bran.

“We also chose 10 recipients of three piglets each from the Gamu Rural School, a vocational high school where students take agricultural subjects from their second to fourth years,” says Madrid. “The students, who are from our members’ families, raise the piglets in their spare time and have the option to sell two of the pigs when these are of age (and to keep the price paid) as their income. But they must retain the third pig, a female, and have it bred so they can return half the number of piglets in its first litter as payment for the stock that they received from us.”

A big marketing firm in Metro Manila has told the co-op that it can absorb as many as 150,000 head a year of the native pigs for lechon. Madrid says that for now, it’s a very large order and that they cannot possibly supply a respectable portion of it.

Another income-generating project of the cooperative is the production of forest and fruit tree seedlings such as those of mahogany, coffee, cacao, rambutan, guayabano, and others.

“Aside from what we produce in our farm, we trained about 50 of our members to produce seedlings in their own farms or home lots,” says Madrid. “The most in-demand planting
materials are those of coffee and cacao. We helped supply the requirements of a large agri-venture in Quirino province that needed 50,000 coffee and 80,000 cacao seedlings. The cacao that we supply are of the BR-21 and K-5 varieties. We sell budded seedlings for Php25 each, seed-grown ones for 15 to 20 pesos each.”

The cooperative also owns a tractor that it rents out to farmers for their land preparation needs. Co-op members pay less to rent it than non-members do. The machine eases and speeds up the farmers’ plowing and harrowing tasks, enabling them to meet their planting schedules.

PAYOGA/Kapatagan Multi-Pupose Cooperative has helped rid Gamu of the problem that first caught the attention of Dirk De Temmerman in 1985. Schools in the town are now well-attended, with the Gamu Rural School having over 1,600 enrollees in its two campuses, testifying to the farm families’ placing importance on vocational and particularly agricultural education for their youth. They do not forget that their lives changed for the better when their cooperative began teaching them new farming technologies.

In 2011, the co-op won as Region 2’s Outstanding Organic Agriculture Organization in the DA’s annual Gawad Saka Awards. The Department of Trade and Industry in the Region recognized it as an outstanding supporter of small and medium enterprises in the Cooperatives Category of the DTI’s 5th One Town One Product (OTOP) Congress in November 2012.

In addition to the 50 workers in its Greenfriend production operations, the cooperative has an office staff of seven female employees and six male workers for the farm.

A Thai Tilapia Hatchery in Bataan