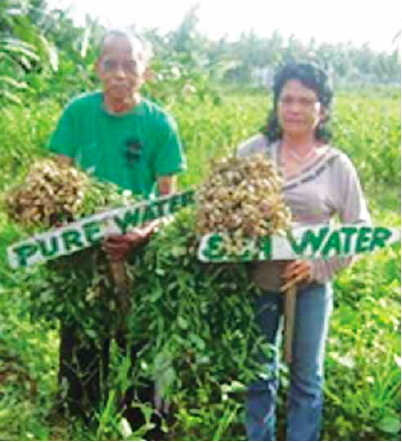 Cuyacot holds harvested peanut watered with sea water with pods almost double the size of that of the plants watered with ordinary water held by her husband.

Did you know that you can increase the yield of your peanut by irrigating your plants with sea water?

That’s what a farmer scientist from Ubay, Bohol discovered in her experiment. The farmer scientist is Cirila Cuyacot, a participant in the Farmer Scientist Training Program (FSTP) that was launched in 1994 by Dr. Romulo Davide, a professor emeritus at UP Los Baños.

Under the program, ordinary farmers are taught the scientific ways of growing crops by experts from UP Los Baños and other agencies who conduct lectures and hands-on practice. They are called farmer-scientists and they are also encouraged to do their own experiments in their own farms.

Cirila Cuyacot holds the peanut plant watered with sea water that is much bigger than the one watered with ordinary water.

This could be a practical way of increasing peanut yields near coastal areas. It is something that is very doable and will not cost much.

Will It Work with Coconuts?

There is also this hunch that watering coconut trees with sea water could possibly do wonders. It may even be better than the recommendation of the Philippine Coconut Authority (PCA) to apply two kilos of salt per mature coconut tree. What may be needed is to have researchers from UP Los Baños or some other universities to conduct research on the matter so that a protocol could be developed with a scientific basis.

Peanut plants grown in a plot and watered with sea water are vigorous.

If it works with coconut, perhaps some enterprising investors could invest in a pool of tankers that will haul sea water to coconut plantations within a reasonable distance from the sea.

Another farmer scientist placed seaweeds on developing ears of corn. He observed that the seaweeds must have repelled the insects that lay the eggs that become earworms. Those treated with seaweeds were not attacked by earworm.

An indigenous Blaan farmer scientist, Ricardo Tangge, from Alabel in Sarangani, tried his hands at plant breeding to produce his own hybrid corn. He was very successful in producing a white corn hybrid that produces big ears. And he made money by selling the seeds for planting at Php50 per kilo.

Cuyacot holds harvested peanut watered with sea water with pods
almost double the size of that of the plants watered with ordinary water held by her husband.

The FSTP, by the way, was conceptualized by Dr. Davide aimed at improving corn production, first in his hometown of Argao, Cebu. At that time, the farmers were just getting about 500 kilos of white corn from one hectare. It was a challenge to him. He knew that if the farmers adopted improved practices like improving the soil, using improved varieties and other techniques, production could be significantly increased. And he was right.

After the farmers have adopted the scientific techniques, corn production increased to five to six tons per hectare. As a result, many of the farmers have produced surplus corn (more than their family’s requirement) which they sold in the market. Some farmers sold their surplus corn for as much as Php37,000 per hectare. And they also derived an income from their vegetable crops of about Php100,000 per family.

Boyet Laguna, a farmer
scientist, shows the big
ears of his white corn.

As a result, many of the farmers were able to replace their nipa huts with concrete houses and bought appliances like refrigerators, television sets, radios, motorcycles and the like. They were also able to send their children to school.

In Cebu alone, FSTP has trained no less than 30,000 farmers to grow crops and farm animals the scientific way. Of course, training was conducted by experts who have volunteered to help Dr. Davide implement his vision. Many more farmers have also trained under FSTP in other provinces that include Siquijor, Bohol, Mindoro, Sarangani, Bicol and others.

By the way, who is a scientist? Dr. Davide quotes a Scientists’ Journal in the US, thus: “He watches things. He reads. He finds out how things work and how they can be made better. He wonders. He experiments. He finds out what is true. He sees that wonderful things do indeed happen.”