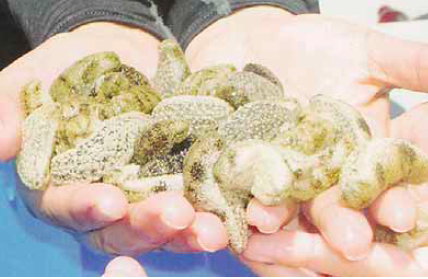 Philippine Sea Cucumbers used to abound in the country’s coastal waters. Anecdotal accounts from the 18th century hold that the daily harvest of sea cucumbers could be measured in sacks. Back then, the Philippines was the world’s largest producer of high-value sea cucumbers.

According to Dr. Marie Antonette Juinio-Meñez of the UP Marine Science Institute (UP MSI), the Sulu Sultanate was known to have prospered from trepan (dried sea cucumber) trade with Spain and China. In fact, she added, trepan was included in 48 out of 67 voyages (whose cargo was known or listed) from Sulu to Manila.

There are about 200 sea cucumber species in the country, 40 of which are of high value. However, the Philippines has slid to third place in the world as a sea cucumber producer.

Sea cucumber fisheries have been heavily depleted due to unregulated fishing activities and habitat destruction. In addition, these fisheries have shifted from low volume, high value fishing to high volume, low value production.

Due to the gravity of the current scenario, a national program on sea cucumber was developed. It aims to restore sea cucumber fisheries and bring back a viable economic activity through national fora and regional and local consultations with different stakeholders.

The strategic goal is to establish a sustainable and globally competitive sea cucumber industry, which will provide equitable economic benefits to various stakeholders, and maintain the productivity and biodiversity of sea cucumber fisheries in the Philippines.

One approach to addressing the overall problem is to increase the production of premium grade-size sea cucumbers. A one-year national resource assessment conducted by 13 state universities and colleges with funding from the Commission on Higher Education (CHED) revealed the high diversity of Philippine sea cucumbers. These, however, are in peril.

While the assessments were but a snapshot of the situation in strategic areas, the results were highly significant. Through the resource assessment program, the available sea cucumber resources are now known. This information can be provided to local resource managers to improve the management of sea cucumber fisheries.

According to studies, the best method is still to manage the natural stocks in their natural environments. The passage of a fishery administrative order by the Bureau of Fisheries and Aquatic Resources (BFAR) has set size limits of 320 grams (g) for harvesting and processing. Together with the Philippine National Standards for dried sea cucumbers set by the Bureau of Agriculture and Fisheries Product Standards (BAFPS), these provide the essential enabling policies to help improve the production of premium grade-size sea cucumbers to abate further depletion of natural stocks.

At present, the country is able to culture only one out of 40 high-value sea cucumber species—the sandfish (Holothuria scabra)—in hatcheries. The development of commercial-scale production studies is being done with two of the biggest aquaculture
corporations in the Philippines: the Palawan Aquaculture Corporation (PAC) and the Alsons Aquaculture Corporation (AAC). As Dr. Meñez stressed, public-private partnerships are essential to speed up commercial hatchery production coupled with grow-out production systems engaging commercial and local fishers with the support of the local government.

The Vision of an Eco-Labeled Production System

To support the sustainable development of natural and culture production systems, studies on genetic stock delineation using advanced molecular tools and markers are being undertaken by Dr. Rachel Ravago-Gotanco of UP MSI. Such molecular approaches provide a means to monitor and ensure a supply of quality broodstock in hatcheries and in the wild.

“More importantly,” Dr. Gotanco added, “studying natural populations is essential for biodiversity conservation, particularly if hatchery-produced animals will be used to restock wild populations.” They are also screening for molecular markers associated with growth performance traits that may be useful in broodstock management and selection.

The culture and hatchery production of juveniles are at best the turf of the private corporations as there are existing facilities for larval rearing and other support activities such as natural food culture.

However, growing hatchery-produced juveniles to harvestable size may be more efficient and effective for the local government units to manage. Academic and research institutions are available to provide technical guidance.

The postharvest team of UPLB demonstrated the use of the mechanical
cleaner deployed at PAC, together with PCAARRD Executive Director
Patricio S. Faylon.

Another approach to addressing the problem is the production of high-value trepan. For more than a decade now, the Philippines has been unable to produce high quality trepan. The current processing and drying practices of fishers results in products with undesirable moisture content, excessive salt levels, the presence of microbial and physical contamination, and poor sensory quality.

Furthermore, the supply of high-value species has already been depleted. This results in a significant reduction in the buying price of dried product.

Dr. Kevin Yaptenco of UP Los Baños (UPLB) was challenged to produce class A premium grade trepan. Dr. Yaptenco conducted field assessments and held a series of meetings with the National Fisheries Research and Development Institute (NFRDI) to acquire clear firsthand information on the postharvest processing of sea cucumber. This led to the development of a prototype production line that is suitable for small operations. It is composed of a degutting table, mechanical cleaner, and hybrid dryer, and it is currently being tested in coastal communities.

Test results have shown that the final quality of dried product could meet Philippine National Standards (PNS) for trepan, with buying prices at the Class A level. Initial profitability analysis has shown that using the hybrid dryer alone, gross income from dried sea cucumber could increase by 77% due to improvements in the quality of the final product.

These are the BFAR Fisheries Administrative Order on Size Regulation for Sea Cucumber Collection and Trade, and the BAFPS Philippine National Standard (PNS) for Dried Sea
Cucumber. UP MSI, UPLB, the Philippine Council for Agriculture, Aquatic and Natural Resources Research and Development (PCAARRD), and NFRDI served as members of the technical
working group for the two national policies. State universities and colleges and PAC and AAC serve as program S&T partners.