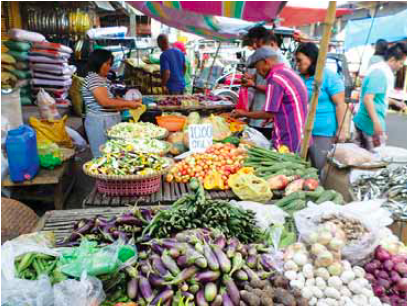 Farming is a business and it is just like any other business. If you are smart, you can make money. If not, you can even lose your shirt.

Well, here are a number of smart money-making tips in farming. They could inspire you, and who knows, you might also get rich in farming.

1. READ, LISTEN AND CIRCULATE – How’s that? You have to read agricultural publications, listen to radio programs on farming, and attend seminars, trade fairs, farm tours and the like. You can pick up bright ideas from these activities that can make you well off.

One example is Benito Magaling of Lipa City. He used to be a big-time raiser of hogs and poultry but was losing a lot of money because of the high cost of feeds and medicines.
He happened to read the story that we wrote about the very prolific Django finger pepper developed by East-West Seed Company. He gave up his livestock and poultry projects and
shifted to producing Django pepper, a ‘pangsigang’ variety.

He also had a smart way of harvesting two tons a day. He divided the two hectares into seven parcels, and harvested from each lot daily. To harvest two tons in less than a day, he hired 20 women pickers, each one just harvesting 100 kilos.

2. RENT A STALL IN THE PUBLIC MARKET – The most common problem of many farmers is how to market what they produce. A smart farmer that we interviewed in Cagayan de Oro had a simple solution. He rented a small space in the public market for Php14 a day. And that’s where his wife sold their daily harvest of upland kangkong.

He was making money at the time of our interview. Every three days, he planted one kilo kangkong seeds costing him Php250. That one kilo of seeds produced Php3,000 worth of leafy harvest in a matter of 25 days, all sold through the market stall.

Here’s another one. Long before Typhoon Yolanda struck Tacloban, we interviewed a farm entrepreneur who produced various vegetables, eggs and pork. He rented a big space in the
public market manned by his wife and daughter-in-law. All the harvests from the farm were sold in that rented space. They sold at least Php2,500 worth every day. That was a big amount in those days. The peso still had a high value.

And here’s another fellow who saw the wisdom of renting a space in a busy market. The fellow had a big poultry farm in Cavite. For many years, he supplied the requirements of a
big hospital headed by a relative. The problem was that the hospital was very slow in paying. The cashier would often tell him to come back another day.

Then he decided to rent a big space in a busy market somewhere in Zapote. When we talked to him, he was so happy for having rented a space there. He said that egg distributors
who pay cash are most of his customers. He just brought all his daily production to the market and did not have to pass through traffic delivering his eggs to Manila. Well, here are just a couple of tips you might want to try.

3. FIGURE OUT WHAT YOUR MARKET NEEDS – We remember a tilapia farmer in Tarlac that we interviewed several years ago. Unlike most fish farmers who grow their tilapia to 250 grams each, or four pieces to a kilo, he harvests his fish at only 125 grams or eight pieces to a kilo.

Small tilapia also has a market – families with modest means.

He figured out that his target market consists of families with many members who are not exactly well off. He thought that such families will buy the smaller fish so that each member will have at least one whole fish during meal time.

He was right. He sold a lot of small tilapia. Although that meant he had to use more fingerlings, it was all right with him. After all, he had a hatchery.

4. HE TARGETED HIS TOWNMATES – A poultry raiser in Calaca, Batangas that we interviewed years back had a smart strategy in marketing his eggs by targeting his townmates. It happens that many of the bakeries in Metro Manila are owned by families from Calaca. What he did was to offer his eggs to the bakery owners at a lower price than most suppliers.

His marketing was made simple. He delivered his eggs two times a week. Every time he delivered, he would be paid for the delivery the previous week. That certainly was a smart
strategy.

5. SHE TARGETED RICH PEOPLE – There is a niche market for high-quality farm produce. And that’s the target of a lady we know who is based in Zambales.

There are people who are willing to pay a high price for high quality mango
and other fruits.

She has loyal buyers of really big and properly ripened mangoes that are sweet and juicy. Although her price is about double that of the ordinary fruits available in the market, her customers don’t mind paying a high price.

Her clientele consists of many rich Chinese and celebrities. They buy her special mangoes because they usually give them as gifts to special persons like their lawyers, accountants, friends confined in the hospital, and the like. Of course, they also buy the same for their own families.