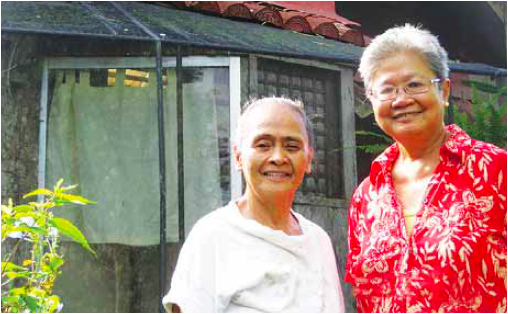 Felma “Sister Isyang” Lagahit, 73, and Emma Alday, 70, have practiced natural farming while teaching farmers the principles of the same.

For over 40 years now, Felma “Sister Isyang” Lagahit, 73, and Emma Alday, 70, have practiced natural farming while teaching farmers the principles of the same.

Lagahit and Alday were nuns before they discovered that farming was their true calling. In 1970, they started with a 200 square meter backyard garden in Brgy. Behia, Tiaong, Quezon, which they planted to various vegetables. Back then, their produce was chiefly for personal consumption and gifts for neighboring friends.

In the 1980s, they acquired an additional 0.89 hectares (ha), which they intended to use for rice production. At that time, they harvested 80 cavans/ha using conventional farming practices, which used a lot of chemical and synthetic fertilizers. But they noticed that with every harvest, their produce was gradually declining despite the consistent use of the same amount of inputs.

“We would be bankrupt if we continued to practice inorganic farming,” said Lagahit, who explained that to achieve their desired harvest, they would have to constantly increase the amount of inputs they used. So she and Alday decided to do research on organic farming at the University of the Philippines in Los Baños, Laguna.

At present, the former nuns are planting organic rice on three ha, while almost four ha of their farm are planted to coconut and fruit trees. They mostly use vermicompost as basal fertilizer for their rice, and fermented plant juice (FPJ) as foliar fertilizer; this has been their practice for about 20 years now, and they are getting yields of 50 to 60 cavans/ha. While their yield may seem low, the cost of production is also low; hence, their operations are profitable and sustainable.

Fruit trees such as mango, chico, rambutan, lanzones, and other tropical fruits are also planted on the farm. When Typhoon Glenda struck the country in July 2014, 20 of their trees (including mahogany and coconut) were toppled by the strong winds. The farm is currently recovering from the disaster.

Crops, organic livestock, and other practices Vegetable gardens are planted with corn—both
white and sweet—and pakbet vegetables such as eggplant, okra, tomatoes, sitao pods, bitter gourd, and squash. Amazingly, even without a greenhouse, they are able to produce asparagus, cabbage, cauliflower, and lettuce, but only from November to February, when temperatures are relatively cooler. They use their small spaces to produce crops, such as radish and cucumbers on the rooftop of their guest house. Also, there is an area intended for the production of the high-value dragon fruit.

Sister Emma among the Savory Reds or Atsuete for flavoring.

Goats and swine: There is one goat house that has double-span roofing and slatted flooring
for good ventilation. The goats there are crosses of Saanen, Boer, and native breeds. Goats are either grazed by the farm workers or fed with forage during rainy days. The house also shelters a pair of sheep. Alday notes that in the Bible, goats and sheep are not supposed to be together.

There are four swine buildings on the farm with several pens for nursery, grower, gestating, and lactating swine. Most of their swine are of Philippine native breeds, and therefore don’t need vaccinations. These are fed with chopped leaves and succulent stalks such as water hyacinth, swamp cabbage, and assorted plants found in the farm. Trichantera leaves are also fed to the swine as a protein source.

These fish are also fed only with chopped leaves that can be found within the farm. The mature fish are harvested only when these must be cooked for personal consumption, and are seldom harvested for extra income. These small-scale fishponds were established to show farmers that they can copy the model even on a small farm.

Lagahit and Alday’s studio-type house is surrounded by ornamentals with a separate traditional kitchen. They also have two guesthouses and a solemn prayer room; a seminar hall and mini rice mill are currently under construction. Indeed, theirs is a fully integrated farm; they maintain this with the help of eight farm workers.

Farm wastes such as kitchen scraps, fallen leaves, and dried animal wastes are placed in the composting area. Large composting materials are shredded for faster decomposition. After 3 weeks of composting, partly decomposed materials are then transferred to the vermibeds for the consumption of worms that will eventually produce vermicompost (combination of vermicast and compost). This is their source of basal fertilizers,
which are used in soil media mixes and land preparations.

Lagahit shared some of their secret farm organic concoctions. They basically produce FPJ from parts of certain plants, including various leaves and fruits, through fermenting these ingredients in molasses. Also, she advised the use of lambanog (coconut wine) if nutrients are being extracted from root crops (such as with ginger). “We can practically produce our own food, fertilizers, and medicine here,” she said. She doesn’t only teach farmers how to make organic concoctions, but also how to create medicinal oils from herbs.

Felma “Sister Isyang” Lagahit, 73, and
Emma Alday, 70, have practiced natural farming while teaching farmers the principles of the same.

Lagahit and Alday are members of the Susi Foundation, a non-government organization that helps train and educate rural workers. The foundation owns a rice mill; nearby farmers can mill their produce here for free and market their harvest at prices approximately a peso higher than the going market price. Their foundation also offers small agricultural loans for organic farmers.

The primary goal of Lagahit and Alday’s farm isn’t really moneymaking, but to show farmers that they can be self-sufficient through natural farming. Thus, they offer both lectures and practical seminars on natural farming techniques in their demo farm.

Aside from free seminars, they also bring their farmers’ cooperative’s produce to exhibits and agri-fairs to help them sell their produce at reasonable prices.

“Many of those we taught natural farming (techniques) have lost their motivation to pursue (it), though they’ve seen the advantages. Natural farming is a spiritual activity; many have just learned it by head and not by heart,” Lagahit says, expressing her decades-old belief.

Though Sister Isyang and Sister Emma are no longer in their convent, they still spread goodwill through promoting sustainable organic agriculture, which helps protect the environment and consumers’ health while providing a reasonable livelihood for rural farmers.