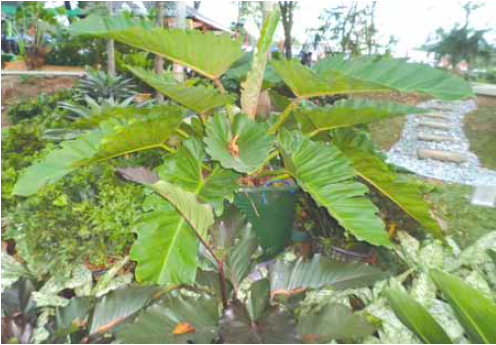 A huge philodendron that is also rare and expensive.

Grow something expensive, produce your own hybrid, specialize in a unique plant, and more!

You can Pick up bright ideas when you attend garden shows like the recent HortiKultura
Extravaganza at the Quezon Memorial Circle in Quezon City. Some are smart ideas that
enterprising people in the plant business can adopt and turn into cash.

The idea of growing something huge, rare and expensive came to our mind when we learned that the big variegated Rainforest foliage anthurium exhibited by Yuyung Lao was bought for a big undisclosed sum by a business magnate who is a certified plant lover.

This rare fern can fetch a high price.

The variegated Rainforest anthurium is really big and beautiful. Of course, producing it involved a lot of patience and luck. Why luck? Well, because one never knows when a mutant arises in one’s garden.

And growing the same into a large specimen also entails a lot of work: providing the plant the right growing environment, balanced nutrition, and protecting it from damaging pests. But then, the reward is also commensurate with the efforts exerted.

It happened that one of the seeds that Yuyung germinated came out variegated. It took some time though before he was able to develop the prize-winning specimen. He grew the variegated seedling and then topcut the same to produce new suckers through selection and reselection of the suckers, he finally got the plants he displayed at the garden show which caught the attention of the big spender.

HUGE HOT CHILLI – The big Red Hot chilli displayed by East-West Seed in its commercial stall reinforced the idea that there is a market for something big and outstanding. That
particular Red Hot chilli was bought for PhP 2,000. Imagine, if you can produce and sell a lot of that kind, you will be a very happy gardener.

REMEMBER MODY MANGLICMOT – When it comes to huge ornamental plants, we remember the late Mody Manglicmot who was known for his extra-large Boston ferns that were grown in big vats and perched atop concrete pedestals in his nursery at the former Manila Seedling Bank.

He used to run out of supplies of his super Boston ferns because landscapers, interior decorators and wealthy home owners bought them for Php4,000 or more, which was a fortune in those years.

TOM BROWNIE – We also remember Tom Brownie, who operated his own two-acre nursery in California. He also specialized in producing humongous Boston ferns with fronds as long as
six feet. And he supplied them to the White House during the presidency of Ronald Reagan. Of course, he sold each plant for a fortune. And as he said, because he is the sole owner of his nursery, he kept all the profit to himself.

Variegated Dillenia or Catmon is rare and expensive.

MANY OTHER PLANTS – There are many other plants that are good candidates for growing into big specimens that will command a high price. Let’s take a look at some.

While they are mostly slow growing, they will become big in time—say, 10 or 20 years. At
any rate, they require minimal attention. They are drought resistant and will grow under most circumstances.

We remember one friend of ours who was commissioned by a businessman collector of rare
plants to look for big cycads. Our friend was able to buy about fifty old cycads (20 years or older) at a minimum price of Php35,000 each. One fellow who had big cycads in his garden got Php210,000 for just six plants!

PHILODENDRONS – These are faster-growing ornamentals than cycads. And they can be really
gorgeous if cultured very well. There are, of course, many varieties and the newly introduced ones are understandably more expensive. These include the variegated Selloum, Red Congo, Giant Xanadu, and several hybrids.

PALMS – There are many varieties of palms, most of them slow growing. Many years back, when the Red Palm was considered a good-luck plant, the big ones really commanded a big fortune. One car dealer offered a brand new Toyota in exchange for a big red palm in front of the house of the late Dr. Dioscoro Umali in Los Baños.

We also remember a big property developer paying Php1,000 per foot of trunk of the date palm for landscaping. That was many years ago, when a thousand pesos could be the equivalent of 10 or 15 thousand pesos today.

FLOWERING TREES – Big specimens of flowering trees also command a fortune. One example is the Amherstia nobilis or Queen of Flowering Trees. Another is the variegated Clerodendrum
quadriloculare or Bagauak. One plant that was about four feet tall sold for Php7,000
during a recent garden show.

Produce Your Own Hybrid

BE A PLANT BREEDER – One more road to a possibly profitable plant business is to
produce your own hybrids. At the recent HortiKultura Extravaganza was Rey Pimentel, formerly with the Institute of Plant Breeding in Los Baños and now a consultant of Del Monte Philippines. At Del Monte, he produced hybrid papayas and pineapples for the company.

A huge philodendron that is also rare and expensive.

Earlier, he pioneered the breeding of hibiscus in Los Baños, producing a series
of hybrids he named after prominent women scientists and showbiz personalities.
At the HortiKultura, he discussed the techniques of breeding ornamental plants.

You don’t have to be a PhD degree holder to succeed in plant breeding. You can learn
that from the experts or you can do your own research through the Internet.

In Thailand, most of the new Aglaonema hybrids are the products of hobbyists. They have come up with many exciting varieties with colorful leaves. The breeders, of course, made a lot of money from their beautiful creations. Many are now available in the Philippines, thanks to plant traders who have brought them to the country.

Maybe, the Philippine Horticulture Society should hire a plant breeding expert to teach members of the society how to breed ornamental plants.

One may copy the strategy of Lino Rom, a hobbyist who is getting ready for his retirement from a teaching job. He is a certified plant lover who has his own money-making plans for
his retirement.

It takes time to grow this Dracaena fragrans, which is why a big specimen
is expensive.

After looking around, he noticed that no one was collecting Dyckia. This is a member of the bromeliad family but is very different from most bromeliads. It has spiny leaves that are tough and mostly coppery on the upper side and silvery in the underside. Many people think Dyckia is a member of the cactus family, which it is not.

What Lino Rom has done so far is to buy as many varieties or new crosses as he can and multiply them. At the same time he has been studying the cultural requirements and habits of the different varieties or strains.

His optimism was buoyed when he found out that Dyckia can grow in full sun and can really grow big given proper care. He is convinced that Dyckia can be a good landscaping material. He has seen some plants being used in outdoor gardens abroad.

In the past two years, Lino has accumulated no less than 78 varieties of Dyckia, most of them having no registered names because they are probably new crosses which may have been
produced by plant breeders abroad like Thailand and elsewhere.

Lino relates that some are very prolific in producing pups or suckers. Others, however, are stingy. As of now he has no less than 1,500 propagations of all sizes from his mother plants. He expects to produce much faster as more of his plants mature and produce their own suckers.

In the meantime, he volunteers to talk about his favorite plants whenever there is an opportunity in garden meetings and garden shows. That’s to build up interest of potential customers who will see the opportunities that Dyckia offers.

Bamboo with predominantly white leaves can be a money-maker.

Lino does not mind paying a high price for a variety he does not yet have. For instance, he paid Php5,000 for a very new variety. Many of his earlier acquisitions were pups that cost about Php300. He knows his investments could be easily recovered once he starts releasing his propagations. As of now, he is just releasing a limited number.

Maybe, upon his retirement in a year or two, he will have enough propagations to sell to the gardening public. By that time, he will have more time to multiply his plants and to talk about them in gardening events.

So this is the business strategy of Lino Rom. You don’t have to grow Dyckia like him. What you can do is also study one or two plants that you can specialize in. Study the potential market as well as the production side. If you are convinced that you have the passion for the plants you choose, by all means, don’t procrastinate. Chart your own path to gardening success.

Micro Cherry Tomato and Other Interesting Varieties at the Field Day in Tayug, Pangasinan