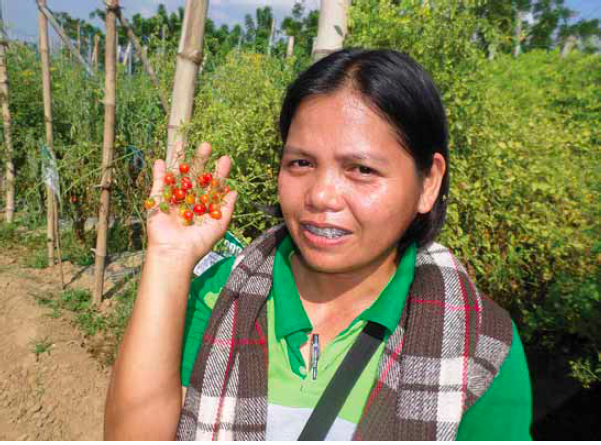 Every time we attend the annual field day at the experimental farm of Allied Botanical Corporation in Tayug, Pangasinan, we are always amazed at the many varieties that are showcased.

Of what good is this Lilliputian tomato? Very good for salads, says Rowena Bienes, an
agriculturist and senior staff of Allied Botanical. We didn’t see any seed in the mini fruits and although they are too small, they are juicy just the same.

The fruits tasted somewhat sour, not unlike the taste of the old variety of tomato grown in the Ilocos. We experimented by adding a dash of Balayan bagoong and ate them with rice. We liked it very much.

The small fruits come in clusters. The plants are really robust and they can grow up to more than five feet. That’s why they should be provided with a trellis or stake.

The big long fruits of the Japanese cucumber code-named VR-4 F1 also got our immediate attention. It is a favorite for making juice, according to Rowena Bienes. She said that it is a bestseller in the Costales Nature Farms in Majayjay, Laguna. In fact, Foster Martin has commented in our blog that he usually brings his family for lunch to the Costales farm to partake of the cucumber juice and to take out some fruits.

Another interesting cucumber is called Puccini. It is a seedless variety that is just about three inches long and ¾-inch in diameter. It is a cocktail variety that can be eaten right after picking, munching it like you do an apple. Of course, it can also
be prepared the way other cucumbers are served.

Puccini is an expensive variety. In fact, Rowena says that one unsprouted seed costs R25. But then she hastens to add that it is very productive. There’s a fruit in practically every node and one plant can produce as much as five kilos. The fruits usually sell for Php150 to Php200 per kilo. So it is possible for one plant to produce Php600 to Php1,000 worth of fruits.

Maribel Astejada, a graduate student at the
Central Luzon State University, poses with the fruitful Clarabel sweet pepper which is new and high-yielding.

There’s a new conical type sweet pepper, Clarabel, which is high yielding and has other desirable characteristics. Compared to other conical type varieties, it yields 7% more. The fruits weigh 85 to 90 grams each, which is 20 to 30 grams heavier than comparable varieties. The fruits are firm and crisp and have very good shipping quality. Moreover, it is adaptable for growing both in the lowlands and uplands.

Other promising sweet peppers include Green Hornet, a locally bred conical variety that is adaptable to a wide area. Weighing 50 to 55 grams each, the fruits are heavier by 10-20 grams than its counterparts in the market. Then there is the Excel variety, which produces big fruits that are harvestable starting at 75 to 80 days after transplanting.

Three other sweet pepper varieties are Yellow Gourmet, Red Gourmet, and Red Crest. They are all high yielding.

The new purple waxy corn contains anthocyanin which is good for the health.

Two new waxy or glutinous corn varieties were showcased during the field day. One is the purple waxy corn which is an improvement on the Batik or bicolor corn earlier released by Allied Botanical. Because of its purple color, it is claimed to be rich in anthocyanin which is good for the health.

The other is a white glutinous corn called WC Nutri LyT+ which was developed by the Institute of Plant Breeding in UP Los Baños. This was named after the late Willy Co, founder of Allied Botanical.

This new glutinous corn has enhanced lysine and tryptophan contents which are essential amino acids for human growth.

As such, it is ideal for children’s snacks. Ears weigh an average of 250 grams and are ready for harvest 60 to 65 days after seeding.

Cauliflower for the Lowlands

Bienes showing the big and compact head of Sunrise cauliflower which is good for lowland planting.

The white curd is not damaged by the intense heat of the sun because it has what is called wrapper leaves which cover the developing flower. This variety can be grown in the lowlands up to mid-elevation.

Two varieties showcased during the field day are recommended for commercial planting.
One is ABS 763, with long semi-compact heads. It is high yielding at 8 tons per hectare and the grains are of good quality.

Sorghum with compact head is high-yielding.

The other variety is MK 6638, which has loose heads. Having loose panicles is an advantage, especially when the crop is overtaken by showers or rain. Being loose, the heads are less susceptible to fungal damage.

Snap Bean for the Lowlands

Christie is the name of the variety of snap bean showcased at the field day. It is one
variety that is suitable for growing in the lowlands. Snap bean is often called Baguio beans (also habichuelas or bitsuelas) because it is traditionally grown in the upland region.

Christie snap bean is a variety that can be grown in the lowlands.

Now, with Christie, lowland farmers can also produce snap beans. The variety is high-yielding and has a long productive life because it is resistant to the bean rust
disease.

We were really impressed by the prolificacy of the finger peppers (pangsigang) that
were showcased. The one pictured here is particularly fruitful.

Several varieties are being tested at the experimental farm for their desirable characteristics. It is important that the variety is not only prolific, it also has to be resistant to pests and diseases. And the fruits have to be acceptable to consumers.

A lush plot of broadleaf kangkong attracted a visitor who is into organic farming.

The visitor was Fr. Eddie Panlilio, a.k.a. Among Ed, the priest who gave up his priestly robes to run for governor of Pampanga, and won. He has now given up politics and is into organic vegetable production at his Eden Farm in Cabalantian, Bacolor, Pampanga. One of the veggies that a big buyer wants to buy from him is upland kangkong at 700 kilos a day.

Rowena Bienes showed us an unusual member of the pechay family with deeply serrated leaves. This is the Mizuna pechay, which can be a decorative ingredient in green salads.

This is a member of the pechay family, only one with serrated leaves which can be used in green salads.

Other pechay relatives are the Pakchoi, likewise on order by the buyer of Among Ed at the rate of 300 to 500 kilos per day. Also in demand is the ordinary variety of Black Behi at the rate of 300 kilos a day. They should be organically grown, however.

There a few varieties of kale, a very nutritious vegetable. Most of these are used for cooking. But there was a new variety showcased during the field day. It is called Toscana, an Italian kale which is best for making juice.

This is a new variety of Italian kale which is best for making into juice.

Red amaranth is rich in antioxidants. This produces a lot of seeds
which can be sprouted for what is now called microgreens; these are made into salad.

There were two types of amaranth at the Tayug experimental farm: the red and the green. The red one is said to contain more antioxidants but both the red and green are nutritious vegetables. The good thing about these two is that they produce a lot of seeds. And the seeds are often used to produce what Rowena Bienes calls micro greens.

The seeds are sprouted en masse and then harvested to make salad when they have just a couple of leaves. These make nutritious salads. Other vegetable seeds that can be used to
produce micro greens are spinach, lettuce, pechay, and radish.

The sunflower which normally produces one big flower at the top can be induced to produce multiple flowers by stressing the plant, like planting over-aged seedlings.

How to induce multiple flowers is simple enough, according to Rowena Bienes. All you have to do is to stress the plant. One way is to plant over-aged seedlings.

Of what practical use is a sunflower with multiple blooms? Well, Rowena advises you to cut off the top at 12 to l5 inches with several medium-size flowers. Add an appropriate ribbon and voila! You have a beautiful bouquet.

There are tall and dwarf varieties of sunflower at the experimental farm in Tayug. The dwarf one which is not even one foot tall is called Sunburst Kid.

Producing potted sunflower could be profitable. At the field day, many attendees bought sunflower in black plastic nursery bag at Php75 apiece.

This year’s field day (February 11 to 13) attracted a record number of visitors. On the
first day, more than a thousand trooped to the event. One of them was Sen. Cynthia Villar with her staff; she is developing a module of an urban garden of edibles as well as ornamentals at her place in Las Piñas City. Michael Caballes, ABC president, quipped that the huge turnout of visitors could have been due to our announcement of the event in our column in the Manila Bulletin.

Ideas from the Garden Show