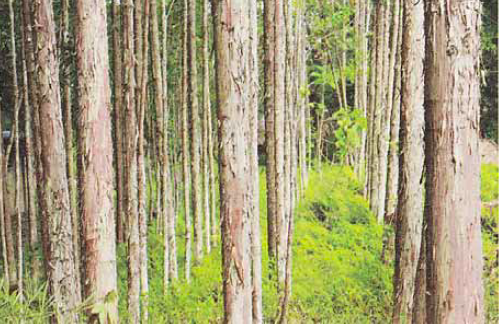 Bargas (Eucalyptus deglupta) (ED), an endemic and fast-growing species propagated for pulp and saw timber, is crossbred with Eucalyptus pellita (EP), an exotic species with denser wood, to improve its performance in terms of growth and other wood characteristics. The resultant hybrid grows better than their parents.

According to Siarot (1991), 3-year-old ED x EP hybrids grow 18 meters (m) tall compared with ED with 9 m and EP with 8 m. Its diameter at breast height reaches 16.4 cm while ED and EP recorded only 9.0 cm and 10.2 cm, respectively. The height and diameter of hybrids increased to an estimated amount of 30-50% in wood volume compared with both parents.

The big advantage of hybrids over their parents in terms of growth and wood density qualifies the species for small-scale and large-scale tree plantations. Hybrid seeds exhibit high variation in height and diameter growth. Selection of individual hybrid from among the F1 of remarkable growth performance and resistance to pests and diseases readily increases growth and yield. Clonal propagation by rooting of shoot cuttings is a good option in the mass production of hybrid bagras quality planting stocks.

Steps in the Production of Hybrid Bargas Clones

Producing the best-performing planting stocks in terms of growth, resistance to pests and diseases, and desirable phenotypic characteristics through proper selection of high-perf

A simple way to select high-performing individuals is by establishing sample plots and measuring the individuals’ height and diameters. Only individuals with above average scores are chosen as clone sources. Selection can be done in both young and old plantations. Choose 20 or more individuals from each trial plot depending on the intended volume of planting stocks. Propagate the selected individuals by rooting shoots, marcotting, or grafting.

A hedge garden of vegetatively propagated selected individuals should be established in an open, plain and relatively fertile area. The preferred spacing between plants is 1 m by 1 m; however, large spacing can be applied. Label or number the individual trees indicating its clone source. For easier identification, plant similar clones in lines or groups. Remove weeds and apply fertilizer to maintain the clones. The best parent for cutting is a healthy and well-cared plant that has stored abundant food supply. An average of 30 shoots can be harvested for every hill.

For small-scale clone production, a 1 m x 8 m plot is enough to produce 2,500 rooted cuttings every 30 days. The rooting shed must be covered with plastic roofing sheets (to prevent water drippings that cause mortality to the rooted cuttings) and 3-layer black fishing nets (to minimize the light intensity). The rooting shed must also be equipped with a pressurized tank and misting system.

When stock plants are about 3 m tall or 6 months old, cut individual plants at about 1 m from the ground. Leave 1-2 branches undisturbed to provide food and water for shoot development. After three consecutive harvesting periods, allow the hedge to recover for 3 months.

5. Harvesting and hauling of shoots

a. Age of shoots for harvesting
Shoots of hybrid bagras usually grow on stems and branches of the hedge plants. Two weeks
before shoot harvesting, spray insecticide on the hedge garden. Shoots are ready for harvesting at 30-35 days after pruning. Usually, there is a decline of rooting success after this time. Harvest only orthotropic shoots.

Orthotropic shoots have an upright growing habit compared with plagiotropic shoots which are branch-like. The immature part of the good stock parent plant nearest to the ground produces the best cuttings. The “Cone of Juvenility” is the cone-shaped section of the plant located low in the stem.

b. Time of shoot harvesting
It is a good practice to harvest shoots early up to about 9:00 a.m.

c. Handling of harvested shoots
Immediately after harvesting, place the shoots vertically in an enclosed container (e.g., ice box). Fill the container with water at about 2-3 cm deep. Avoid exposing shoots to direct sunlight. Keep the box closed when not in use. This is crucial if shoots will be transported over a long distance.

Upon arrival of shoots in the nursery, prepare the shoot cuttings immediately. Perform the process in the preparation shed with the following materials:

Cut the base of the shoot perpendicular to the stem at about 10-15 cm long leaving two
pairs of leaves. Use only the shoot tips and discard the rest. When shoots are limited, the lower stem with a pair of leaves may be used. Cut the leaves into halves. Soak
the prepared cuttings in the fungicide (Dithane M-45 or any fungicide) solution (1 tablespoon in 4 gallons of water).

Hybrid bagras roots even without rooting hormones. However, using commercially
available rooting hormes (ANAA and IBA) are recommended to hasten the root initiation and development of the cuttings. If rooting hormone is available in different modes of preparation (i.e., powder or liquid form), apply the following methods:

• for powder – dip the base of the cuttings prior to sticking; and

• for liquid – soak the base of the cuttings in the prescribed solution for 15
minutes prior to sticking.

7. Sticking of shoots in rooting containers

b. Potting
The rooting/potting medium is potted in 3 in x 6 in black polyethylene bags which
can accommodate 400 potting bags/m2. Arrange the pots in the rooting plot. Use a
stick with the size of shoot cutting’s stem to create a hole in potting bags.

Carefully take out the shoots from the pail with fungicide and insert the base in the
prepared holes. Firm the soil around the shoots to make them stand. Keep the newly
planted shoots moist by spraying water every 15 minutes using a hand sprayer.

It is best to coddle cuttings for good root development. The sooner the cuttings have
roots, the lesser chances they have to rely on limited stored food supply. Shoot cuttings are rooted in an open-mist rooting shed covered with a 3-layer black fishing nets.

Start misting/fogging at 8:00 a.m. and end at 4:00 p.m. Frequency of misting shall be
every 15 minutes with 30 seconds duration. Rooting takes 15-20 days. On the 20th up
to the 30th day of rooting process, reduce misting to every hour. After the 30th day, transfer the rooted cuttings to the hardening beds and apply complete fertilizer (14-14-14) at 1 g/pot. Reduce watering to three times a day. Clones are ready for outplanting after 60 days from rooting.

Chrysomelid Leaf Beetles
Family: Chrysomelidae
Description: Convex, oval, or elongated and small- to medium-sized ranging from 1 millimeter (mm) to 13 mm long; generally bare and with shiny upper surface often in metallic color; antennae is less than half of body length; sun-loving and feigns death when disturbed.
Distribution: Widespread
Damage: Both larva and adult feed on leaves, bore on roots and stems of herbaceous plants, or mine into leaves of woody plants; they are seldom very damaging (PCARRD 1995). On hybrid bagras, it mines the leaves and causes early defoliation or death of the affected part.

Suggested Control: If pest outbreak occurs, apply insecticide or pesticide. However, it is recommended to use organic insecticide/pesticide.

White Flies
Family: Aleyrodidae
Description: About 2-3 mm long resembles tiny white moths; body and wings covered with
whitish powder; disproportionately large and paddle-shaped, opaque, and whitish wings; forewings slightly larger than the hind wings and fold horizontally over the body when at rest (PCARRD 1995); and often occurs at the back of bagras hybrid’s leaves.
Distribution: Widespread
Damage: Tissue discoloration; if in large numbers, causes leaf curling of bagras hybrid.
Suggested Control: During early occurrence, wash the leaves with detergent solution or tap water. Fumigation is also advised. If infestation is epidemic, insecticide may be used.

Shoot Pruner/Stem Borer
Family: Buprestidae
Description: The common name is derived from the larva’s habit of making a hole in the shoot. Larvae mine in an upward direction from the hole and feed on the soft tissue at the center of the shoot, which develops tunnels with black stained walls.
Damage: The affected stem of bagras hybrid weakens while the damaged portion may break. The bores are easily noticeable due to the black stain and abnormal enlargement of the infested stem.
Suggested Control: Alternatively squirt contact insecticides into the hole, which is later sealed with putty. Cut severely damaged shoots just above the affected area and destroy the larvae tunnels.

White Grub (Scarabaeiform Larva)
Family: Scarabaeinae
Description: Usually curved with a well-developed head and thoracic legs but without abdominal prologs; relatively inactive and sluggish; larvae are the well-known white grubs that feed on the roots of grasses and other plants.
Damage: White grubs are very destructive insects that greatly damage pastures, lawns and crops (e.g., corn, small grains, potatoes, and strawberry). Its life cycle usually takes two to three years to complete (Borror et al. 1976). Larvae feed on the soft tissues of bagras’ hybrid root system, which leads to the death of the plant. Distinctive indicators of affected plants are the yellowing of the leaves and early leaves defoliation.
Suggested control: Dig the affected plants’ root system and destroy the larvae. Spray insecticide in the hole one week before planting.

Damage: Severe infection causes disintegration of necrotic tissue which may form shot holes and early defoliation leading to stunted growth of bagras hybrid.
Suggested Control: Plant a succession of different species on the seedbeds before they are planted again with the same species. Remove and burn all infected fallen leaves. Apply
fungicide before and immediately after the opening of the young leaves. Following the recommended usage, commercial fungicides, like Vitigran blueTM, CupravitTM, ZinebTM,
and AntracolTM may be used.

This appeared without a byline in Agriculture Monthly’s February 2015 issue.

Ideas from the Garden Show