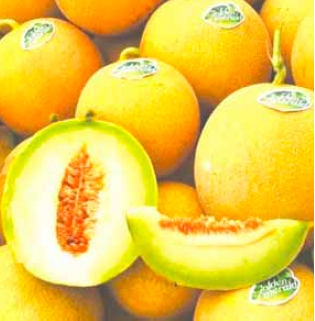 When some friends decided to invest in agribusiness in a two-hectare piece of land owned
by the family of one member in Barangay Tuyom in Carcar City, Cebu Province, they took
time to look for a crop whose harvests would not be difficult to sell profitably in the huge consumer market that’s Cebu City only about 40 kilometers to the north. Carcar itself is within the Metropolitan Cebu area.

Producing the chosen crop was not much of a problem for them because they were willing and able to invest in integrating the latest agricultural technologies to attain high yields of a high quality, pest and disease resistant crop with an assured market edge. They could also avail themselves of the services of an experienced crop technologist who was a good friend of theirs.

The agriculturist suggested melons, which the friends could produce as a semi-protected, drip-irrigated crop for close to year-round production.

Market research by the enterprising group showed that, in addition to their excellent prospects in Metro Cebu, melons are among the commodities being sought by a fresh fruits-andvegetables consolidating company with operations nationwide for distributing the produce to its client supermarket chains.

Initial meetings with a representative of the firm partly forged a vital marketing link for the investors’ projected harvests.

When some friends decided to invest in agribusiness in a two-hectare piece of land owned
by the family of one member in Barangay Tuyom in Carcar City, Cebu Province, they took
time to look for a crop whose harvests would not be difficult to sell profitably in the huge consumer market that’s Cebu City only about 40 kilometers to the north. Carcar itself is within the Metropolitan Cebu area.

Zenaida Alegrado (with sunglasses), wife of one of the agri-investors in the melon farm in Carcar City,
Cebu, her daughter and her sister pose with newly harvested Rijk Zwaan Golden Emerald and Carribean
Gold melons.

The friends and their adviser sat down in several construction and production planning sessions before implementing the project. They decided on growing several varieties of melons in 100-meter-long plots mulched with plastic film to control weeds and conserve soil moisture. The plots would be provided with drip irrigation to facilitate fertilization and avoid the need for laborious watering by workers—methods that would result in cost savings. The civil engineer among them proceeded to have the needed water system built according to the agriculturist’s specifications.

The group also agreed to grow their crops under rain-shelter tunnels with bamboo slats for the frames and polyethylene (PE) or polyvinyl chloride (PVC) film with ultraviolet (UV)-inhibitors as covering. The main consideration for the protective structures is their strength to withstand heavy rainfall and strong winds. During sunny weather, when temperatures can be a constraint to crop production, the tunnel covers can be easily raised for increased ventilation.

The Choice of Varieties

The group decided to try five hybrid melon varieties that it hoped to produce year-round initially for the Cebu and Bohol markets. These are Caribbean Gold, Golden Emerald, Gladial, Sweet Ball, and Fantasista.

The first four melons are from the Dutch company Rijk Zwaan. RZ Caribbean Gold F1 is a Western Shipper Cantaloupetype with oblong fruit whose firm, thick, bright-orange flesh
surrounds a seed cavity that’s much narrower than that of other melons. Caribbean Gold’s delightful smell, sweet taste, and excellent shipping quality make it the favorite of traders and consumers alike. Aside from its potential as a well-liked fresh dessert or snack, the melon is a good ingredient for fruit salads, sherbets, ice cream, yogurt, and pies.

RZ Golden Emerald F1 Melon is of the Galia Type; its fruit has a bright yellow-orange rind and sweet green flesh and, like Caribbean Gold, has a very narrow seed cavity, thus it also has very thick flesh. RZ Gladial F1 is a Yellow Canary type with yellow skin and flavorful white flesh, while RZ Sweet Ball F1 is a Honeydew Melon with a lightgreen
rind and sweet white flesh.

TK Fantasista F1, an Eastern Shipper Cantaloupe, is a variety developed by the Japanese plant breeder Takii and Company Ltd. It has lush, vigorous vines that are resistant to Downy Mildew, a common and widespread disease of cucurbits or plants of the Cucurbitaceae family, which includes squash, cucumber, watermelon, melon, and cantaloupe. Fantasista vines are prolific bearers of fruits that are of uniform shape and size.

Takii & Co., Ltd. is a 180-year-old company that develops, breeds, and produces seeds of
flower and vegetable fruit and leaf crops. Based in Kyoto, Japan, the company maintains breeding stations in the United States, Brazil, the Netherlands, China, South Korea, India, and Indonesia.

The company’s researchers were among the first to develop hybrid sweet melons in Japan.
The exclusive distributor of both the Japanese company and Rijk Zwaan in the Philippines is Allied Botanical Corporation (ABC).

After the construction of a nursery shelter with a floor area of 100 square meters, workers hired by the agri-entrepreneurs and closely supervised by the agriculturist sowed seeds of the melon varieties in seedling trays filled with Klasmann Peat Substrate, a seedling growing medium. The product ensures high seed germination and seedling survival rates, assuring growers that what they spend for seeds isn’t lost because of low or poor germination. In the Philippines, most commercial producers of high-value ornamental and vegetable crops now use Klasmann, both as seedling and potting medium for the ornamental
growers.

Meanwhile the agriculturist directed the improvement and preparation of the soil in the farm by forming long, onemeter-wide raised plots 45 centimeters high, with meter-wide depressions between them, then applying organic fertilizers like carbonized rice hulls and processed chicken manure, as well as 16-16-16, urea, magnesium sulfate, and calcium nitrate to the plots as basal application.

When the melon seedlings were 15 days old, the workers transplanted them on the plots,
spacing the young plants 30 centimeters apart in a single line, resulting in a plant population of 12,500 per hectare.

They fertigated the growing vines weekly through the drip lines with urea, 16-16-16 and muriate of potash dissolved in water at the rate of two bags of urea, 12 bags of 16-16-16, and one bag of muriate of potash per hectare.

Three weeks after transplanting (WAT), the workers sprayed the vines with a mixture of Peters Blossom Booster (9-45-15) and water. Peters is a brand of water-soluble fertilizer now widely used by many commercial ornamental and vegetable producers as foliar spray to supplement their regular fertilization regimen.

A week later, the fertilizer the workers mixed with water was Peters Hi–Nitro (30-10-10).

At five WAT, they used Peters General Purpose (20-20-20), and repeated with Peters Blossom
Booster a week later. At that time, before the vines attained a length of one meter, they pruned out the main stem so that only two lateral stems per vine developed. Each of those stems later bore at least one highquality fruit.

At eight WAT, they sprayed the plants with Peters Yield Booster (15-10-30). To prevent diseases, they also sprayed a mixture of Nordox 50 WP, a copper fungicide that’s a broad-spectrum weapon against fungi, bacteria, and water.

Melon pickers show some of the fruits they harvested at the Carcar City farm.

The workers began harvesting fruit at 12 WAT. Each plant produced one to two melons that weighed from 1.2 to 1.5 kilograms per fruit, placing the total harvest volume at about 25,300 kilos of mostly good-quality melons per hectare. The crop that had taken just a little more than three-and-a-half months to produce rewarded the agri-investors for their diligence and care in planning for the project before going ahead with its implementation, for not skimping on spending for it, and for following a crop expert’s recommendations and directions.

Micro Cherry Tomato and Other Interesting Varieties at the Field Day in Tayug, Pangasinan