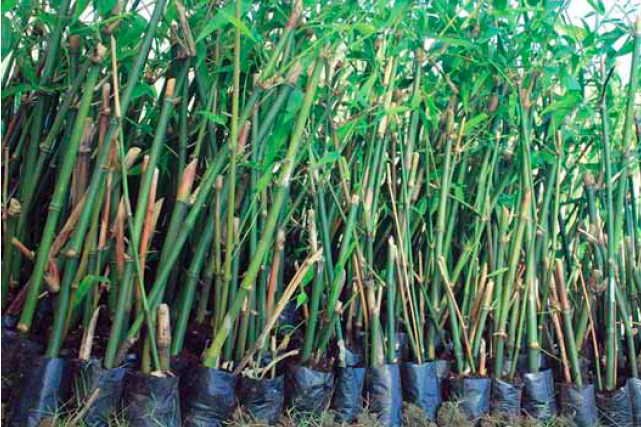 Tuguegarao City, Cagayan – Folks living near the banks of the mighty Cagayan River can look forward to a more verdant community in the near future, as the Bureau of Fisheries in Region 02 starts its massive bamboo planting project. The activity falls under the Oplan Sagip Ludong (OSL) project of the agency.

Dr. Ame, who is also chief of the Research Division of the Bureau of Fisheries and Aquatic Resources (BFAR) in Region 02, said that the project is meant as an alternative livelihood source for fishers affected by the implementation of the Bureau’s Administrative Circular 247, which imposes a ‘closed season’ for ludong (Cestraeus sp. or lobed river mullet) fishing from October 1 to November 15 of each year.

63-year old Eupoldo Tiozon and his fellow ludong fishers from Brgy. Nasiping in Gattaran, Cagayan expressed their gratitude for the project. “This project can really help us, more so with the implementation of closed season. We can derive a lot of benefits from bamboo.

Hard bamboo is expensive, while we can also gather bamboo shoots when these plants mature,” Tiozong said. According to Dr. Ame, the decision to venture into bamboo planting is due to the plant’s fast growth, ease of culture, and low production cost. The plant is also a source of food and has high usage in handicrafts and building construction. Bamboo planting can also mitigate the ill effects of climate change such as floods and soil erosion, Ame added.

“This project will focus on those who are really in need. The project shall contribute towards the successful implementation of BAC 247,” BFAR RO2 Regional Director Dr. Jovita Ayson earlier said.

BAC 247, launched by BFAR Director Atty. Asis G. Perez in Lallo, Cagayan in October of last year, was crafted primarily to arrest the rapid decline on the abundance of ludong, a high value fish that is also considered a cultural symbol of Cagayanos. Ludong is a catadromous fish, meaning, it thrives in fresh water but migrates downstream to spawn in marine waters.

Municipalities covered by the bamboo planting project are those encompassed by the ludong spawning run. In Cagayan, these are Aparri, Camalaniugan, Lallo, Gattaran, Sto. Niño, Alcala, and Amulung; Palanan, Tumauini, San Mariano, Jones, Dinapigue in Isabela province; and Maddela, Cabarroguis, and Nagtipunan in Quirino province.