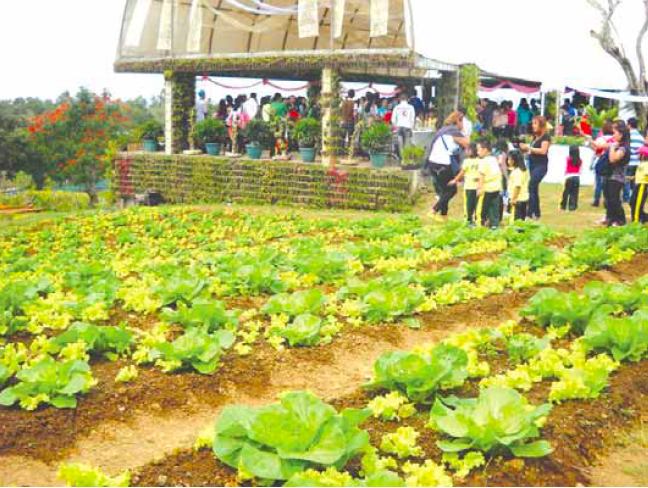 Paradizzo Farm in Mendez, Cavite is one of the five theme parks of the Zoomanity Group, the country’s theme park industry leader that’s part of the Yupangco Group of Companies. It started the year by holding weekend flower, livestock, and vegetable festivals in its facility.

Zoomanity Group president Robert Yupangco led the festivals, which highlighted Paradizoo’s increasing focus on agricultural crops and livestock to complement the llama, camel, miniature horses, ostrich, greyhounds, and Labrador retrievers that are its main attractions. Its farm animals include cattle, goats, pigs, turkey, and geese, with latter fowls freely roaming the farm to visitors’ delight. Thousands of young and old visitors attended the day long fiestas, many of them touring the farm on a cart drawn by an albino carabao.

To assist interested weekend and home gardeners, Paradizoo invited a leading flower-herbs-vegetable seed and crop care company to join the festivals, and ornamental, vegetable, and livestock experts to conduct lectures on the festival’s Saturdays.

Paradizoo’s ornamental plant and vegetable gardens are in about a hectare and a half of its total area of 12 hectares of rolling land. Its farm manager Myra Antipuesto and her assistants give pointers on good farm practices to interested guests. They also encourage the visitors to take advantage of Paradizoo’s “Plant Me Home” offer in which they can select and pick vegetables and flowers from the garden plots to take home.

Fresh lettuce, the farm’s premier produce, is also available for guests to take home, together with cabbage and other leafy veggies, carrots, and radish, as well as pinakbet vegetables like eggplant,
pepper, sitao, and okra. The farm grows lettuce from the lettuce seed market leaders Rijk Zwaan and Condor whose exclusive distributor in the Philippines, ABC, is the company that the Zoomanity Group invited to be part of the Paradizoo festivals.

Most of the lettuce grown by farmers throughout the country today, especially in Benguet and in the Tagaytay-Silang-Alfonso area of Cavite, were bred by Rijk Zwaan, which introduced its first lettuce line for commercial planting by Filipino farmers in August 2007. The Dutch breeder carries more than 1,000 high-quality varieties of about 25 different vegetable crops in its broad product range. According to Antipuesto, Paradizoo Farm is also setting up hydroponics systems for growing lettuce.

Lectures to attendees during the Saturdays of the festival period include those on orchids, bonsai, flower arrangement, basic lettuce growing and hydroponics, and the health benefits of malunggay. Livestock production experts of the University of the Philippines at Los Baños and the Department of Science and Technology’s Philippine Council for Agriculture, Aquatic and Natural Resources Research and Development handled the livestock lectures.

Yupangco said that Paradizoo Farm thought of the festivals to promote food production and sufficiency, especially of nutritious vegetables, and as an additional come-on to visitors at the park, which differs from the Zoomanity Group’s other parks in that it has the least number of the exotic animals that primarily attract guests, especially children.

For instance the Zoobic Safari Adventure Park, situated at Subic Bay Freeport’s Forest Adventure
in Zambales, is a 25-hectare spread featuring exciting lion and tiger safaris. The Park is where
visitors can see, up close, two rare female white lion cubs born in the country in May 2014. The
cubs were from the pair of white lions that were donated to Zoobic Safari by Sheikh Mohammed Bin Rashid Al Maktoum, vice-president and Prime Minister of the United Arab Emirates and ruler of Dubai. There are also full-sized Siberian tigers, some 200 crocodiles, huge pythons and boa constrictors, and iguanas and monitor lizards.

Aside from camels and greyhounds, the Zoocobia Fun Zoo inside Paradise Ranch at the extended Clark Freeport Zone in Pampanga has ostriches, a Palawan bearcat, and an animal barn complete with stalls containing a wide variety of unusual animals, including a Kobe Beef cow from Japan.

Paradise Ranch is a huge reforestation and environment conservation project in which Aeta farmers produce food crops for guests staying at the Ranch’s villas.

Zoocolate Thrills in Loboc, in the island province of Bohol in central Philippines, has ostriches, tigers, and bearcats, while Zoomanity’s Residence Inn at Tagaytay, the first facility that the
Group established, has a mini-zoo with adult and baby tigers, and a large aviary, and features a breathtaking view of the Taal Volcano.

Yupangco related that the idea for Zoomanity was born when his friends from Japan gifted him with a pair of baby tigers. There was no other place to keep the growing animals except at his summer home in Tagaytay, which eventually became the Residence Inn and Mini-Zoo after he began acquiring more exotic animals to showcase there.

“Our Group established these parks as places for entertaining and educating people, and enriching their experience through close encounters and interaction with flora and fauna, as much as possible in their natural habitat,” said Yupangco. “We plan to put up two to three more parks throughout Luzon in the near future. Zoomanity’s advocacy is for our entire country to be one big green park.”