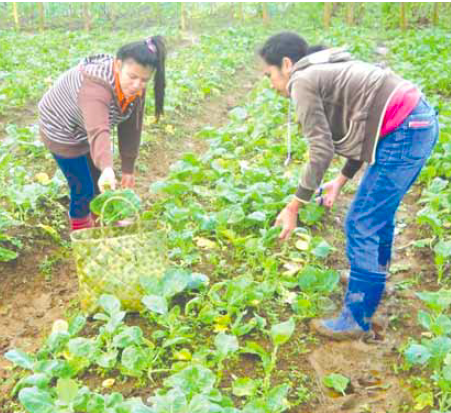 Nutritionists and health experts worldwide, who today are increasingly being listened to, say that brassicas (of the genus Brassica in the Mustard family Brassicaceae) are the most healthfully-beneficial vegetables that people can eat, and that these veggies are nutritional powerhouses packed with vitamins, minerals, antioxidants, and other phytonutrients.

The group includes more types of economically important horticultural crops—40 species—than does any other genus: cabbage, cauliflower, broccoli, kale, collard, Brussels sprouts, kohlrabi (all of these of the B. oleracea species), mustard, turnip, Chinese cabbage, broccoli raab (B. rapa), swede (B. napobrassica), etc.

Josie Tubo, assistant head caretaker at the Kalye Luntian Farm in Alfonso, Cavite tends Russian kale plants in one of the farm’s plots.

The members of the genus may be collectively known either as cabbages or as mustards and are sometimes called cole crops, from the Latin caulis, meaning stem or cabbage. Brassicas are also known as crucifers because the family was formerly called Cruciferae or Crucifer, so-named because its members bear four-part flowers in the shape of a cross. This diverse grouping consists of plants whose leaves (cabbage, Chinese cabbage, kale, collard, mustard), flowers (cauliflower, broccoli, Brussels sprout, broccoli raab, Chinese flowering cabbage), stems (kohlrabi), and roots (turnips, swedes) are eaten.

The most common brassicas in the Philippines are cabbage, cauliflower, broccoli, Chinese cabbage (which includes the various varieties of pechay), and mustard, while less familiar ones include kale, Brussels sprouts, and kohlrabi. Popular in other countries but not grown in ours are collard, broccoli raab, turnips, and swedes. Nutritionists consider broccoli, kale, and collard as the brassica “big stars.”

Similar in some respects, kale and collard are primitive cabbages not far removed from the original non-heading cabbage of old with a prominent stalk.

This kale with crinkled leaves is the third variety grown by Kalye Luntian Farm.

Unlike their more highly developed relatives like head cabbage, cauliflower, and broccoli, they haven’t changed in the last 2,000 or more years but have lasted due to their merits as garden veggies. It’s not certain where they originated—whether in eastern Mediterranean or Asia Minor—because they have been grown for so long and prehistoric traders and migrators had moved them around the globe so much.

Kale or borecole (B. oleracea Acephala Group) has green or purple leaf systems in which the central leaves do not form a head but grow in a loose rosette atop a stem. Closer to wild cabbage than most domesticated forms of vegetables, most kale are coarse, unappealing, undesirably colored, and indigestible. They are either annuals or biennials and are grown from seeds which resemble those of cabbage in size, form, and color.

Kale is similar to broccoli, although with its dark-green leaves, it doesn’t look like broccoli. The word ‘kale’ is Scottish from coles or caulis, terms the Greeks and Romans used for the cabbage-like group of plants. The German kohl is of the same origin. Neither kale nor collard thrive in hot weather.

Until the end of the Middle Ages, kale was one of the most common green vegetables in all of Europe, where it grows naturally during the winter season and where it remains today as a major ingredient in the cuisine of many European nations.

Curly leafed varieties of cabbage already existed along with flatleafed varieties in Greece in the fourth century BC. These forms, referred to by the Romans as Sabellian kale, are considered to be the ancestors of modern kale. One can now differentiate between varieties according to the low, intermediate, or high length of the stem, and the leaf types that come in two forms: smooth, and curly kale, which has crinkly leaves, with the latter the more common of the two. The leaf colors range from light green to green, dark green and violet-green to violet-brown.

The beautiful leaves of the kale plant provide an earthy flavor and more nutritional value for fewer calories than almost any other food, making kale one of the most potent health-promoting vegetables known to man. Nutritionists call it a “superfood,” “nutritional superstar,” “the queen of greens,” and “the new beef,” and say it deserves those titles. Packed with beta carotene, vitamin C, and folate, it’s also one of the richest vegetable sources of calcium and other essential minerals like iron, magnesium and potassium, and dietary fiber. It’s also rich in phytochemicals that help prevent the risk of cataracts and age-related macular degeneration, a major cause of vision loss. As with broccoli and other brassicas, kale contains sulforaphane (particularly when chopped or minced), a chemical with potent anti-cancer properties.

Called the “Asian Wonder Green,” kai-lan’s flavor is like that of broccoli but noticeably stronger, more bitter, and a bit sweeter, and is comparable to that of broccoli raab. Kai-lan, which literally means “mustard orchid,” is widely eaten in Chinese—especially Cantonese—cuisine, typically chopped, in stir-fry dishes. Unlike broccoli, where only the flowering parts are normally eaten, kai-lan leaves and stems are eaten and are also common in Thai, Vietnamese, and Burmese cuisines.

The Portuguese introduced kai-lan to China centuries ago during that European nation’s early days of expansion and colonization, as it’s a relative of Portuguese cabbage. Kai-lan is called Chinese kale but it doesn’t taste at all like kale. Regular kale is tough and needs to be cut to size for eating. It can be terrible if not cooked well (a reason for the growing popularity of baked kale chips). Kai-lan is subtle and sweetly succulent. It could be like bok choy (a Chinese cabbage variety) without the crisp, water-filled stems.

Crunchy when eaten raw and tender when cooked, kai-lan can be steamed whole and tossed with fermented black bean sauce.

An article in MindBodyGreen.com lists the 10 top benefits of eating kale:

1. Kale is low in calories, high in fiber, and has zero fat. One cup of kale has only 36 calories, five grams of fiber, and zero grams of fat. It’s great for aiding digestion and elimination. It’s also filled with so many nutrients, vitamins, folate, and magnesium as well as other nutrients (listed below).

2. Kale is high in iron. Per calorie, kale has more iron than beef. Essential for good health, iron is for the formation of hemoglobin and enzymes which transport oxygen to various parts of the body, cell growth, proper liver function, and more.

4. Kale is filled with powerful antioxidants. Antioxidants, such as carotenoids and flavonoids, help protect against various cancers.

Within the carotenoids, lutein and beta-carotene are standout antioxidants. Research has followed the passage of these two carotenoids in kale from the human digestive tract up into the blood stream and shown the ability of kale to raise the blood levels of these carotenoids. This finding is important. Without the sufficient intake of antioxidants, our oxygen metabolism can become compromised, and we can experience a metabolic problem called “oxidative stress.” Lutein and beta-carotene are key nutrients in protecting our body from oxidative stress and health problems related to it.

Like most of its fellow brassicas, kale has been studied more extensively in relationship to cancer than any other health condition. This research focus is because kale’s nutrient richness stands out in three particular areas: (1) antioxidant nutrients, (2) anti-inflammatory nutrients, and (3) anti-cancer nutrients in the form of glucosinolates. Kale’s risk-lowering benefits for cancer have recently been extended to at least five different types of cancer. These are cancer of the bladder, breast, colon, ovary, and prostate. Isothiocyanates (ITCs) made from glucosinolates in kale play a primary role in achieving the risk-lowering benefits.

5. Kale is a great anti-inflammatory food. One cup of kale is filled with 10 percent of the recommended daily allowance of omega-3 fatty acids, which help fight against arthritis, asthma, and auto-immune disorders.

Researchers have identified over 45 different flavonoids in kale, which combine both antioxidant and anti-inflammatory benefits to give it a leading dietary role in avoiding chronic inflammation and oxidative stress, which are risk factors for the development of cancer.

Research shows exactly how this support process works. Our liver uses cholesterol as a basic building block to produce bile acids, specialized molecules that aid in the digestion and absorption of fat through a process called emulsification. These molecules are typically stored in fluid form in our gall bladder and when we eat a fat-containing meal, they get released into the intestine where they help ready the fat for interaction with enzymes and eventual absorption into the body.

Eating kale binds the fiber-related nutrients in it with some of the bile acids in the intestine in such a way that they simply stay inside the intestine and pass out of our body in a bowel movement, instead of getting absorbed along with the fat they have emulsified. When this happens, our liver needs to replace the lost bile acids by drawing upon our existing supply of cholesterol. As a result, our cholesterol level drops.

7. Kale is high in Vitamin A. Vitamin A is great for our vision and our skin as well as helping prevent lung and oral cavity cancers.

8. Kale is high in Vitamin C. This is very helpful for our immune system, metabolism, and hydration. Vitamin C also helps to maintain cartilage and joint flexibility.

9. Kale is high in calcium. Per calorie, kale has more calcium than milk, which aids in preventing bone loss, preventing osteoporosis, and maintaining a healthy metabolism

10. Kale is a great detox food. Kale is filled with fiber and sulfur, both great for detoxifying our body and keeping our liver healthy.

To get the most benefits from kale and the other brassicas, choose organically grown varieties because their phytonutrient content is higher than that of conventionally-grown plants. Cook them by steaming lightly to retain the most phytonutrients and to maximize their availability to our body, or by stir-frying or
micro-waving.

Two farms, Kalye Luntian in Alfonso, Cavite, and Costales Nature Farms in Majayjay, Laguna grow kale and Chinese kale, respectively. The latter, a certified organic farm, produces fresh kai-lan leaves in the open or as rotation crop in greenhouses for two buyers. One is the leading fresh agri-produce consolidator in the country which distributes kai-lan to the supermarket chains under its own brand. The other is the Philippines’ number one wellness store chain exclusively selling organic free-range chicken meat, eggs, pork, and vegetables, which markets kai-lan as a Costales product with the “I Love Organic” label.

Del Rosario shows how Chinese kale leaves are selected for harvest and cut. Two leaves of this Chinese kale plant are harvestable.

The workers transplant the seedlings when these are two to three weeks old, spacing these at 30 centimeters (cm) in the three rows and 40 cm between rows on the raised plots, resulting in a plant population of 25 per square meter (sq. m.). They apply a combination of fertilizers at the rate of three kilograms per sq. m. as basal application. Fertigation through the drip lines is with special water-soluble Peters formulations. For disease prevention, the workers use Bt and effective microorganism sprays and Nordox. Leaves can begin to be harvested 60 days after transplanting and picked two times a week for up to seven months thereafter.

This appeared as ‘”Superfood” and Two Farms in Calabarzon’ in Agriculture Monthly’s March 2015 issue.

Credit to the Unbankable and the Underserved