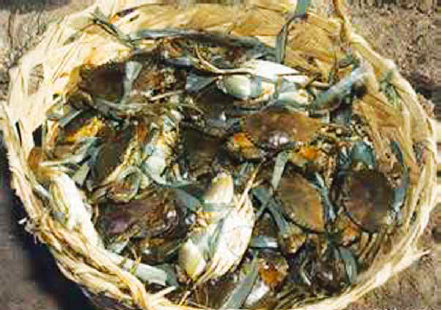 Harvest of mud crabs from aquasilviculture. (Photo courtesy of www.tateh.com)

An idea to use mangroves as a place to grow mud crabs.

Mangroves are coastal forests consisting of shrubs and trees that are known as halophytes – plants that can thrive in brackish to salty waters of estuaries (areas where rivers meet the sea). Serving as “the buffer zones between land and sea,” mangrove forests provide not only protection against strong winds and waves but also life support to a myriad of organisms, including fish, crustaceans, and mollusks, in mudflats and intertidal areas.

As one of the most productive ecosystems in our planet, mangroves are estimated to contribute US$ 186 million per year of goods and services worldwide. By producing about 3.65 tons of litter (decaying leaves) per hectare per year, a good stand of mangrove plants can produce more than 1 ton of fish in a year. Mangroves also contribute to the production of fish and other food species in sea grass meadows and coral reefs.

A pen for aquasilviculture in a mangrove.

Through photosynthesis, mangroves are capable of sequestering (storing) 1,000 tons of carbon dioxide per hectare. Like forests on land, mangroves can help mitigate Global Warming which is caused by the trapping of “greenhouse gases” like carbon dioxide in the atmosphere. The value of mangroves in the Philippines has been estimated to be US$ 600 per hectare or about Php26,400.

In the Philippines, only about 138,000 hectares of virgin mangroves remain today of about 400,000 hectares in the early 1900s due to conversion into fishponds, overexploitation, and human settlement development. Along with reforestation of over-logged mangroves and the rehabilitation of abandoned brackish water ponds back into mangroves is the growing of high-value food species like the mud crab (Scylla serrata) in mangroves in an integrated system known as aquasilviculture.

Construction of a pen for mud crab culture in a mangrove.

In aquasilviculture (a term coined from aquaculture, the farming of aquatic species, and silviculture, the growing of trees)—which is also practiced in Indonesia, Malaysia, Vietnam, and China—the mud crab and other high-value species like the mangrove snapper are grown in enclosed areas like pens in mangroves without clearing the trees.

The Bureau of Fisheries and Aquatic Resources in the Cagayan Valley (Region 2) in cooperation with the Cagayan State University in Aparri, Cagayan and Santeh Feeds Corp. conducted field trials on aquasilviculture in Sta. Teresita, Cagayan. Juveniles of the mud crab weighing 15 grams on the average were stocked in a 1,000 square meter pen in a mangrove area at one per square meter. With feeding of commercial formulated feeds, the crabs grew to an average weight of 350 grams each after 3 months of culture and had a survival of 90%. The total amount of feed consumed and feed conversion were 300 kilos and 0.95, respectively.

Harvest of mud crabs from aquasilviculture. (Photo courtesy of www.tateh.com)

The aquasilviculture of the mud crab was also conducted in Barangays Manalo and Tagbarros in Puerto Princesa, Palawan by cooperators of the Southeast Asian Fisheries Development Center’s Aquaculture Department using fenced off mangrove areas. Mud crab juveniles weighing 30 to 40 grams each were stocked in the pens at 5,000 to 10,000 per hectare.

With feeding, 600 kilos of market-size crabs were harvested per hectare after 3 months of culture with a survival rate of 65 to 70%. The culture system had an initial investment of Php200,000 per hectare, return of investment (ROI) rate of 44%, and payback period of 2.27 years.

Compared to growing the mud crab in ponds, aquasilviculture requires less investment for construction and operation costs while protecting mangroves.