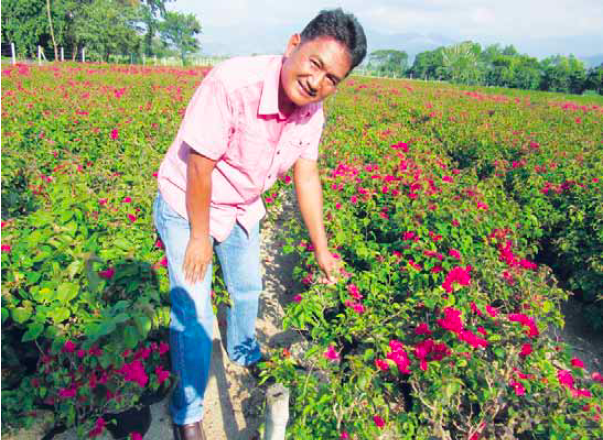 John Teodoro and his 60,000 flowering bougainvillea.

The bougainvillea king is not found in Bay, Laguna, where many landscapers in Metro Manila source their requirements for their landscaping projects. Rather, he is found in Brgy. Manalpac in Solsona, Ilocos Norte.

Considered the Bougainvillea King is John Teodoro, currently the general manager of the Ilocos Norte Water District, who nonetheless finds time to manage his own farm projects. At any one time, he has 60,000 blooming bougainvilleas in his one-hectare nursery. We have visited other nurseries in Laguna, Davao, Cebu, Iloilo, and elsewhere, but no single nurseryman propagates as many bougainvilleas as John.

John does not propagate the fancy or rare varieties that collectors usually look for. What he does is to multiply the floriferous variety with red flowers. His main target market is the provincial government, which has a program of planting flowering plants along the highways. Bougainvillea is one such plant that is highly suitable for that purpose.

John Teodoro and his 60,000 flowering bougainvillea.

The provincial government is not the only buyer, though. There are private landscapers not only in Ilocos Norte but also from other provinces who buy his flowering plants at Php75 apiece. One landscaper who recently bought 900 pieces was John Agbigay from Batac City.

While John is propagating bougainvilleas for commercial purposes, he does not keep to himself the technique of multiplying this flowering ornamental. In fact, he often demonstrates to women’s groups who visit his farm how to multiply bougainvillea. And he also tells them how they can make money from it.

Aside from bougainvilleas, he propagates other plants in big numbers, albeit not as many as bougainvillea. He is probably the only propagator who currently has 3,000 seedlings of Palawan Cherry, an indigenous species that is prized for its beautiful flowers.

A close up of John Teodoro’s Palawan cherry
seedlings.

He said that Gov. Imee Marcos asked him one time if he had Palawan Cherry for use in a beautification project. He had none. That gave him, however, the idea of ordering some seeds from Jesus Romasanta, general manager of the Puerto Princesa Water District. Today, he has no less than 3,000 seedlings available. He is not yet releasing any now because Ilocos Norte might need it for its own beautification program.

Propagating mahogany is another pet project of John. He is currently preparing 100,000 black plastic bags for sowing mahogany seeds. He also has in stock at least 30,000 seedlings that are about 4 feet tall, ready for planting. And there are also large planting materials that are at least eight feet tall.

In previous years, he sold thousands of them to a government agency for reforesting purposes. But there are also private landowners who are buying their requirements from him. He is also encouraging even the smallholder farmers to plant forest trees. In fact, if the farmer needs only 20 seedlings or thereabouts, he will give the seedlings for free.

If the seedlings are overgrown and there are no buyers, John will plant them in his own property or somewhere else.

John has also germinated thousands of duhat seeds. He thought of this because this is one tree that can be planted in the bare mountains. If they eventually come to fruiting stage, their fruits can be made into duhat wine. He has also germinated a lot of McArthur palms, which are among the favorites of landscapers.

Water is plentiful in Solsona, particularly where John has his farms. That is why he has his own fishponds. One is where he has his nursery. There, he grows a lot of orange or colored tilapia which are sometimes allowed to grow to more than a kilo in size. In fact, there are some that weigh three kilos.

John’s tilapia is not for commercial purposes. Most of them are served to visiting friends or for home consumption. When his three children were still studying, he used to harvest his fish for sale in order to pay for his children’s school expenses. Now that that they are all professionals and are working, he does not have to sell his fish anymore.

In front of his house, there are two small ponds that are fed by a spring from the mountain. Here, he grows his favorite giant gourami. A bigger number of his gourami, however, is grown in one pond near his mango plantation. Two other ponds over there are used for growing colored and gray tilapias.

Unlike most other fishponds, John constructed his ponds differently. Instead of excavating the soil, he built a dike around them. He volunteered to excavate the pond of a neighbor with manual workers so he could get enough filling materials for his dikes. The neighbor was of course happy because he had his own pond built practically for free.

With a thick growth of water hyacinth in one of his ponds. That’s where his giant gourami breeders seek cover.

John says that he gets some farming ideas from Agriculture Magazine, which is why he is also growing a lot of fruit trees, vegetables, and herbs in containers around his mango plantation and fishponds such as sweet balimbing, lemon, fruiting tomatoes, eggplant, ginger and many more. In recycled black plastic bags, he has planted a lot of native onions.

John considers himself a self-made man. When he was a small boy, he spent his young years in Laoag City with a relative who was better off. At that time he sold pan de sal in the morning and also cleaned the vehicle of the relative. Through hard work, he was able to finish a course in civil engineering, which landed him in his current executive position in government.