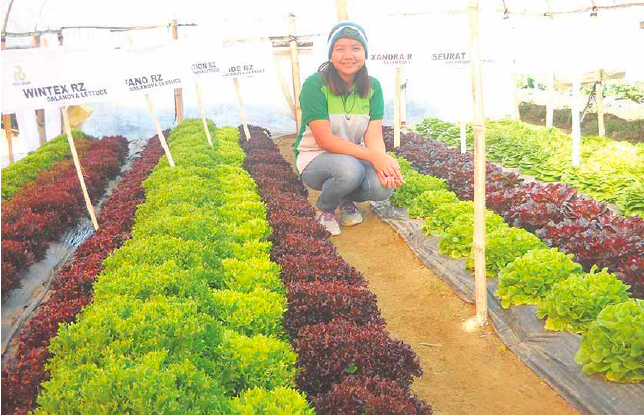 It was the highest attendance since the company began showcasing vegetable, culinary herb, and flower varieties grown to test cultural characteristics, pest and disease tolerance or resistance, and yield potentials from the quality seeds it has marketed for 31 years.

As in previous years, farmers from the Ilocos provinces, Cagayan Valley, Central Luzon, CaLaBaRzon (Region IV-A or Cavite, Laguna, Batangas, Rizal, and Quezon), and Bicol comprised the biggest groups that attended the open house. Many of the farmers come to the Tayug facility to get firsthand information on the new varieties and technologies that ABC will later introduce throughout the country for more profitable croppings. The farmers took turns touring the farm group by group, guided by the ABC agronomists and Market Development technologists assigned to their respective areas.

A number of agri-entrepreneurs also came to look at new crops that they can produce or supply to institutional buyers or end users such as supermarket and restaurant chains and hotels. The ABC Technical Services Department staff, headed by manager Reinald del Valle, conducted lectures for interested visitors after lunch.

Del Valle presented Klasmann Peat-based Substrate, the highest-quality seed-growing medium available in the country today for commercial ornamental and vegetable producers. The latter use it as a potting medium while the former use it in their seedling trays and small pots to ensure high seed germination and seedling survival rates. The product enables plants to absorb and retain moisture in the most beneficial way, and allows for good aeration for their root systems. It also contains precise amounts of nutrients and trace elements needed by the plants, has adapted soil pH values, and is disease-, pest-, and weed-free. Technologists Michael Castillo and Rae Barbosa lectured on “Potected Cultivation” and “Crop Care Essentials,” respectively.

The open house featured a selling section for seeds, fresh vegetables and culinary herb and flowering plant seedlings, which many of the visitors bought to take home.

A Farm for Innovation

ABC opened the facility in 1996 as a breeding and research and development (R&D) venue for pinakbet vegetables, later gradually adding other varieties, especially those of high value that could be grown in lowland areas of the country. The farm is equipped with a complete line of farm machinery for crop production; seed extraction, cleaning and processing equipment; and a seed quality testing laboratory. It’s where the company began developing vegetable varieties to suit local growing conditions, including breeding seeds for high yield, resistance to local pests, and diseases, and selecting varieties with superior adaptability to tropical conditions. These are the seeds that ABC markets under its Condor Brand.

ABC technologist and Highland Crops Research Center in-charge Domel Mangayao (left) lectures to the visitors
at the facility’s open house at the Benguet State University on the Brassica vegetables showcased there.

It was on this farm in 2002 that ABC bred the country’s first commercial hybrid Japanese sweet corn. The company’s researchers developed the corn’s sweetness from the recessive shrunken gene, making it necessary to plant the variety in isolation from other corn cultivars to avoid contamination and loss of sweetness. This is done by space isolation (at least 200 meters) or time isolation (at least two weeks before or after planting another type of corn). The facility’s personnel also engage in research on farming systems, crop management, plant nutrition, and pest management.

For many of the attendees, the open house served as a happy reunion of sorts with ABC personnel whom they have come to depend on for assistance in their selection of crops to grow as well as in the culture and care of their vegetables, herbs, and flowers.

Senator Cynthia Villar, who chairs the Senate Committee on Agriculture and Food, was the guest of honor and keynote speaker. After cutting the ceremonial ribbon to formally open the three-day event with Pangasinan Sixth District Representative Marlyn Primicias-Agabas, she led the tour of Speaking to the attendees in the program held at the ABC R&D compound, Villar congratulated and thanked the company for its contributions to the advancement of farming in the country, especially in introducing heat-tolerant varieties of chopsuey vegetables that can be grown by lowland farmers. She said that she will have the manager of her farm in Las Piñas City add cabbage, cauliflower, broccoli, and Chinese cabbage to the pinakbet veggies grown there at present, encouraging city residents—especially the youth—to plant
vegetables for food sufficiency and nutrition.

Pangasinan Sixth District Board member Alfonso Bince Jr., Burgos, Ilocos Sur mayor Riolita Balvalan and Bongabon, Nueva Ecija Municipal Agriculturist Luchie Cena were among the special guests, which also included representatives from other local government units of Pangasinan, key personnel of DA research and extension facilities in the province and other regions, and officials, faculty members, and students of agricultural universities and colleges.

As it has done in recent years, ABC also held an open house at its 1,000-square meter Highland Crops Research and Demonstration Center at the Benguet State University R&D field at Barangay Balili in La Trinidad town. The company’s Technical Services Department grew about 100 vegetable varieties to showcase during the open house, which was attended by some 250 farmers and horticulture students.

The varieties included 45 Salanova, Cos or Romaine, Iceberg, Lollo Rosa, Lollo Bionda, and Batavia lettuces. Except for the 12 Salanova varieties—reputedly the highest-priced lettuce, grown separately in a bamboo-and-plastic rain shelter—all the other vegetables were under tunnel shelters.

These were of great interest to the attendees who are into greenhouse production of high-value veggies, such as Junie Calawa of Bauko, Mt. Province who has more than a hectare of greenhouses on his farm and is the DA’s Gawad Saka Regional Awardee in the High-Value Crops Category for 2012-2013. Calawa’s main crop is Rijk Zwaan lettuce. Tarcilo Balusdan, who manages several greenhouses with an aggregate floor area of 6,000 square meters in different sitios of Brgy. Banangan in Sablan, Benguet that grow about 17,000 hybrid sweet pepper plants also attended the open house.

Growing the Mud Crab in Mangroves