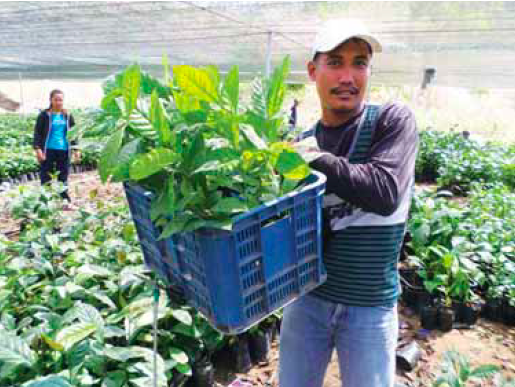 Great things are happening in the agricultural scene of Ilocos Norte. For one, Piddig town is poised to become a major producer of organic coffee, both of the premium Arabica and the lowland varieties.

The coffee project, which is spearheaded by Mayor Eddie Guillen, 50, may be considered a most ambitious agricultural undertaking not only in the province but in the whole country.

Imagine, the vision is to grow organic Arabica coffee on 500 hectares in the upland area called Lammin, where pine trees grow like in Benguet, and 1,000 hectares to the Robusta, Liberica, and Elcelsa varieties in the lowland barangays of Calambeg, Maruaya, Gayamat, Dupitac, and Estancia.

Can that project succeed? you might ask. Well, although the idea was conceived three years ago, and the actual start of propagation was in early 2014, the prospects are bright. Some 500 farm families are currently involved in the project. And because of the unique nature of the scheme, it is a win-win situation not only for the farm families but also for the municipal government and the economy as a whole.

The seedlings that number about 1.5 million are already growing very well in three big nurseries. And did you know that the workers are already getting paid for their labor even if the coffee trees are not yet planted in the ground?

This is how the scheme works, according to Mayor Guillen. Each farmer is allotted two hectares to grow coffee. In the common nurseries (there are three), which are strong netted greenhouses, each farmer has to produce 1,600 seedlings under the guidance of a technician. Each ready-to-plant seedling is valued at Php25. That means Php40,000 for the 1,600 seedlings nurtured over a period of 9 months. From the first week of working, the farmer can already draw weekly from the Php40,000 a take home pay of Php1,125.

At the time of our interview, the farmers were already clearing their areas. And they are also paid for their work at Php2,000 per hectare. For digging the holes for planting this coming May, they are paid Php4 per hole. And they have been taught to produce vermicompost for fertilizing the seedlings when these are planted in the ground. They will be paid Php5 for every kilo of vermicompost that they will supply per hole. That’s Php8,000 worth of organic fertilizer.

Where does the money for paying the farmers come from? There’s a Php70 million grant from the National Greening Program (NGP) of the Department of Environment and Natural Resources (DENR) for the production of the seedlings, preparing the land, and other expenses. But that’s getting ahead of the real story. How did the coffee project come about in the first place?

Birth of the Idea

As part of the program of Governor Imee Marcos, she brought the Ilocos Norte mayors to visit farm projects in Vietnam and Indonesia in 2011. It was during those trips that Mayor Guillen thought of growing coffee in his town. After all, there were unutilized public lands available in Piddig that were suitable for coffee production.

For Arabica coffee production, Brgy. Lammin is perfect. Its climate is like that of Benguet, where pine trees thrive. Mayor Guillen also knew that there should be no problem marketing the coffee harvest. After all, at present, the Philippines imports about 80 percent of its coffee requirements. The thing is to produce quality coffee at a competitive price. And he thought of producing organic coffee that would fetch a higher price than the ordinary kind. Right away, Mayor Guillen saw the prospects of coffee production as a means to give his constituents a sustainable source of income. But that did not come as easily as you might think. He had to convince Sec. Ramon Paje to undertake coffee planting in areas covered by the DENR.

Mayor Guillen recalls that the DENR secretary did not see the logic of using coffee to reforest the underutilized hills and mountains then, and neither did he consider coffee as a tree for reforestation. Under the DENR’s National Greening Program, only forest trees are considered for planting. And after three years, the DENR leaves the area to the community; the responsibility of caring for the trees becomes theirs.

After a long period of discussions, the DENR secretary finally saw the wisdom of the project and allocated Php70 million, released in three tranches, to fund the production of seedlings, land preparation, and related activities.

After having convinced the DENR boss, it was easier to convince other agencies to support the project. Mayor Guillen approached the Department of Agriculture (DA) next. This time, it was for the construction of farm-to-market roads. Sec. Proceso Alcala, for a start, readily gave R98 million in November 2013 for road construction.

The Department of Public Works and Highways (DPWH) is contributing Php300 million, not for roads but for a dam that will collect three million cubic meters of rainwater, which will be used as source of irrigation for the coffee plantations in the lowlands. It will also serve as part of the water management technologies that will prevent flooding in the lowlands. Earlier, the DPWH through Sec. Rogelio Singson released Php32 million for a small water impounding project (SWIP) in Piddig.

The Department of Social Welfare and Development has also thrown its support. The families that are beneficiaries of the 4Ps program (those below the poverty line) are being supported with an allocation of Php3.5 million last year. The 700 beneficiary families were given Php5,000 each as starting capital for vermicompost production. Two thousand pesos was for the purchase of earthworms while the Php,000 was for vermi-beds. The organic fertilizer produced is purchased by the Piddig Farmers Cooperative for the coffee project as well as for other crops.

Families that are not covered by the 4Ps program are being taken care of by the Department of Labor and Employment. The agency has allocated R1 million for non-4Ps beneficiaries who work on the coffee project. They can clear fields, plant kakawate that will serve as nurse trees of coffee in the lowlands,
and the like.

Mayor Guillen and a companion show their vermiculture project, which serves as a training center for the farmers to produce their own organic fertilizer.

Next is the establishment of on-farm road and irrigation systems. The project area requires about 100 kilometers of roads vital for the transport of seedlings and movement of workers for clearing, lay-outing, holing, and planting. The roads also serve as firelines and for transport of the produce to market.

A memorandum of agreement (MOA) has been entered into between the Benguet State University and LGU Piddig for Arabica seedlings. Project technical assistants and consultants will be provided by the Cavite State University for the low elevation coffee varieties (Robusta, Excelsa, and Liberica).

The 1,130-hectare lowland area will be divided into blocks of 300 hectares with 150 farmers and each block served by a coffee farm technician. There will be six blocks in all: 4 in the lowland area, and 2 in the highland area.

The coffee project is estimated to produce 2,000 tons of coffee at full development valued at more than Php175 million a year. This could save the Philippines some US$ 4 million that would otherwise be used to import coffee.

About 2,000-full-time jobs (about two per family) are expected to be created, generating total household incomes of at least R100 million a year at full development. The multiplier effect will be around Php400 million a year to the Ilocos Norte economy.

The Piddig Farmers’ Cooperative will play an important role in managing and marketing the coffee growers’ production. When harvest time comes 27 months after seedling stage, the beans will be sold through the cooperative. Ninety percent of the sales will be retained by the farmer while the co-op will get 5 percent as management fee. The other 5 percent will go to the coffers of the municipality as royalties.

Mayor Eddie Guillen and Ariel Tejada hold issues of Agriculture
Magazine and Bannawag, both published by the Manila Bulletin.
These are a source of information for the municipality’s radio program.

Mayor Guillen sees no major problem in marketing the coffee beans. For one, the Arabica beans that will be harvested have already been contracted by the Rocky Mountain Arabica Company of Canada. On the other hand, the lowland varieties could be marketed locally without much problem.

One advantage of the cooperative, according to Mayor Guillen, is that it can obtain soft loan from the LandBank using the Agricultural Guaranty Fund Pool (AGFP) as collateral. He explained that under the Agri-Agra Law (RA 1000), banks are obliged to lend 25% of their loan portfolio to agricultural projects. Those who fail to comply with the law have to pay a penalty equivalent to 0.5 percent of their non-compliance or under-compliance which is computed on a quarterly basis. The penalties have grown to a big amount and is sitting in some government lending institutions like the LandBank. Now, cooperatives can borrow from the LandBank with AGFP guaranteeing 85 percent of the loan.

Mayor Guillen also pays attention to other products in his town. Through his initiative, he was able to get a grant of Php16 million from the Department of Agriculture for a modern rice mill. The rice mill is not only valuable for efficient quality milling, it is also valued for the rice hull byproduct.

Mayor Guillen and flue-cured tobacco. Fluecuring tobacco uses a lot of wood–about 25 cubic meters of wood is needed to flue-cure the harvest from one hectare, and this contributes to deforestation.

Rice hull is now used as fuel for tobacco flue-curing barns in place of wood. Rice hull used in flue-curing is not only valuable for the energy generated. The carbonized rice hull can be combined with organic fertilizer to improve the fertility of farms.

The use of rice hull for fuel also helps save the forest. It is estimated that to flue-cure tobacco leaves from one hectare, 25 cubic meters of fuel wood is required. There you are. Better times are in store for the farmers of Piddig, thanks to their super active mayor.