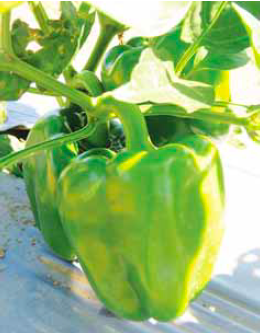 RAMGO showcased its outstanding varieties in the inauguration of its 3rd research station in Bongabon, Nueva Ecija last January 28, 2015.

Visitors and delegates were divided by Ramgo’s farm technicians and field researchers into smaller groups, who were then guided them to the research station’s 2.7 hectare (ha) field in which there were 229 ongoing variety trials. These trials are essential in order to choose the best varieties for the company to offer to farming communities.

Tomato producers might consider the Agatona variety, which is resistant to Tomato Yellow-Leaf Curl Virus (TYLCV). Agatona can be harvested within 50-55 days after transplanting (DAT). Also, it has a relatively longer life span, extending up to two and a half months after the first harvesting, whose yield ranges from 25-35 tons/ha.

Radish growers may find the Valiant variety to be a good choice since it’s an early maturing variety that can be harvested in 40-50 days after sowing. It has vigorous plant growth from the vegetative to the harvesting stage. Valiant also has wide season adaptability and has good tolerance to soft rot. Upon harvesting, it also has good root uniformity and the crop’s estimated yield ranges from 20-26 tons/ha.

For ampalaya producers whose problems are fruit cracking, pamamarako (the inability to develop fruits), and stress of their produce, Verde Buenas F1 is the answer. It is a high-yielding ampalaya hybrid which is early maturing at 30-40 DAT. Harvesting can last up to 2 months and has an estimated yield of 20-25 tons/ ha. It has cylindrical, shiny, light green fruits with smooth ridges.

This variety performs best during the cool and hot-wet season. Another variety is Megaton F1, which is also an early maturing variety of ampalaya shaped like a bullet and with rounded base fruits. Its flesh is firm and tolerant to bacterial wilt. This variety yields from 30-35 tons/ha.

Those with eggplant crops may want to consider the Sikat F1 variety, since it is tolerant to heat and bacterial wilt. Sikat is high yielding (30-35 tons/ha) and extra early maturing (45 DAT); this variety of eggplant has cylindrical fruits. Its fruits have shiny dark purple skin and a purplish-green calyx that makes it appealing to the market. These are just some of the Ramgo seeds which have already been tested and are now commercially available.

The rest of the varieties on trial are still coded for fair evaluation of their performances. Varietal screening also takes place in other research stations in the highlands of Bugias, Benguet, and in South Cotabato. “We look for the best varieties then offer these to the farmers to give them alternatives to planting traditional varieties,” said Albino Aquino, national research and development manager of Ramgo.

According to Aquino, varietal screening is done by conducting trials of the seeds from various suppliers. After evaluation, high-performing varieties will be tested on its top-producing locations such as the eggplant varieties tested in Villasis, Pangasinan and parts of Quezon. This confirmatory trial is conducted to make sure that the varieties are first-rate before being made commercially available.

Technicians in the research stations also develop packages of technologies (POTs) for the crops. They find the best way to lessen production costs and maximize the profits of the farmers. Also, they perform studies on organic farming and look for alternative solutions to insect pests.

Aquino added that they are conducting several research studies to help farmers, not only in guiding them as to what variety to plant, but also what cultural practices they should use in order to receive a good harvest. In order to continually address the problems and needs of farming communities, Dr. Aquino together with Dr. Romeo Opeña conducts plant breeding to produce higher yielding, early maturing, and pest- and disease-resistant varieties.

As one of the farmer said during the field tour, “What we learned in farming is that you should choose the best variety to plant.” Varietal selection is indeed vital to the profitability of the farm business, so farmers should choose seeds that have been tried and tested.

BFAR Program to Target ‘Poorest of the Poor’