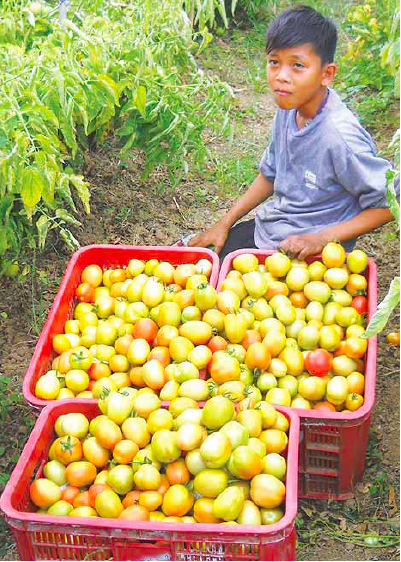 Dan Lacanilao poses with the Fantastic F1 fruits he has picked in the field of Juanito Manalastas.

Pinakbet vegetable farmers in Central Luzon are now planting new hybrid tomato varieties that bear fruits bigger than those of the cultivars they’ve grown for quite some time and possess excellent shipping and shelf life qualities. The new tomatoes also have outstanding fruit characteristics.

One of those new varieties is Fantastic F1, developed by the Sakata Seed Corporation of Japan, one of the world’s top 10 seed companies, which celebrated its centennial in 2013. Sakata is recognized as a global leader in the development of innovative vegetable and flower genetics. It developed the world’s first hybrid cabbage—the first F1 Brassica vegetable—in 1940. Today, it’s the leading breeder of Brassicas worldwide.

Juanito Manalastas has to lift the foliage of his Fantastic F1 plants to be able to see their fruits in his field; often, the plants there collapse on their trellises because of the number of fruits and their weight.

Sakata maintains two breeding stations, one each for warm and cool climates, and a large network of research stations around the globe. Exporting to 130 countries, the company’s broccoli and pansies—the world’s leading bedding flower—maintain an overwhelming share of the global market and attest to its position as a formidable leader in the seed industry. Over the years, it has launched outstanding varieties for many crops, including pepper, onion, carrot, tomato, cabbage, and watermelon. Allied Botanical Corporation (ABC) is the exclusive distributor of Sakata seeds in the Philippines and began carrying the Sakata brand of flower, vegetable, watermelon, and herb seeds in 1989.

Fantastic F1 is Sakata’s first tomato for Filipino farmers that’s neither of the Cherry nor Beefsteak types. A widely adaptable and highly prolific bearer, Fantastic F1 yields heavy fruits weighing 65 to 75 grams each. No tomato variety can beat it when it comes to the keeping and shipping qualities of its fruits. In addition, the variety has good tolerance to Bacterial Leaf Blight and Tomato Yellow Leaf Curl Virus, two widespread and destructive diseases of tomato plants in the country.

In Barangay Magumbali in Candaba, Pampanga, agri-supply store owners Rolando and Jennyfair Aga set off the shift to Fantastic F1 when they began carrying seeds and seedlings of the Japanese-bred tomato. ABC Market Development technologist for Bulacan, Pampanga, and Bataan Gerald Cortez conducted a technology demonstration planting of the new variety in the couple’s farm, the results of which farmers in Magumbali and its neighbor barangays saw.

The Agas and other farmers saw how the Fantastic F1 plants grew and fruited so vigorously that the trellises could not hold them. “Fantastic has the characteristic of hiding its fruits under its foliage, unlike other varieties that show off their fruits,” says Rolando Aga, who started their agri-supply store four years ago and began producing ready-to-plant seedlings just the other year—at the behest of farmers who did not grow their own seedlings—in rain-protected nurseries during the wet months of the year. “As a result, when the many fruits of Fantastic begin maturing, their size and weight cause the plants to collapse.”

Dan Lacanilao poses with the Fantastic F1 fruits he has picked in the field of Juanito Manalastas.

The Agas have begun to sell both seeds and seedlings of Fantastic at a 50-50 ratio. They have about 500 square meters of bamboo-and-plastic rain shelters in their compound for growing the seedlings in, and have the help of Rolando’s brother-in-law Mike de Lara, who is the husband of Aga’s sister Sheryl. She helps tend the agri-supply store. The Agas also maintain a branch in Arayat town.

“For customers who order and have to follow a definite transplanting schedule, we use Klasmann Peatbased Substrate as a seedling growing medium in order to deliver on time,” says Rolando Aga. “If not, we use a mix of only one part Klasmann and three parts soil and coconut coir dust so the seedlings don’t grow too fast. We have seedling buyers not only from Central Luzon but also from Ilocos and Cagayan Valley.”

Two of the first farmers in Magumbali to plant Fantastic F1 are Juanito Manalastas and Ronald de la Cruz. Manalastas has about a hectare of land but opted to plant 4,000 seedlings in the portion of his field where he knew the soil is not as acidic as that in the rest of his land.

“I’ve been treating it with lime for a couple of seasons now but I don’t know why the acidity is still high,” says Manalastas. “I also planted Fantastic there but it’s not doing as well as the 4,000 I planted separately. I’m not sure if that portion will give me enough profit after harvest.”

His planting distance on his 122-centimeter (cm)-wide and 100-meter long raised plots mulched with plastic film and with 80-cm spaces between the plots as irrigation trenches was 40 cm. He outplanted 22-day-old seedlings that he grew in seedbeds. He fertilized the transplants with calcium nitrate and a little urea seven days after transplanting (DAT) them.

At 14 DAT and at weekly intervals from then on, he side-dressed with 16-16-16 and urea. He watered the plants every three days by flooding the trenches between the raised plots, sourcing water from a shallow tube well that easily draws from Central Luzon Region’s abundant aquifers (which particularly benefit farmers in the provinces of Bulacan and Pampanga).

“My plants were so heavy with fruit that they collapsed from their trellises,” says Manalastas. “I was surprised because you cannot see that a plant is full of fruits that it hides under its foliage. As the fruits matured, their weight dragged the plants down from their trellis.”

All of the yellow and yellow-green fruits picked were so sturdy, these still had their stalks with their old sepals attached, from the stage when these were still flowers. “Even if picked when already red, the stalks and sepals are not easily detached and the fruits remain hard,” said Manalastas. “That just shows how strong Fantastic fruits really are.”

Aga attests that it’s not only the fruits that are very strong but also the Fantastic F1 plants themselves. “A farmer who grew his crop as ‘palusot’ in the rainy season showed me the plants that he had to uproot after these began to die because his field had been flooded,” he says. “He hung the withered plants that still had maturing fruits in his shed. Those fruits continued to develop and ripen. That’s why I now advise those who suffer the same predicament during the rainy months just to uproot and keep their plants that have unripe fruits.”

Ronald de la Cruz’s Fantastic F1 plants have not collapsed on their trellises because their fruits are still developing, but he also has to hold aside their foliage to show the young fruits.

Fantastic tomato’s fleshy tissues are its thick pericarps and the large placentas which are at the fruits’ core. Each fruit has only two to three locules (the cavities where the seeds are), giving consumers fleshier tomatoes for their viands.

From the 4,000 plants that he transplanted in early December, Manalastas began picking fruit on February 3. Up to the end of that month, after eight pickings at two-day intervals, he harvested 3,550 kilograms of Fantastic F1 which he sold at an average farmgate price of Php10 per kilo. Cortez’s conservative estimate is that each plant will produce from two-and-a-half to at least three kilos up to the end of March.

Cortez arranged for farmers and agritechnicians from Doña Remedios Trinidad town in Bulacan led by municipal agriculturist Leonora Bolinas to observe Manalastas’ Fantastic harvest and the already-fruiting crop of Ronald de la Cruz nearby, which he transplanted in January. The visitors asked the two Magumbali farmers, Aga and Cortez, many questions about their crop with the intention of growing the same in their farms.

The Secretary is an Organic Farmer