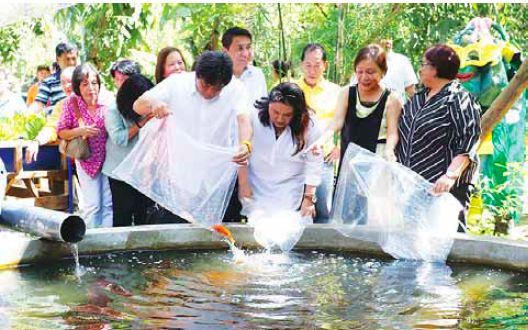 Sec. Alcala and Imelda Aguilar stocking tilapia in the pond.

Bright urban gardening ideas are showcased in an urban garden that Senator Cynthia A. Villar launched recently at her own garden in BF Resort Subdivision.

The garden is a 36-square meter open space planted to three varieties of lettuce. It also features a pond of red tilapia. Villar, chairperson of the Senate Committee on Agriculture and Food, said the garden is the forerunner of more gardens that she will help set up in urban areas around the country in partnership with the Senate Agriculture Committee, Department of Agriculture, Bureau of Fisheries and Aquatic Resources, and the Bureau of Plant Industry.

“Urban agriculture is a practice that will help us make wise use of open spaces in subdivisions and barangays. This is not only farming for the needs of the community. Later on, this will also be a source of income for the neighborhood,” Villar said.

Sec. Alcala and Imelda Aguilar stocking tilapia in the pond.

Villar noted that aside from planting food crops, urban agriculture also includes aquaculture. “The benefits to the community are numerous. Not only does urban farming provide a green space in the community, it also makes use of kitchen wastes as compost and used water to irrigate the soil,” she said.

Urban agriculture while encouraging healthy eating habits can also help build harmonious relationships among neighbors. “This is a shared project that will benefit the whole community,” Villar added.

Here, some plants are grown in plots while others are in hanging plastic containers under a modified hydroponics system.

She added that urban gardening has become popular not only in the Philippines but also in other
countries. Even in metropolitan cities like New York and in European countries, residents have
vegetable gardens in their homes. They find ways to put up their own vegetable garden even if they live in small apartments or condominium units, Villar said.

BFAR Program to Target ‘Poorest of the Poor’