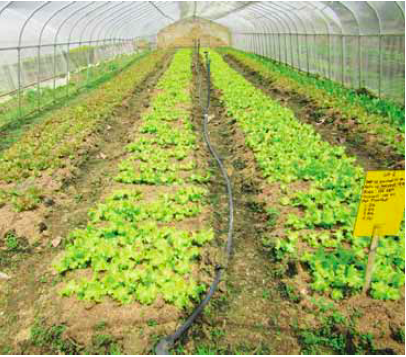 Lettuce under a greenhouse.

Did you know that Sec. Francis N. Pangilinan is also an organic farmer?

If one is a Secretary of Agriculture, it makes sense if you have your own farm so you will have a better understanding and appreciation of the realities in farming.

That’s probably the reason why Sec. Francis N. Pangilinan bought his own farm in Alfonso, Cavite in 2011: so he could have the feel of actually making the soil productive and profitable. He heads the Office of the President for Food Security and Agricultural Modernization (OPFSAM).

Sec. Kiko and his harvest of fruits and veggies.

We visited the 2.5-hectare Sweet Spring Country Farm of Sec. Kiko on February 21, a Saturday, to have a glimpse of what he is doing. He is determined to get into serious organic farming. As of now, however, his farm is not yet certified as an organic farm because it has to undergo some transition from a conventional farm to one that is organic. It takes at least three years to convert a conventional farm into an organic one.

Salad greens are the bulk of the production for the market. These include mostly different varieties of lettuce, arugula, parsley, tarragon fennel, coriander, and other herbs.

Kiko with a basket of salad greens.

Some of the harvest is sold in Tagaytay but he has a “Viber” group for whom he posts what is available from the farm. The members just pick up their orders at a place in Alabang.

There’s a running stream across the property. The water is pumped to a giant concrete tank at the highest point of the property and then brought to the growing area down below by gravity.

Most of the greenhouses and the outdoor plots are found in an area down below. You have to go down more than a hundred steps to reach the place. For the secretary, it gives him much-needed exercise going down and up. Aside from the salad greens and culinary herbs, there is an area where tomatoes, eggplant, ampalaya, and other ‘pinakbet’ vegetables are grown.

There are many things that Sec. Kiko would like to add, like robusta coffee, with the help of Nestle experts. There are old Barako and robusta coffee trees that are fruiting but their production is limited. Nonetheless, he has already come up with his packaged and roasted but not ground organic coffee beans. He says that it is best to brew newly ground coffee beans.

The next thing he would like to add is cacao so he can produce organic chocolate.

Right now, lodging facilities are being constructed. This is in anticipation of the day when the place will be converted into a training center for organic farming. That would be one way of advancing his advocacy for environment-friendly farming. Sec. Kiko is raising around 30 native and potbelly pigs, but not in the conventional commercial way. The piggery does have the usual foul odor encountered in conventional pig farms. Then he also takes care of native chickens that are freerange.

Lettuce under a greenhouse.

He also has a few coconut trees that were spared by the cocolisap scourge. From these trees, he is able to produce his own Ka Kiko All-Natural Coco Vinegar. He has also a few Kaong trees that are heavy with fruit bunches. If tapped, the Kaong trees could yield a lot of sap for making vinegar.

We also saw an old kamias tree that was heavily laden with fruits from the bottom of the trunk up to the top. Kamias juice can be a refreshing drink, especially when sweetened with honey and refrigerated for a few hours.

The lament of Sec. Kiko is that he cannot visit his farm as often as he would like to because he is busy with his assignment as the person in charge of OPFSAM.